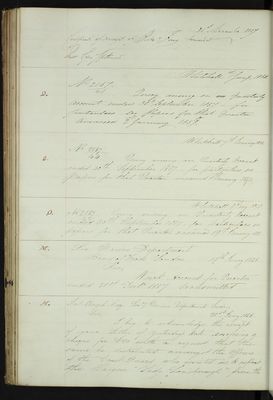 Sir, I beg to acknowledge the receipt of your Letter of yesterday's date enclosing a cheque for £20 with a request that the same be distributed amongst the Officers of the Coast Guard who assisted us to refloat the Barque "Lady Lonsborough" from the

Last edit 21 days ago by jrahardjo 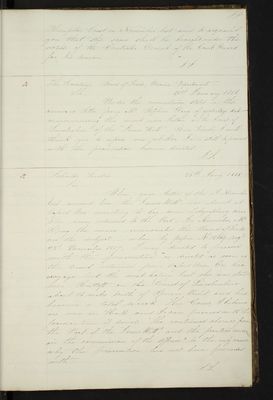 Hompton Coast in November last and to acquaint you that the same shall be brought under the notice of the Controller General of the Coast Guard for his decision.

The Secretary. Board of Trade, Marine Department 21st January 1858.

Sir, Under the circumstances stated in the annexed Letter from Mr Stephen Gray of yesterday's date– cummunicating the wreck near Sutton on the Coast of Lincolnshire of the "James Watt" Steam Vessel, I will thank you to inform me whether I am still to proceed with the prosecution herein directed.

Sir, When your letter of the 4th November last arrived here, the "James Watt" was absent at Orford Ness assisting to lay down Telegraphing Wires she never returned to the Port. In November, Mr Gray the owner memorialed the Board of Trade on the subject,– when by paper No 12569 regd 23d November 1857, I was directed to proceed with the prosecution as directed as soon as the Vessel returned from Orford Ness. On her voyage back the week before last she was stranded near [Hutton?] on the Coast of Lincolnshire about 25 miles south of Spurn Point, and has become a total wreck. The Crew, I believe are now in Hull and I can proceed with the prosecution if desired. 'The continued absence from the Port of the "James Watt" and the parties concerned in the commission of the Offence' is the only cause why the prosecution has not been proceeded with. 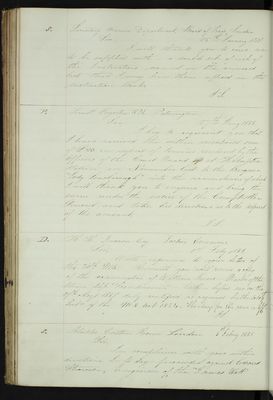 Sir, I will thank you to cause me to be supplied with – a double set – of each of the Instructions [passed?] in the annexed list that I pray have them affixed in the Instruction Books

Sir, I beg to requaint you that I have received the wither mentioned sum of £20 in respect of Services rendered by the Officers of the Coast Guard up at Hulmpton Station in November last to the Barque"Lady Lonsborough" into the circumstances of which I will thank you to enquire and bring the same under the notice of the Comptroller General, and take his directions as to the disposal of the amount.

Sir, With reference to your letter of the 30th [??to.] Herewith you will receive a copy of the examination of William Rivers – Master of the Steam Ship 'Scandinavian" – taken before me on the 17th Augt 1857 duly certified as required by the 449th Sectn of the MS Act 1854. The charge for the same is 3 s./6 d.

Sir, In compliance with your within directions, I – to day – proceeded against Edward Strowsen, Engineer of the "James Watt" 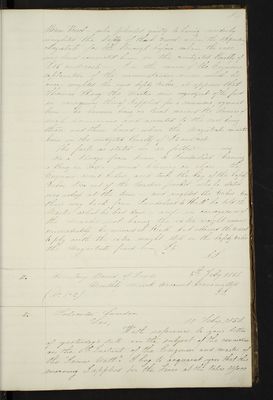 Steam Vessel – who pleaded guilty to having unduly weighted the Safety of that vessel when the stipendiary Magistrate for the Borough before whom the case was heard convicted him in the instigated Penalty of £15 and costs –– In the course of the Engineers explanation of the circumstances under which he over-weighted the said Safety Valve, it appears that Thomas Gray the Master was cognizant of the fact in consequence thereof I applied for a summons against him – he however being in Court waived the Service of such Summons and assented to the case being then and there heard when the Magistrate convicted him in the instigated Penalty of £5 and costs. The facts as stated are as follow––ing On a Passage from hence to Sunderland – having a Brig in Tow – wind blowing on shore – the Engineer went below and took the Key of the Safety Valve Box out of the Master's pocket who he stated was asleep at the time – and weighted the Valve on their way back from Sunderland to Hull he told the Master what he had done – and – in consequence of the Master not having the extra weight removed immediately he arrived at Hull, but allowed the vessel to ply with the extra weight still on the Safety valve the Magistrate fined him £5.

Secretary Board of Trade 5th Feby 1858

Sir, With reference to your letter of yesterday's date on the subject of the conviction on the 5th Instant of the Engineer and Master of the "James Watt", I beg to acquaint you that this morning I applied for the Fines at the Police Office 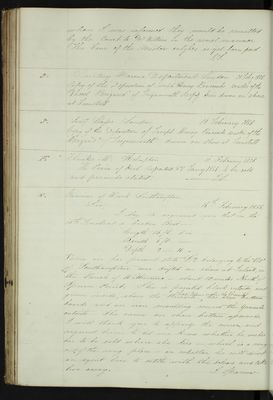 when I was informed they would be remitted by the Court to Mr Wilkins in the usual manner The Fine of the Master only has as yet been paid.

Copy of the Deposition of Joseph Henry Pincombe master of the Vessel "Brigand" of Teignmouth respg been driven on shore at Tunstall.

The Piece of Keel reported 22 Jany 1858. to be sold and proceeds stated.

Sir, I beg to acquaint you that on the 13th Instant a broken Boat ––

Value in her present state £2 belonging to the "[Pet?]" of Southampton was drifted on shore at Intack, in the Parish of Withernsea – about 10 miles North of Spurn Point. She is painted black outside, and green inside, – above the thwarts, lead colour under the thwarts, has close bottom boards and an iron moulding round the gunwale outside –– She came on shore bottom upwards. I will thank you to apprize the owner, and request him to let me know whether he wishes her to be sold where she lies – which is a very out of the way place – or whether he will direct an agent here to settle with the salvors and take her away.