Letter book for the Receiver of Wrecks at Kingston upon Hull, England, 1855-1861 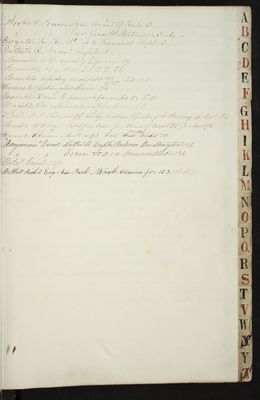 Last edit 20 days ago by A.Commoner 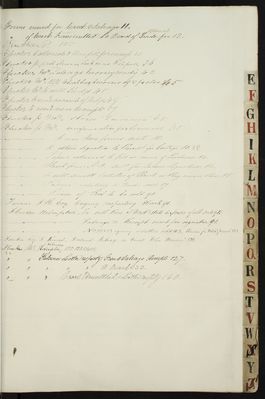 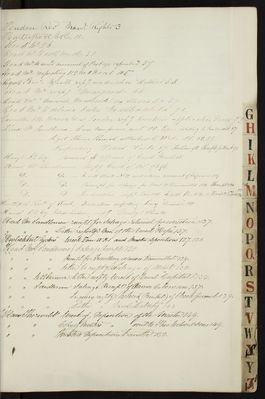 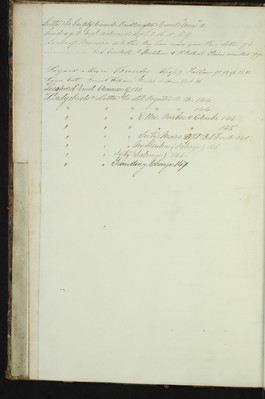 Last edit 14 days ago by A.Commoner 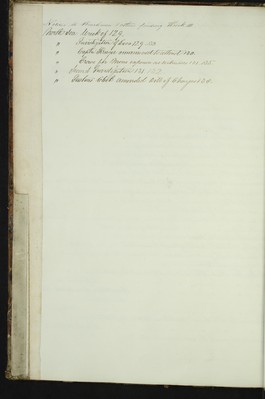 Last edit 2 months ago by kibrij 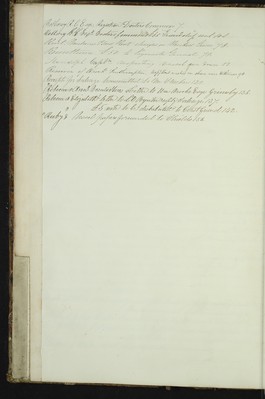 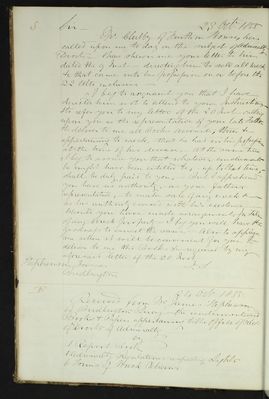 Sir Mr. Clubby of [Firth?] on [Howser?] has called upon me today on the subject of Admiralty [Drorts?] thus shewn me your letter to him dated the 9 Inst - directing him to sell all wreck &c that came into his possession on or before the 22 [?] inclusive -

I beg to acquaint you that I have directed him not to attend to your Instructions, [?] refer you to my letter of the 20 Inst - calling upon you as the representation of your late Father to deliver to me all Books Accounts, Notes &c appertaining to wreck, that he had in his possession at the time of his decease, - at the same time I beg to assure you that whatever emoluments he might have been entitled to, - up to that time, shall be duly paid to you, - But I apprehend you have no authority, - as your fathers representative, - to make sale of any wreck &c as his authority ceased with his existence should you have made arrangements for Sale of any wreck property - I beg you will have the goodness to cancel the same - Also to apprize me when it will be convenient for you to deliver to me the Books &c required by my aforesaid letter of the 20 Inst

Received from Mr James Stephenson of Bridlington Quay the undermentioned Books & Papers appertaining to the Office of Recr. of Droits of Admiralty

Last edit over 1 year ago by Susan R 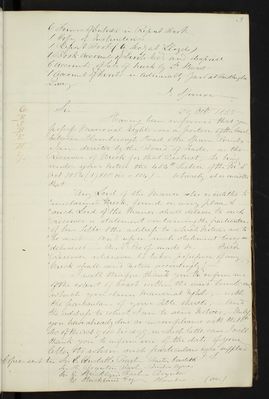 6 Forms of Entries in Report Book 1 Copy of Instructions 1 Report Book to Secy at Lloyds) 1 Book account of [Droits?] recd and [disposal?] 6 Accounts of Sale of Wreck by Lt. Stewart 1 Account of [droits?] in [Admiralty Zan at Bridlington?] [Quay?]

"Any Lord of the Manor who is entitled to "unclaimed Wreck, found on any place [etc. / &c?] - "such Lord of the Manor shall deliver to such "Receiver a statement containing the particulars "of his Title & the address to which notices are to "be sent -- and upon such statement being so "delivered -- and Proof made [etc. / &c?] -- such "Receiver whenever he takes possession of any "Wreck shall send notice accordingly," -

I will therefore thank you to inform me of the extent of Coast within the said limits over which you claim Manorial rights, --with the particulars of your Title thereto, -- and the address to which I am to send notices, -- Unless you have already done so in compliance with the [10th?] Sec of the act 9 & 10 [?] -- in which latter case I will thank you to inform me of the date of your letter & to whom such particulars were supplied J.S. Copies sent to - [Sir C Constable ? Burton Constable] [Sir H. Boynton ? Burton Agnes] [Sir ?. Strickland ? Boyton] [W. Strickland Esq. Flambro] - (over)

Last edit over 2 years ago by David Kaminski 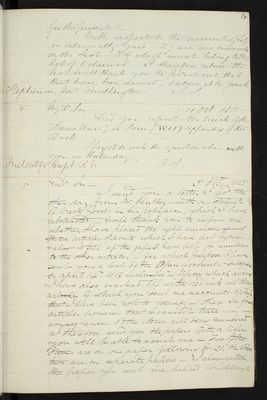 With respect to the account of Lots in Admiralty Yard - 27 are are enumerated on the List - 3 of which must belong to the lot of 5 claimed - I therefore return the list & will thank you to point out the 3 that have been claimed, & return it to [?] Stephenson [?] Bridlington J.S.

I forgot to ask the question when with you on Saturday

I send you a letter I recd the other day from Mr Clubbey - with a statemt of Wreck Goods in his Possession, which I have abstracted - & will thank you to inform me whether I have placed the right numbers against those articles opposite which I have put figures, & also to fill up the gaps I have left for numbers to the other articles - for which purpose I have sent you a list of the Open accounts - subsequent to April 14th 1854 inclusive - Upon which account I have also marked off with red ink all those articles of which you sent me accounts of Sale that I have been able to identify - there are four articles however that I cannot trace in consequence of the items not being numbered I therefore send you the papers with a hope you will be able to assist me - Two of the Items are on one paper following No. 121. the other two are on seperate papers - I also return the paper you sent me headed "Bridlington

Last edit 20 days ago by A.Commoner 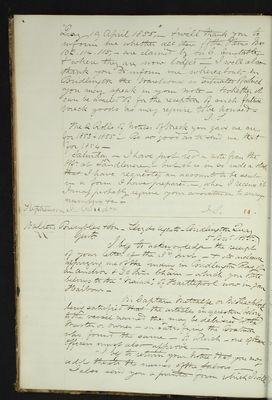 Quay 19 April 1855" - & will thank you to inform me whether all three of the Items Nos 102, 114, 115 - are claimed by Sir C. Constable, & where they are now lodged - I will also thank you to inform me whereabouts in Bridlington the warehouse is situated of which you may speak in your note - & whether it can be availed of for the reception of such future wreck goods as may require to be housed - J.S.

Saturday - I have just recd a note from the Offr at Sandlemere, - but it is in so rude a state that I have requested an account to be sent in a form I have prepared. - when I receive it I may probably require your assistance to arrange numbers [?] Stephenson [?] Bridn

I beg to acknowledge the receipt of your letter of the 3rd Inst - & its inclosure apprizing me of the finding in Bridlington Bay of an anchor and 30 [?] chain - which you state belongs to the "Naiad", of Hartlepool now in your Harbour -