Resolution from Kentucky's Congress regarding payments to the widows and orphans of War of 1812 soldiers, 20 January 1816

ReadAboutContentsHelp
Resolution approved by Kentucky's Congress and Governor asking the United States Congress to make a "prompt and liberal allowance" to the orphans and widows of the militiamen who had lost their lives during the War of 1812. 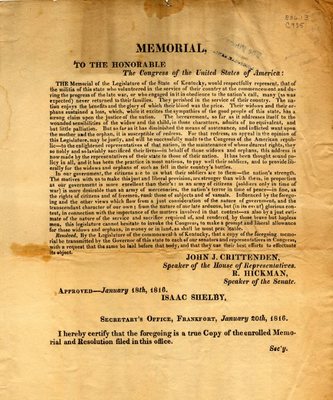 MEMORIAL, TO THE HONORABLE The Congress of the United States of America:

THE Memorial of the Leigislature of the State of Kentucky, would respectfully represent, that of the militia of this state who volunteered in the service of their country at the commencement and during the progress of war, ir engagedin it in obediecnce to the nation's call, many(as was expected) never returned to their families. They perished in the sevice of their country. The nation enjoys the benefits and the glory if which thier blood was the price. Their widows and their orphans sustained a loss, which, which, while it excites the sympathies of the good people of this state, has a strong claim upon the justice of the nation. The bereavement, so far as it addresses itself to the wounded seneibilities of the widow and the child, in those characters, admits of no equivalent, and but little palliation. But so far little palliation. But so far as it has diminished the means os sustemance, and inflicted want upon the mother and orphan, it is susceptible of redness. For that redness, appreal in the opinion of this Legislature, may be justly, and will be successfully made to the Congress of the American republic-to the enlightened representatives of the nation, in the maintenance of whose dearst rights, they so nobly and lavishly sacificed thier lives-in behalf of those widows and orphans, this address is now made by the representatives of their nation, to pay well their soldiers, and to provide liberally for the window and orphans of such as fell in their country's battles. In out goverment is more excellent then their's: as an army of citizens (soldiers only in time of war) is more desirable than an armu of mercenaries, the nation's terror in time of peace- in line, as the rights of citizens and of freemen, rank those of subects and of vassales. Influenced the Foregoing and the other view which flow from a just consideration of the nature of the government, and the transcendant charactor of our own ; from the nature of our late arduous, but (in its event) glorious contest, in connention with the importance of the matters, involved in that contest-asalso by a just estimate of the nature of the service and sacrifice required of, andrendered by those brave but hapless men, this legislature cannot hesitate to invoke the Congress, to make prompt and liberal allowance for those widows and orphans, in money or in land, as shall be most prac icable. Resolved, By the Legistature of the commonwealth of Kentucky, that a copy of the foregoing memorial be transmitted by theGovernor of this stats toeach of our senators and representatives in Congress, with a request that the same be laid before that body, and that they use their best efforts to effectuate the object. JOHN J. CRITTENDEN, Speaker of the House of Representatives. R. HICKMAN, Speaker of the Senate. APPOVED- January 18th, 1816 ISAAC SHELBY.

I hereby certify that the foregoing is true Copy of the enrolled Memorial and and Resolution filed in this office. Sec'y