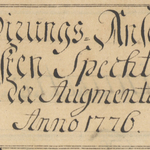 This collection is comprised of seventy muster rolls and 15 additional letters and documents of the German regiments employed by the British to fight in the American Revolutionary War.

34 [Oversize Manuscript]. Names and reasons of absence of the Officers of the Foreign Troops, who were not present at the Muster taken at New York to the 24 June 1782. Enclosed in W[illiam] Porter ALS to the Earl of Shelburne, August 5, 1782.

over 1 year agodaviswt wrote Having the same problem as Carol above and will continue to experiment.
over 1 year agoCarolTaras wrote There are six columns and 2nd column has the most script and 3,4,5,6 columns have small numeric e...
over 2 years agosmschluederberg wrote What is the best way to transcribe the repetition (ditto) for Private in table? I used several un...
Show More