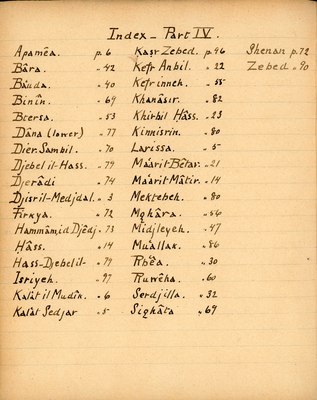 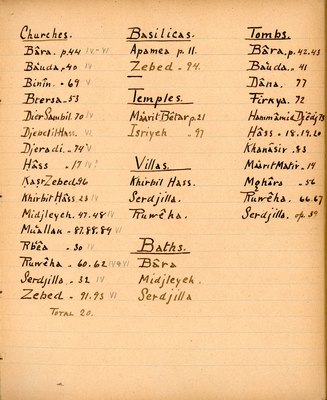 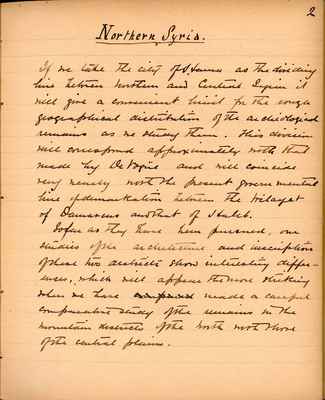 If we take the city of Hannu as the dividing line between Northern and Central Syria it will give a convenient limit for the rough geographical distribution of the archeological remains as we study them. This division will correspond approximately with that made by de Vogüé and will coincide very nearly with the present governmental line of demarkation between the Wilayet of Damascus and that of [??Hulch]

So far as they have been pursued, our studies of the architecture and inscription of these two districts show interesting differences, which will appear the more striking when we have made a careful comparative study of the remains in the mountain districts of the north with those of the central plains

Last edit 11 months ago by Jannyp 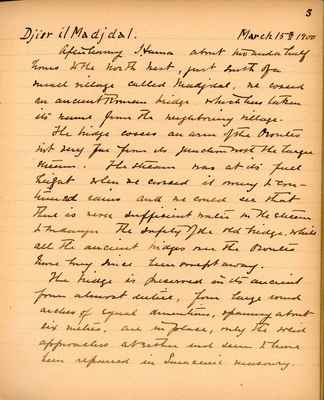 After leaving Hama about two and a half hours to the north west, just south of a small village called Mudjdal, we crossed an ancient Roman bridge which has taken its name from the neigbouring village.

The bridge crosses an arm of the Orontes not very far from its junction with the larger stream. The stream was at its full height when we crossed it owing to con tinued rains and we could see that there is never sufficient water in the stream to endanger the safety of the old bridge, while all the ancient bridges over the Orontes have long since been swept away.

The bridge is preserved in its ancient form almost entire, four large round arches of equal dimentions, spanning about six metres, are in place, only the solid? approaches at either end seem to have been repaired in Saracenic masonry.

Last edit 12 months ago by Lrhudgins 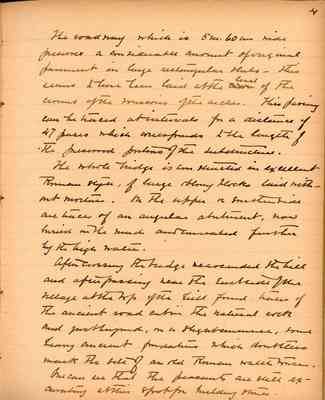 The road way which is 5 m. 60 cm wide preserves a considerable amount of original pavement in large rectangular slabs. This seems to have been laid at the level of the crowns of the voussoir of the arches. This paving can be traced at intervals for a distance of 47 paces which corresponds to the length of the preserved portions of the substructure.

The whole bridge is constructed in excellent Roman style of large oblong blocks laid without mortar. On the upper or southern side are traces of an angular abutment, now buried in the mud and concealed further by the high water.

After crossing the bridge we ascended the hill and after passing near the eastside of the village at the top of the hill found traces of the ancient road cut in the natural rock and just beyond, on a slight eminence, some heavy ancient foundations which doubtless mark the site of an old Roman watch tower.

One can see that the peasants are still excavating at this spot for building stones.