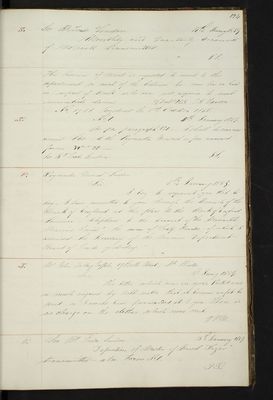 The Receiver of Wreck is requested to remit to this department so much of the balance he now has on hand in respect of Wreck as he does not require to meet immediate claims. No. 1788 Registered the 2nd October 1858.

P. Paymaster General London 5th January 1859 Sir, I beg to acquaint you that to day, I have remitted to you through the Branch of the Bank of England at this place to the Bank of England London -- to be placed to the Account of the Mercantile Marine Fund the sum of Sixty Pounds -- of which I advised the Secretary of the Marine Department Board of Trade yesterday.

J. Mr John Tulley Jeffels, 17 Bath Street, 8th Shields 3d Jany 1859. Sir, The letter which was in your Pocket was so much injured by salt water that it became unfit to send or I would have forwarded it to you. There is no charge on the clothes which were sent. W P M

Last edit 10 months ago by vant 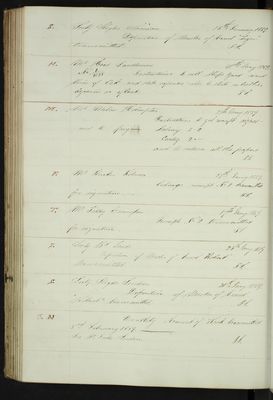 Last edit 8 months ago by heidimarie 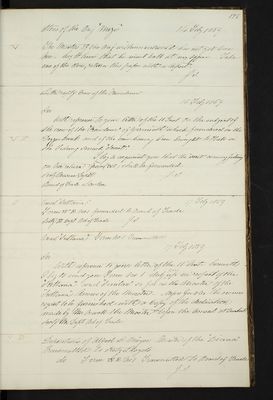 The Masters of the Brig within mentioned has not yet been here. Say to him that he must call at my office. Take care of the stores, return this paper with a report.

With reference to your letter of the 11th Inst on the subject of the crew of the "Providence" of Yarmouth which foundered on the Dogger Bank and of the crew having been brought to Hull in the Fishing Smack "Secret."

I beg to acquaint you that the "Secret" is away fishing on her return {from} form (WI) shall be forwarded.

Form WR no 1 forwarded to Board of Trade Secty M Dept. Bd of Trade

With reference to your letter of the 11th Inst herewith I beg to send you Form no 1 duly filled up in respect of the "Sultana" and ["Smilase"?] so far as the Master of the "Sultana" knows of the [Morster?] -- [Mfors?] Ger & Co the owners request to be furnished witha copy of the declaration made by Mr Coswell the Master before the Consul at Dunkirk

Last edit about 1 month ago by Colin_Samuels 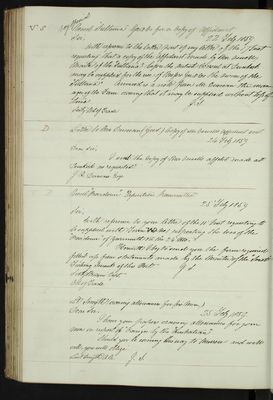 Vessel "Sultana" [G?] for a copy of affidavit 22 [Feby] 1859 Sir, With reference to the latter part of my letter of the 17 [J?] requesting that a copy of the affidavit made by Mr [Cowell?], Master of the "Sultana" before the british Consul at Dunkirk may be supplied for the use of [Messrs?] [G?] the owner of the "Sultana" [Annexed?] is a note from Mr Duncan the man -ager of the Firm [?ing] that it may be supplied without lots of time [JS?] [Secty?] Bd]of Trade

Herewith I beg to send you the form required filled up from statements made by the Master of the "Sonet" Fishing [Sma?] of this Port. JS Secty Marine [Dept?] Bd of Trade

Should you be coming this way to morrow and will call, you will oblige. Lieut Smyth [AN?] JS

Last edit about 1 month ago by Emzo67 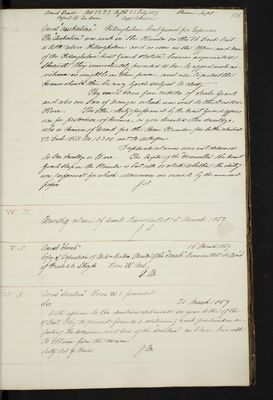 The "Australian" sunk in the Humber on the [16?] [Deck Dech?] last a little above Killingholme and as soon as the officer and men of the Killingholme Coast Guard Station became acquainted therewith they immediately proceeded to her to afford such as-sistance as might be in their power - and also to protect the Revenue should there be any goods subject to duty.

They [saved?] some four [cut?] of [s?], Gears and also one box of oranges which was sent to the Custom House.

The other duty performed by the Coast Guard [Officers?] was for protection of Revenue, as you directed Mr [Sas?] who is Receiver of Wreck for the River Humber per letter dated 22 [deck?Dech?] 1850 No 13380 not to [interfere?].

Duplicate claims were not delivered to the [S?] or to me. The Captain of the ["Bo?" ships name] the Coast Guard Ship in the Humber is best able to state whether the duty was performed for which allowances are covered by the annexed papers. JS

Copy of Depositions of Willm [Slater?] Master of the "Sarah" transmitted to Board of Trade also [Lingets?] Form W no 1 JM

Vessel ["Similax"?] form W 1 forwarded. 21 March 1859 Sir With reference to the directions contained in your letter of the 17 last, I beg to foward form w 1 containing such particulars respecting the collision, and loss of the ["Similax"?] as I have been able to obtain from the owner Secty Bd of Trade JM