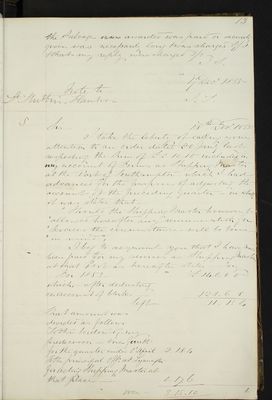 the Salvage awarded was paid [?] security given was necessarily long & was charged 9/- and that my reply was charged 2/3-. JS 17 Dec 1853 J.S. 18 Dec 1853 Sir I take the liberty of calling your attention to an order dated 20 Jany last respecting the sum of £2.10.10 included in my account of forms as Shipping Master at the Port of Southampton which I had advanced for the purpose of adjusting the account of the preceding quarter - in which it was stated that "should the Shipping Master however be "allowed hereafter any remuneration for "Services the circumstance will be borne "in mind", I beg to acquaint you that I have since been paid for my services as shipping Master at that Post as hereafter states - [?] For 1853 - £140.0.0. which, after deducting on account of Clerks - £128.6.8 left 11.13.4 That amount was divided as follows To the widow of my predecessor - one fourth for the auarter ended 5th April 2.18.4 For the principal Offr. at Lymington for Acting Shipping Master at that place - 0.17.6 over 3.15.10

Last edit over 2 years ago by Joan 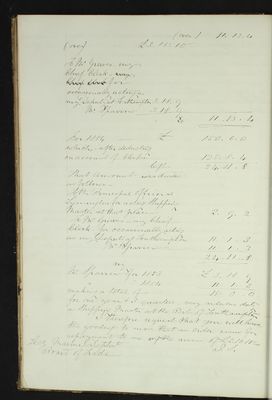 Last edit over 2 years ago by elainehinch 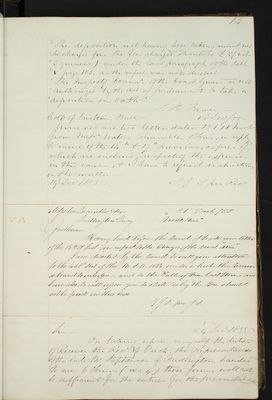 " The deposition not having been taken, must not " be charged for. The fee charged should be £2. (not " 3 guineas) under the last paragraph of the table " V. page 105. as the vessel was not derilect " The Inspecty. Comm. of the Coast Guard is not " authorized by the Act of parliament to take a " deposition on oath"

Messrs Wm Brambles & Son 21 Decb/55 Bridlington Quay "Vessel Ana" Gentlemen Having laid before the Board of Trade your letters of the 15 & 18 Inst in respect to the charges of the vessel "Ana" I am directed by the Board to call your attention to the 468 sect of the M.S.A. 1854 under which the Receiver is bound to interfere, and to the Table of fees, last item, and I am also to call upon you to state why the fee should not be fixed in this case. T.J.S. per J.S.

Sir 24 Dec 1855 On taking upon myself the duties of Receiver the Rec of Wreck, the Representative of the late Mr Stephenson of Bridlington, handed to me 6 Forms ( w c 4 ) these forms will not be sufficient for the entries for the present Master 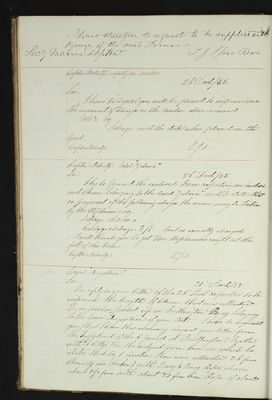 I have therefore to request to be supplied 1 quire of the said forms - Secr Marine Deptmt L.J. Spro Rec

Captain Metcalfe, respecting an anchor 26 Decb/55 Sir I have to request you will be pleased to inform me the amount of charges on the anchor above named No/83, viz Salvage and the date when placed in the yard Captn Metcalfe

Captn Metcalfe vessel "Zalina" Sir: 26 Decb/55 I beg to forward the enclosed Form respecting an Anchor and claim belonging to the vessel "Zalina" and to state that on payment of the following charges the sum may be taken by Mr Stephenson viz. Salvage £2. 10 - 0 Cartage & Salvage 2s/6d. Rent as usually charged. I will thank you to get Mr Stephenson's receipt at the foot of this form Captn Metcalfe T. J.S.

Vessel "Augustine" Sir 31 Decb/55 In reply to your letter of the 26 Inst requested to be informed the length of chain that was attached to an anchor picked up in Bridlington Bay belonging to the vessel "Augustine" of your Port. I have to acquaint you that I have this morning received your letter from the Inspy Lieut of the C. Guard at Bridlington together with a letter on the subject from him in which he states that to 1 Anchor there were attached 36 fins Chain 7/8 ins (broken) with Buoy & Buoy Rope chain about 1/2 fin with about 20 fins Coir Rope of about 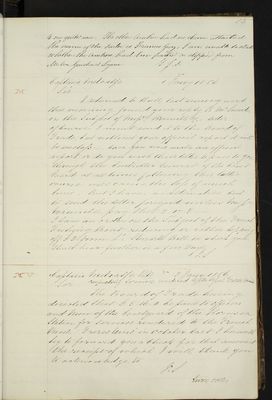 4 ins quite new. The other Anchor had no chain attached The name of the sailor is Ferancis Grey, I am unable to state whether the anchors hadbeen parted or slipped from Mr Wm Gouchard Lymn ??? Y.J.S.

Captain Metcalfe 1 Jany 1856 Sir I returned to Hull last evening word this morning found your reply to Mr Snowden on the subject of Messrs Bramble & Ss letters. Of course I must send it to the Board of Trade, but without your official report it will be useless. Can you now make an official report or do you wish their letter to pass to you, through the Controller General of the Coast Guard at all times following this letter course, will cause the loss of much time. But I have no alternative but to send the letter forward unless Messrs Bramble pay the £2. 17. 3 I have an order on the subject of the French Fishing Boat reducing or rather lopping off £3 from Lt Stewart's Bill on which you shall hear further in a few days J.S. Marginalia M V

Sir The Board of Trade having decided that £5 . 16 . 0 be paid to officers and men of the Coastguard of the Hornsea Station for services rendered to the French vessel "Freres Unis" in October last I herewith beg to forward you a check for that amount the receipt of which I will thank you to acknowledge to J.S turn over