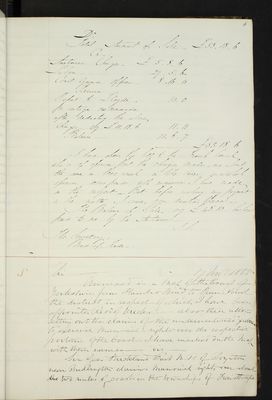 I have shown the bill to the French Consul who is of opinion that the charges made, are about the same as those usual in like cases, and which opinion compares with enquiries I have made on the subject. But before making any payment in the matter I crave your directions thereon.

The Balance of Sale viz £48.10 has been paid to me by the Auctioneer

The Secretary, Board of Trade.

Annexed is a map of the Coast of Yorkshire from Flambro Head to Spurn Point the district in respect of which I have been appointed Recr of Wrecks - also three letters seting out the claims of the undermentioned gentlemen to exercise manorial rights over the respective portions of the Coast I have marked on the map with their names viz Sir Geo Strickland Mart M.P. of Boynton near Bridlington claims Manorial rights over about two miles of coast in the township of Fraisthorpe 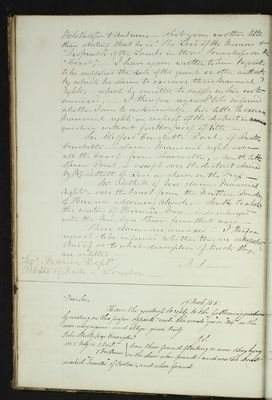 Wilsthorpe & Auburn, but gives no other title than stating that he is " the Lord of the Manors & "Proprietor of the Lands in thse townships on this "Coast", I have again written to him & requested to be supplied the date of the grant or other authority by which he claims to exercise those manorial rights, which he omitted to supply in his note annexed. I therefore request to be informed whether I am to acknowledge his title to exercise manorial rights in respect of the district in question without further proof of title.

Sir Clifford Constable Bart of Burton Constable claims Manorial rights over all the coast from Barmston, south to the Spurn Point, except over the district claimed by Mr Bethell of Rise as shewn on the map.

Mr Bethell of Rise claims Manorial Rights over the Coast from the Northern Boundary of Hornsea adjoining Atwick, south to where the waters of Hornsea Mere is discharged into the Sea by a stream from the mere.

Have the goodness to reply to the following questions by writing on this paper opposite each the words "yes" or "no" as the case may require and oblige yours truly J.S.

John Clubley Esqr Easington 1855 Feby 14. 1 Boat 1 Fir Beam Were these found floating or were they lying on the shore when found - and was the Boat marked "Traveller" of Boston, and where found 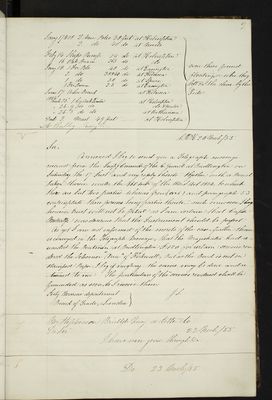 were these found floating, or were they left on the shore by the Tide.

C.H.H 20 Novb /55 Sir, Annexed I beg to send you a Telegraph message received from the Inspg Commdr of the C.Guard at Bridlington on Saturday the 17 Inst and my reply thereto together with a Bond taken thereon under the 468 sectn of the M.S Act 1854, to which there are but two parties whereas from (W 6) and paragraph 53 contemplate three persons being parties thereto - such omissions I {beg} however trust will not be fatal as I am certain that Captn Metcalfe was desirous that the Instrument should be perfect. As yet I am not informed of the merits of the case, further than is conveyed in the Telegraph message, that the Magistrate had a warded the Boatmen at Bridlington £120 for certain services rendered the Schooner "Ana" of Kirkwall, But as the Bond is not on stamped paper. I beg if necessary the same may be done an returned to me. The particulars of the services rendered shall be forwarded as soo as I receive them.

I have now gone through &c 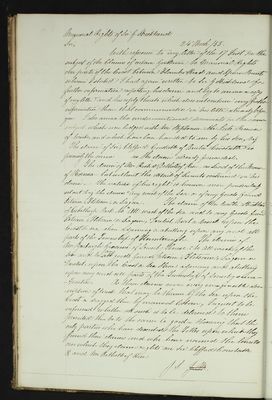 With reference to my letter of the 17 Inst on the subject of the Claims of certain Gentlemen to Manorial Rights over parts of the Coast between Flambro Head and Spurn Point, wherein I stated I had again written to Sir G. Strickland for further information respecting his claim and beg to annex a copy of my letter and his reply thereto which does not contain any further information than that communicated in his letter already before you. I also annex the undermentioned documents on the same subject which was lodged with Mr Stephenson the late Receiver of Wrecks, and which have been handed to my by his son, viz

The claim of Sir Clifford Constable of Burton Constable is precisely the same as the claim already forwarded. 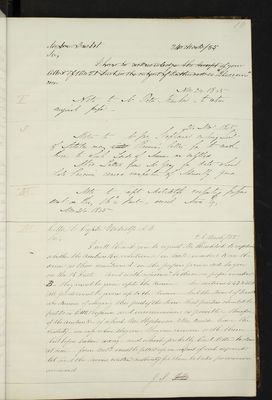 I will thank you to request Mr Shacklock to explain whether the Anchors viz mentioned in note marked A are the same as those mentioned in the papers forwarded to you on the 16 Inst. And with reference to those on paper marked B - they must be given up to the Receiver. but the Board of Trade are desirous of carrying this part of the Law, that parties should be put to as little expense and inconvenience as possible therefore if the anchors &c of which Mr Stephenson & Mr Walker have the Custody are safe where they are they can remain with them but before taken away and which probably had better be done at once form no 13 must be filled up in respect of each separate lot and the Owners written authority for them to take possession annexed.