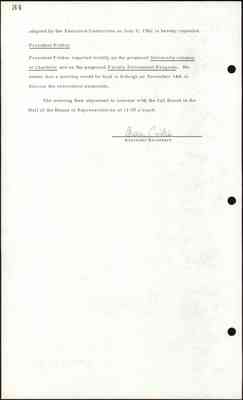 adopted by the Executive Committee on July 9, 1962 is hereby repealed.

President Friday reported briefly on the proposed University campus at Charlotte and on the proposed Faculty Retirement Program. He states that a meeting would be held in Raleigh on November 14th to discuss the retirement proposals.

The meeting then adjourned to convene with the full Board in the Hall of the House of Representatives at 11:00 o'clock. 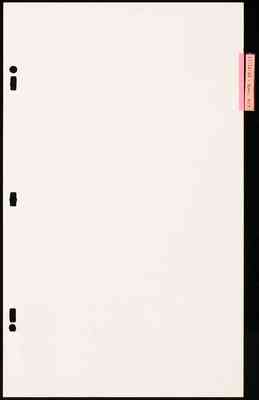 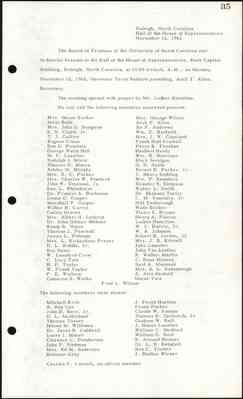 Raleigh, North Carolina Hall of the House of Representatives November 12, 1962

The Board of Trustees of the University of North Carolina met in Special Session in the Hall of the House of Representatives, State Capitol Building, Raleigh, North Carolina, at 11:00 o'clock, A.M., on Monday, November 12, 1962, Governor Terry Sanford presiding, Arch T. Allen, Secretary.

The following members were absent: 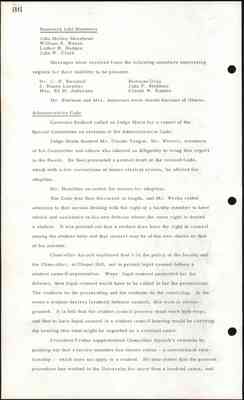 Messages were received from the following members expressing regrets for their inability to be present:

Mr. Stedman and Mrs. Anderson were absent because of illness.

Governor Sanford called on Judge Mintz for a report of the Special Committee on revision of the Administrative Code.

Judge Mintz thanked Mr. Claude Teague, Mr. Weaver, members of his Committee and others who labored so diligently to bring this report to the Board. He then presented a printed draft of the revised Code, which with a few corrections of minor clerical errors, he offered for adoption.

The Code was then discussed at length, and Mr. Weeks called attention to that section dealing with the right of a faculty member to have advice and assistance in his own defense where the same right is denied a student. It was pointed out that a student does have the right to counsel among the student body and that counsel may be of his own choice or that of his parents.

President Friday supplemented Chancellor Aycock's remarks by pointing out that a faculty member has tenure status - a contractural relationship - which does not apply to a student. He also stated that the present procedure has worked in the University for more than a hundred years, and 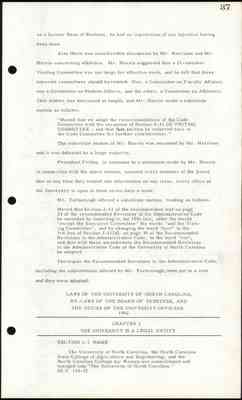 as a former Dean of Students, he had no impression of any injustice having been done.

The substitute motion of Mr. Harris was seconded by Mr. Harrison and it was defeated by a large majority.

President Friday, in response to a statement made by Mr. Harris in connection with the above motion, assured every member of the Board that at any time they wanted any information on any issue, every office of the University is open to them seven days a week.

Thereupon the Recommended Revisions in the Administrative Code, including the substitutions offered by Mr. Yarborough, were put to a vote and they were adopted.

CHAPTER 1 THE UNIVERSITY IS A LEGAL ENTITY