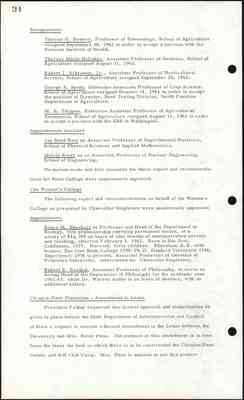 Thomas G. Bowery, Professor of Entomology, School of Agriculture resigned September 30, 1962 in order to accept a position with the National Institute of Health.

M. E. Thigpen, Extension Assistant Professor of Agricultural Economics, School of Agriculture resigned August 31, 1962 in order to accept a position with the ERS in Washington.

Melvin Reier as an Associate Professor of Nuclear Engineering, School of Engineering.

On motion made and duly seconded the above report and recommendations for State College were unanimously approved.

The following report and recommendations on behalf of the Woman's College as presented by Chancellor Singletary were unanimously approved:

Robert B. Rosthal, Assistant Professor of Philosophy, to serve as Acting Head of the Department of Philosophy for the academic year 1962-63, while Dr. Warren Ashby is on leave of absence, with no additional salary.

President Friday requested that formal approval and authorization be given to place before the State Department of Administration and Council of State a request to execute a Second Amendment to the Lease between the University and Mrs. Betsy Penn. The purpose of this amendment is to free from the lease the land on which there is to be constructed the Chinqua-Penn Center and 4-H Club Camp. Mrs. Penn is anxious to see this project 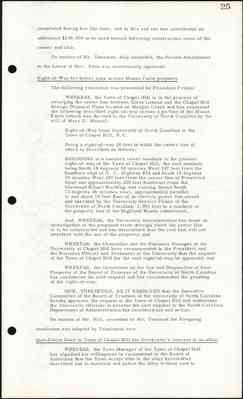 completed during her life time, and to this end she has contributed an additional $250,000 to be used toward defraying construction costs of the center and club.

On motion of Mr. Umstead, duly seconded, the Second Amendment to the Leave of Mrs. Penn was unanimously approved.

The following resolution was presented by President Friday:

WHEREAS, the Town of Chapel Hill is in the process of enlarging the sewer line between Glenn Lennox and the Chapel Hill Sewage Disposal Plant located on Morgan Creek and has requested the following described right-of-way across a portion of the Mason Farm (which was devised to the University of North Carolina by the will of Mary E. Mason):

Right-of-Way from University of North Carolina to the Town of Chapel Hill, N. C.

Being a right-of-way 20 feet in width the center line of which is described as follows:

BEGINNING at a sanitary sewer manhole in the present right-of-way of the Town of Chapel Hill, the said manhole being South 18 degrees 50 minutes West 747 feet from the Southern edge of N. C. Highway #54 and South 18 degrees 50 minutes West 285 feet from the center line of Prestwick Road and approximately 200 feet Southeast from the Glenwood School Building; and running thence South 13 degrees 46 minutes west, approximately parallel to and about 10 feet East of an electric power line owned and operated by the University Service Plants of the University of North Carolina, 1,061 feet to a manhole at the property line of the Highland Woods subdivision.

And, WHEREAS, the University administration has made an investigation of the proposed route through which the sewer line is to be constructed and has determined that the said line will not interfere with the use of the property; and

WHEREAS, the Committee on the Use and Disposition of Real Property of the Board of Trustees of the University of North Carolina has considered the said request and has recommended the granting of the right-of-way;

On motion of Mr. Hill, seconded by Mr. Umstead the foregoing resolution was adopted by Unanimous vote.

Quit-Claim Deed to Town of Chapel Hill for University's interest in an alley.

WHEREAS, the Town Manager of the Town of Chapel Hill has signified his willingness to recommend to the Board of Aldermen that the Town accept title to the alley hereinafter described and to maintain and police the alley without cost to 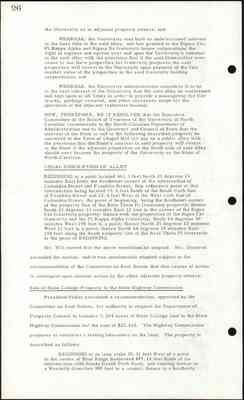 the University or to adjacent property owners; and

WHEREAS, the University administration considers it to be in the best interest of the University that the said alley be maintained and kept open at all times in order to provide a passageway for fire trucks, garbage removal, and other necessary usage for the operation of the adjacent fraternity houses;

NOW, THEREFORE, BE IT RESOLVED that the Executive Committee of the Board of Trustees of the University of North Carolina recommends to the North Carolina Department of Administration and to the Governor and Council of State that the interest of the State in and to the following described property be conveyed to the Town of Chapel Hill for use as a public alley with the provision that the State's interest in said property will revert to the State if the adjacent properties on the South side of said alley should ever become the property of the University or the State of North Carolina.

Mr. Hill moved that the above resolution be adopted. Mr. Umstead seconded the motion, and it was unanimously adopted subject to the recommendation of the Committee on Real Estate that this course of action is contingent upon similar action by the other adjacent property owners.

Sale of State College Property to the State Highway Commission

President Friday presented a recommendation, approved by the Committee on Real Estate, for authority to request the Department of Property Control to transfer 9.204 acres of State College land to the State Highway Commission for the sum of $27,612.

The Highway Commission proposes to construct a testing laboratory on the land. The property is described as follows:

BEGINNING at an iron stake 30.31 feet West of a point in the center of Blue Ridge Boulevard 877.12 feet South of its intersection with Reedy Creek Park Road, and running thence in a Westerly direction 900 feet to a corner; thence in a Southerly 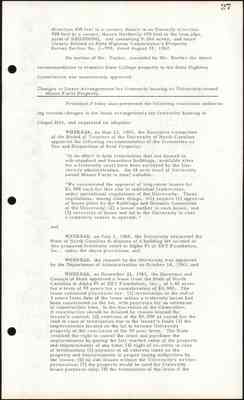 On motion of Mr. Taylor, seconded by Mr. Barber the above recommendation to transfer State College property to the State Highway Commission was unanimously approved.

WHEREAS, on May 23, I960, the Executive Committee of the Board of Trustees of the University of North Carolina approved the following recommendation of the Committee on Use and Disposition of Real Property;

"In an effort to help fraternities that are housed in sub-standard and hazardous buildings, available sites for a fraternity court have been surveyed by the University administration. An 18 acre tract of University owned Mason Farm is most suitable.

WHEREAS, on July 1, I960, the University requested the State of North Carolina to dispose of a building lot located in this proposed fraternity court to Alpha Pi of ZBT Foundation, Inc. , under the above provisions; and

WHEREAS, the request by the University was approved by the Department of Administration on October 18, 1961; and

WHEREAS, on November 21, 1961, the Governor and Council of State approved a lease from the State of North Carolina to Alpha Pi of ZBT Foundation, Inc., of 1.42 acres for a term of 99 years for a consideration of $5,000. The lease contained provisions for: (1) termination at the end of 3 years from date of the lease unless a fraternity house had been constructed on the lot, with provision for an extension of construction time, in the discretion of the Chancellor, if construction should be delayed by reason beyond the lessee's control; (2) retention of the $5, 000 as rental for the land in case of termination due to the lesser's fault; (3) the improvements located on the lot to become University property at the conclusion of the 99 year term. The State retained the right to cancel the lease and purchase the improvements by paying the fair market value of the property and improvements at any time; (4) right of re-entry in case of termination; (5) payment of ad valorem taxes on the property and improvements to proper taxing authorities by the lessee; (6) no sub-leases without the University's written permission; (7) the property would be used for fraternity house purposes only; (8) the termination of the lease if the 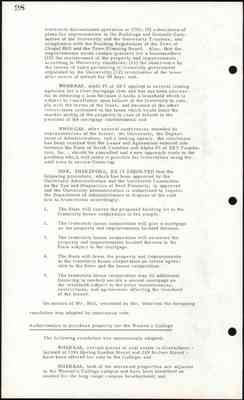 fraternity discontinued operation at UNC; (9) submission of plans for improvements to the Buildings and Grounds Committee of the University and the University Trustees, and compliance with the Building Regulations of the Town of Chapel Hill and the Town Planning Board. Also, that the improvements would contain quarters for a housemother; (10) the maintenance of the property and improvements according to University standards; (11) the observance by the lessee of rules pertaining to fraternity government stipulated by the University; (12) termination of the lease after notice of default for 30 days; and,

WHEREAS, Alphi Pi of ZBT applied to several lending agencies for a first mortgage loan and has not been successful in obtaining a loan because it holds a leasehold which is subject to cancellation upon failure of the fraternity to comply with the terms of the lease, and because of the other restrictions contained in the lease which would limit the market ability of the property in case of default in the payment of the mortgage indebtedness; and

WHEREAS, after several conferences attended by representatives of the lessee, the University, the Department of Administration, and a lending agency, the conclusion has been reached that the Lease and Agreement entered into between the State of North Carolina and Alpha Pi of ZBT Foundation, Inc. , should be cancelled and a new approach made to the problem which will make it possible for fraternities using the said area to secure financing;

On motion of Mr. Hill, seconded by Mr. Umstead the foregoing resolution was adopted by unanimous vote.

Authorization to purchase property for the Woman's College

The following resolution was unanimously adopted:

WHEREAS, certain pieces of real estate in Greensboro located at 1101 Spring Garden Street and 210 Mclver Street have been offered for sale to the College; and

WHEREAS, both of the aforesaid properties are adjacent to the Woman's College campus and have been identified as needed for the long range campus development; and