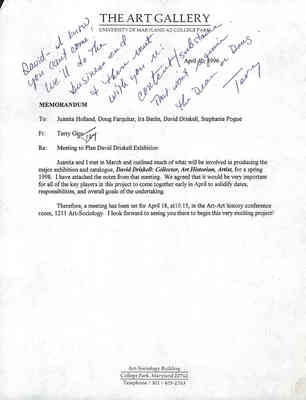 THE ART GALLERY UNIVERSITY OF MARYLAND AT COLLEGE PARK

David -- I know you can't come. We'll do the business end & then meet with you re: content/substance that won't require the Dean or Doug. [SIGNED] Terry

Juanita and I met in March and outlined much of what will be involved in producing the major exhibition and catalogue, "David Driskell: Collector, Art Historian, Artist," for a spring 1998. I have attached the notes from that meeting. We agreed that it would be very important for all of the key players in this project to come together early in April to solidify dates, responsibilities, and overall goals of the undertaking.

Therefore, a meeting has been set for April 18, at 10:15, in the Art-Art history conference room, 1211 Art-Sociology. I look forward to seeing you there to begin this very exciting project!

Last edit about 1 year ago by shakurra 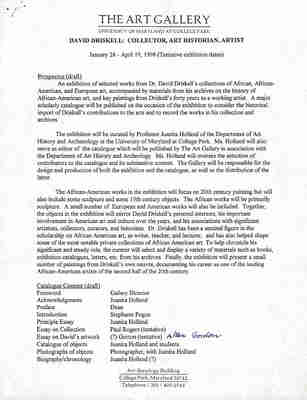 An exhibition of selected works from Dr. David Driskell’s collections of African, AfricanAmerican, and European art, accompanied by materials from his archives on the history of African-American art, and key paintings from Driskell’s forty years as a working artist. A major scholarly catalogue will be published on the occasion of the exhibition to consider the historical import of Driskell’s contributions to the arts and to record the works in his collection and archives.

The exhibition will be curated by Professor Juanita Holland of the Department of Art History and Archaeology at the University of Maryland at College Park. Ms. Holland will also serve as editor of the catalogue which will be published by The Art Gallery in association with the Department of Art History and Archeology. Ms. Holland will oversee the selection of contributors to the catalogue and its substantive content. The Gallery will be responsible for the design and production of both the exhibition and the catalogue, as well as the distribution of the latter.

The African-American works in the exhibition will focus on 20th century painting but will also include some sculpture and some 19th century objects. The African works will be primarily sculpture. A small number of European and American works will also be included. Together, the objects in the exhibition will mirror David Driskell’s personal interests, his important involvement in American art and culture over the years, and his associations with significant artist[ist]s, collectors, curators, and historians. Dr. Driskell has been a seminal figure in the scholarship on African American art, as writer, teacher, and lecturer, and has also helped shape some of the most notable private collections of African American art. To help chronicle his significant and steady role, the curator will select and display a variety of materials such as books, exhibition catalogues, letters, etc. from his archives. Finally, the exhibition will present a small number of paintings from Driskell’s own oeuvre, documenting his career as one of the leading African-American artists of the second half of the 20th century.

Last edit 10 months ago by shakurra 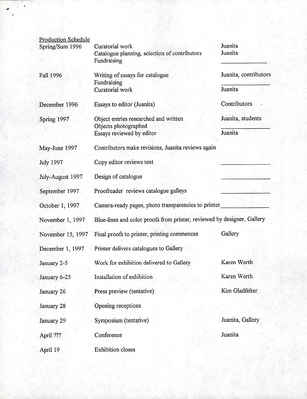 Last edit about 1 year ago by shakurra 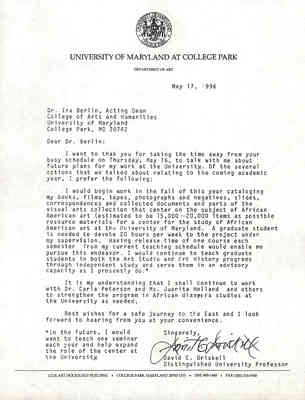 I want to thak [thank] you for taking the time away from your busy schedule on Thursday, May 16, to talk with me about future plans for my work at the University. Of the several options that we talked about relating to the coming academic year, I prefer the following:

I would begin work in the fall of this year cataloging my books, films, tapes, photographs and negatives, slides, correspondences and collected documents and parts of the visual arts collection that center on the subject of African American art (estimated to be 15,000-20,000 items as possible resource materials for a center for the study of African American art at the University of Maryland. A graduate student is needed to devote 20 hours per week to the project under my supervision. Having release time of one course each semester from my current teaching schedule would enable me pursue this endeavor. I would continue to teach graduate students in both the Art Studio and Art History programs through independent study and serve them in an advisory capacity as I presently do.*

It is my understanding that I shall continue to work with Dr. Carla Peterson and Ms. Juanita Holland and others to strengthen the program in African diaspora studies at the University as needed.

Best wishes for a safe journey to the East and I look forward to hearing from you at your convenience.

*In the future, I would Sincerely, want to teach one seminar [SIGNED] each year and help expand David C. Driskell the role of the center at Distinguished University Professor the University

Last edit 10 months ago by shakurra 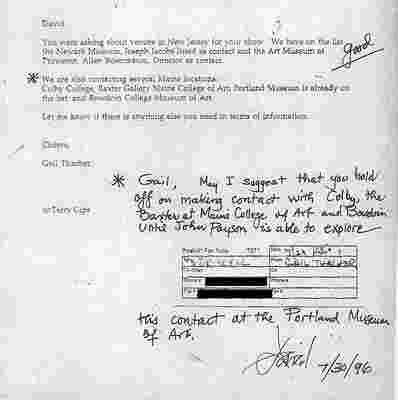 You were asking about venues in New Jersey for your show. We have on the list the Newark Museum, Joseph Jacobs listed as contact and the Art Museum at Princeton, Allen Rosenbaum, Director as contact.

Let me know if there is anything else you need in terms of information.

[HANDWRITTEN COMMENT] *Gail, May I suggest that you hold off on making contact with Colby, the Baxter at Maine College of Art and Bowdoin until John Payson is able to explore this contact at the Portland Museum of Art.

Help us transcribe the papers of artist, educator, and curator David C. Driskell