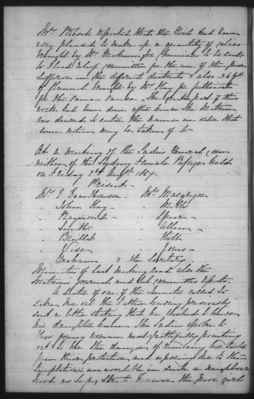 Mrs Roberts reported that the girls had been very pleased to make up a quantity of calico brought by Mrs Graham for chemises. is to be sent to Flood Relief Committee for the use of the poor sufferers in the different districts and also 36 yards of flannel brought by Mrs Hay for petticoats for the same cause. The greater part of this work had been done after hours. The Matron has desired to enter the names in order that some notice may be taken of it.

A sister of one of the Inmates called to take her out. The father having previously sent a letter stating that he wished to have his daughter home. The Ladies spoke to this young woman most faithfully pointing out to her the dangers of removing her sister from their protection and exposing her to the temptations unavoidable in such a neighbour hood as Sussex Street. However the poor girl

Last edit 5 months ago by Karla 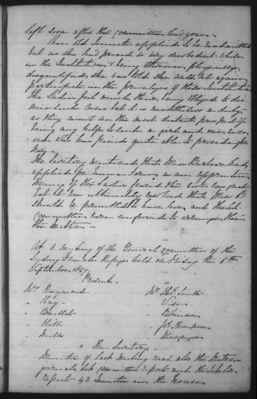 left soon after the Committee had gone.

An old Inmate applied to be readmitted but as she had proved so very disobedient while in the Institution and being otherwise physically disqualified she was told she could not again participate in the privileges of the Institution. The Ladies feel much their being obliged to dis miss such cases but it is nevertheless a duty as they cannot see this much distant prospect of being any help to such a girl and one more over who has friends quite able to provide for her.

The Secretary mentioned that Miss Barbour had applied for Emma Fern as an apprentice. Many of the Ladies feared the girl was great but it was ultimately resolved that Miss B. should be permitted to have her and the Sub Committee were empowered to arrange this [the?] matter.

Last edit 5 months ago by Karla 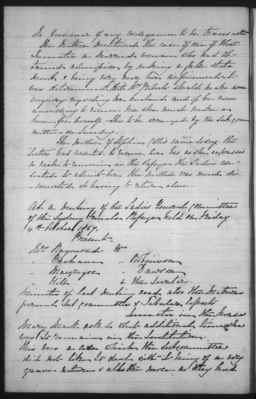 No business of any consequence to be transacted

The Matron mentioned the case of one of the Inmates a married woman who had obtained admission by making a false statement. and being very near her confinement, it was determined that Mrs Roberts should make some enquiry regarding her husband and if he were unwilling to receive her she must make a home for herself this to be arranged by the sub Committee on Tuesday.

The mother if Sophia Collis came to say the "Sisters" had consented to receive her but as she expressed a wish to remaining in the Refuge, the Ladies consented to admit her. The mother was much disconcerted at having to return alone.

At a Meeting of the Ladies General Committee of the Sydney Female Refuge held on Friday 4th October 1867 Present Mrs Raymond Mrs Mrs Graham Mrs Robinson Mrs Macgregor Mrs Dawson Mrs Mills and the Secretary. Minutes of last Meeting read also the Matron's Journal Sub Committee and Tabular Reports. Inmates in the House Mary Mack asked as to what additional time she was to remain in the Institution. This was a case which the Sub Committee did not like to deal with, it being of a very grave nature and also the more as they had 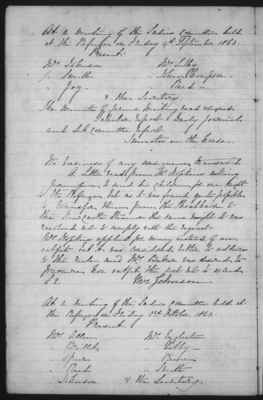 No business of any consequence transacted.

A letter read from Mr Hopkins asking permission to send his children for one night to the Refuge but as it was found quite possible [impossible?] to transfer them from the Shoalhaven to the Newcastle steamer the same night it was resolved not to comply with the request. Mrs Hopkins applied for money instead of an outfit but it was considered better to to adhere to the rule and Mrs Baker was desired to procure her outfit at cost not to exceed £2. Mrs Johnson 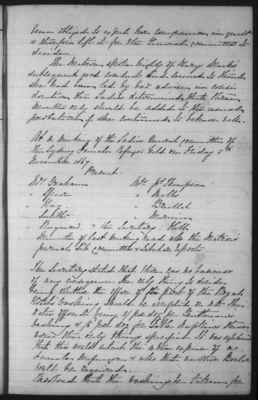 been obliged to express her compassion in general & therefore left it for the General committee to decide.

The Matron spoke highly of Mary Mack's subsequent good conduct and seemed to think she had been led by bad advise in consid deration the Ladies determined that three months only should be added to the usual probation if she continued to behave well.

At a meeting of the Ladies General Committee of the Sydney Female Refuge held on Friday 5th November 1867.

The Secretary stated that there was no business of any consequence the only thing to decide being whether the offer of the (crossed out) part of the Royal Hotel's washing should be accepted or not - the rates offered being 2/ per doz [dozen]for Gentlemen's washing & /6 [pence] per doz [dozen] for table napkins these were the only things specified. It was explained that this would entail the extra expenses of a female messenger & also that another boiler would be required. Resolved that the washing be taken for