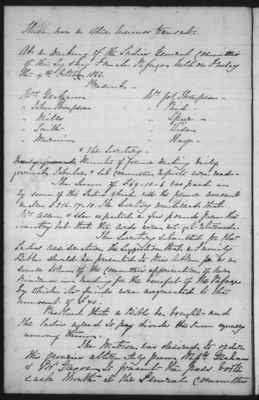 There was no other business transact. At a meeting of the Ladies General Committee of the Sydney Female Refuge held on Friday the 4th if October 1866. Present Mrs Graham Mrs Jos. Thompson Mrs John Thompson Mrs Reid Mrs Mills Mrs Speer Mrs Smith Mrs Widen Mrs Murnin Mrs Hayes and the Secretary. [crossed out] Minutes of former Meeting Daily Journal Tabular and Sub Committees reports were read. The sum of £69.10.6 was paid in by some of the ladies which with the former amounts make £216.17.11. The Secretary mentioned that Mrs Allen and [?] expects a few pounds from the country but that the cards were not [?] returned. The secretary submitted for the Ladies consideration the suggestion that a family Bible should be presented to Miss Aitken [ for crossed out] as so small token of the Committee's appreciation of her kindness in reading for the benefit of the Refuge by which no funds were augmented in the amount of £70. Resolved that a Bible be bought and the Ladies agreed to [pay crossed out] divide the sum equally among them. The Matron was desired to order the groceries alternately from Misses Graham and McGregor. At present they use both. Last month at the General Committee 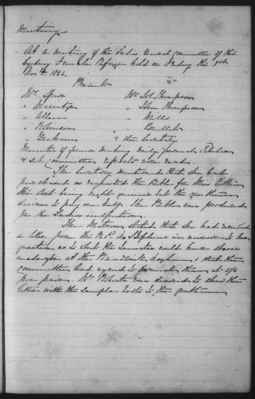 Meeting At a Meeting of the Ladies General Committee of the Sydney Female Refuge held on Fruday the 2nd Nov.1866. Present Mrs Spears Mrs Jos. Thompson Mrs Macintyre Mrs John Thompson Mrs Allen Mrs Mills Mrs Robinson Mrs Breillat Mrs Graham and the Secretary Minutes ofprevious meeting Daily journals Tabular and Sub Committee reports were read. The Secretary mentioned that she had purchased as requested the Bible for Miss Aitkins the cost being eight guineas but the [indecipherable] [indecipherable] desires to pay one half. The Bible was purchased for the Ladies Institution. The Matron stated that she had received a letter from the Right Hon. Stephens in answer to her question as to whether the Inmates could have shoes made for at the Randwick Asylum and that the Committee had agreed to purchase them at 5/6 per pair. Mrs [indecipherable] was desirous to show the letter with the sample shoes to the gentleman. 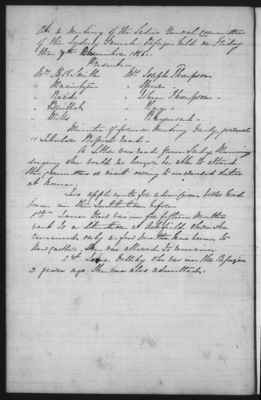 At a Meeting of the Ladies General Committee of the Sydney Female Refuge held on Friday the 7th December 1866. Present Mrs Smith Mrs Joseph Thompson Mrs Macintyre Mrs Speer Mrs Reid Mrs John Thompson Mrs Breillat Mrs Hay Mrs Miller Mrs Raymond Minutes of former Meeting Daily journals and Tabular Report read. A letter was read from Lady Manning saying she would no longer be able to attend the Committees or visit owing to increased duties at home. Two applicants for admission, both had been in the Institution before. 1st Jane Blood[?] was in for fifteen months went to a situation at Ashfield where she remained only a few months. Has been to Newcastle. She was allowed to remain. 2nd Jane Bellahy[?] who was in the Refuge 3 years ago. She was also admitted. 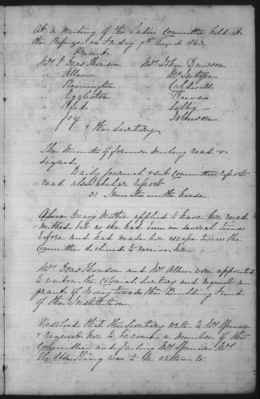 At a Meeting of the Ladies Committee held at the Refuge on Friday 7th August 1863. Present Mrs E Deas Thomson Mrs John Dawson Mrs Allen Mrs Macintyre Mrs Bennington Mrs Caldwell Mrs Eggleston Mrs Reeve Mrs Reed Mrs Selby Mrs Joy Mrs Johnson and the Secretary. The minutes of former Meeting read and signed. Daily Journal and sub Committee reports read also Tabular report. 31 inmates in the house. Alice Gray's Mother applied to have her readmitted but as she had been in several times before and had made her escape twice the Committee declined to receive her. Mrs Deas Thompson and Mrs Allen were appointed to wait on the Colonial Secretary and request a grant of money towards the Building Fund of the Institution. Resolved that the Secretary write to Mrs Spencer and request her to become a member of this Committee and failing Mrs Spencer Mrs Hilton King was to be written to. 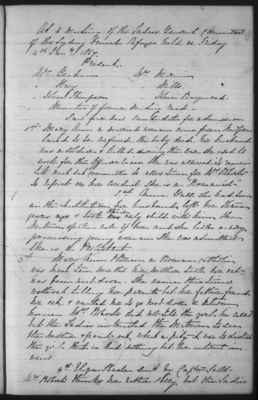 At a meeting of the Ladies General Committee of the Sydney Female Refuge held on Friday 4th January 1867. Present Mrs Graham Mrs Murnin Mrs Hay Mrs Mills Mrs John Thompson Mrs John Raymond Minutes of former Meeting read_ Saw four new candidates for admission 1st Mary Ann[?] a married woman came from New Zealand to be confined, the baby died, her husband was a soldier and killed during the war she used to work for the Officer's wives. She was allowed to remain till next sub Committee to allow time for Mrs Roberts to report on her condition. She is a "Romanish". 2nd Anne Gall who had been in the Institution her husband left her three years ago and took [her crossed out]their only child with him. The Matron spoke well of her and she looks a very promising young woman. She was admitted. She is a Protestant. 3rd Mary Ann O'Brien, a Roman Catholic was with her mother, her mother took her out, has been next door. She came this time without telling her parents but her father found her out, and wanted her to go next door or return home. Mrs Roberts did not tell the girl he called but the Ladies instructed the Matron to see the Mother and point out what a pity it was to disturb the girl that we had nothing but her interest in view. 4th Eliza Slade sent by Captain Scott. Mrs Roberts thinks her rather silly but the Ladies