ReadAboutContentsHelp
In 1826, the privates Joseph Sudds and Patrick Thompson deliberately committed theft in the expectation that they would be transported, a fate they believed to be preferable to continued service in the army. Lieutenant Governor Ralph Darling, Governor of N.S.W., commuted their sentence to a flogging and assignment of seven years hard labour in the chain gang. This collection includes reports, notes and correspondence with and from Francis Forbes, the first Chief Justice of the Supreme Court of NSW, that relate to the Sudds and Thompson cases, the transmission of charges by Captain Robison against Governor Ralph Darling, and Robison's trial and court martial. 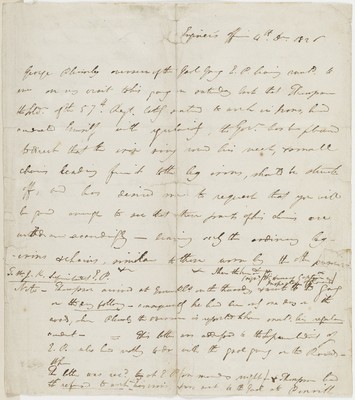 George Plumly overseer of the Gaol Gang E.P. having said to me on my visit to his gang on saturday last that Thompson the Soldr. of the 57th Regt. lately sentenced to work in irons, had conducted himself with regularity, the Gov. has been pleased to direct that the iron ring round his neck, & small chains leading from it to the leg irons, shall be struck off, and has desired me to request that you will be good enough to see that these parts of his chains are withdrawn accordingly – leaving only the ordinary leg irons & chains, similar to those worn by the other prisoners I have the honour &c (signd.) W. Dumaresq Captain & Inspector of Convicts To H.J.K. Superintendent E.P.

Note – Thompson arrived at Emu Pls. on the thursday, & went to the gang on the day following - consequently he had been only one day on the road, when Plumly the overseer is reported to have matd. his regular conduct - This letter addressed to the Superintendent of E.P. who had nothing to do with the gaol gang on the Roads – When The letter was recd. at E.P. (on monday night) & Thompson had refused to work in heavy irons, & was sent to the Gaol at Penrith

Last edit over 1 year ago by Sarah Morley 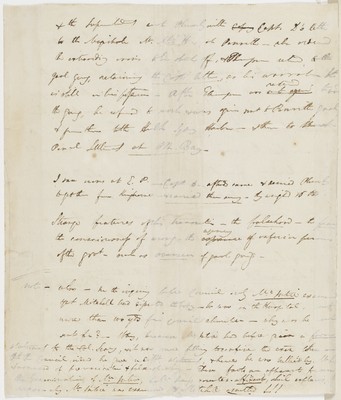 & the Superintendent with Plumly with Capt. D's letter to the hospital to Mr [indecipherable] at Penrith - who ordered the extending irons to be struck off, and Thompson returned to the gaol gang, retaining the Capt's letter as his warrant. It is still in his possession. After Thompson was returned [original text crossed out] to the gang, he refused to work and was again sent to Penrith goal & from there to the Hulk Sydy [Sydney] Harbour - & there to settlement. Penal Settlement at Mn [Morton] Bay.

Strange features of this transactions - the falsehood - the fear the consciousness of wrong - the agency of inferior persons of the govt. - such as overseer of goal gang -

Note - also in the inquiry before council only [indecipherable] examined yet Mitchell had inspected the body -he was in the Hospital, was more than 100 yds from Council Chamber - why was he then sent for? Why, because [indecipherable] had before given a forward statement to the Col. Scary, [Secretary] & it was more fitting to [indecipherable] the exam to him. At the council, indeed he gave a difft [different] statement & hence he was bullied by [indecipherable] & accused of fornication and false speaking - These facts are apparent from the exmaimation of [indecipherable] and the gang's counter- affidavit, while explaining the reason why [indecipherable] was examined, and Mitchell acquitted !!!

Last edit 7 months ago by Valerie 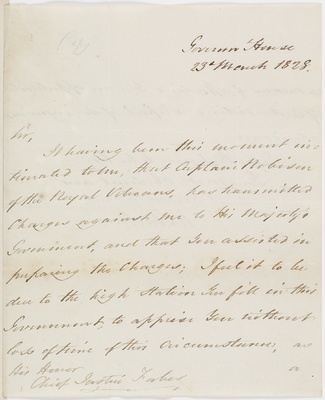 Sir, If having been this moment intimated to me, that Captain Robison of the Royal Veterans has transmitted charges against me to His Majesty’s Government, and that you assisted in preparing the Charges; I feel it to be due to the high station you fill in this Government, to appraise you without loss of time of their circumstance, as a 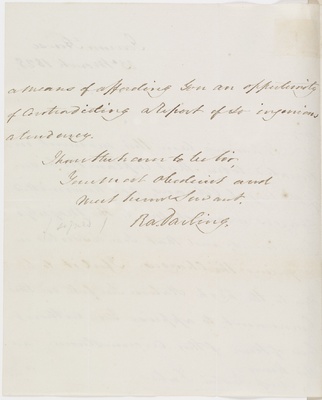 a means of affording you an opportunity of contradicting a report of so injurious a tendency.

I have the honor to be Sir, Your most obedient and most humble Servant 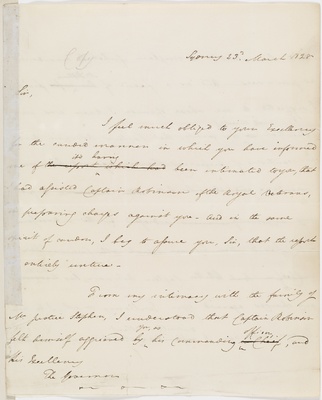 I feel much obliged to your Excellency for the candid manner in which you have informed me of the report which had it’s having been intimated to you, that I had assisted Captain Robinson of the Royal Veterans, in preparing charges against you – and in the same spirit of candour, I beg to assure you, Sir, that the report is entirely untrue.

From my intimacy with the family of Mr Justice Stephen, I understood that Captain Robinson felt himself aggrieved by you as his commanding in Chief officer, and His Excellency