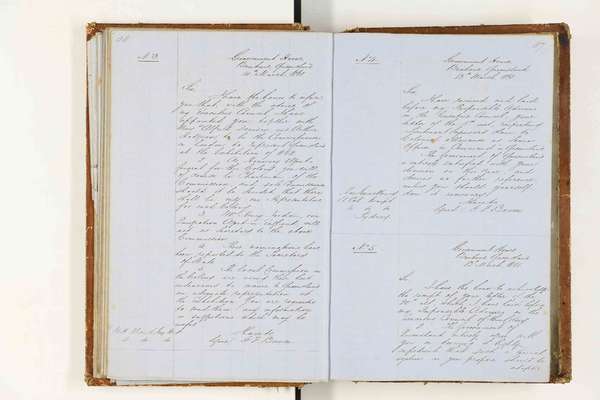 Sir, I have the honor to inform you that, with the advise of my Executive Council, I have appointed you, together with Messrs Alfred Denison, and Arthur Hodgson, to be the [Comminsioners] in London to represent Queensland at the Exhibition of 1862. 2. As Honoray Agent - General for this Colony, you will, of course be Chairman of the Commission, and sole Commissioner, should it be decided that there shall be only one Representative for each Colony. 3. Mr Henry Jordan, our Emigration Agent in England, will act as Secretary to the above Commission. 4. These nominations have been reported to the Secretary of State. 5. The local [Commision] in the Colony are using their best endeavours to secure to Queensland an adequate representation at the Exhibition. You are requested to send them any information or suggestions which may be useful. I have to. Signed / G.F. Bowen.

His Excellency Lt. Col. Kempt. to. to. to. Sydney.

Sir, I have received and laid before my Responsible Advisers in the Executive Council, your letter of the 5th inst., respecting Lieutenant Seymour's claim to Colonial allowance as "Senior Officer in Command" in Queensland. The Government of Queensland is entirely satiffied with your decision on this case, and desires no further reference, unless you should yourself deem it necessary. I have to. Signed / G. F. Bowen

Sir, I have the honor to acknowledge the receipt of your letter of the 20th ult, which I have laid before my Responsible Advisers in the Executive Council of this Colony. 2. The Government of Queensland entirely agree with you in deeming it highly expedient that such a general system as you propose should be adopted

Last edit about 1 month ago by Bullswool
Displaying 1 page