Francis Bigge was appointed a Member of the first Queensland Legislative Council on 1 May 1860. Initially it was a five-year appointment, but later it was extended to be a life appointment. He resigned on 16 May 1873.

During this time, Bigge's Camp became the terminus of Queensland's first railway line. The Queensland Governor George Bowen decided that Bigge's Camp was too mundane a name and, being a student of the classics, proposed it be renamed Grandchester, Grand being big and chester being camp in Latin. 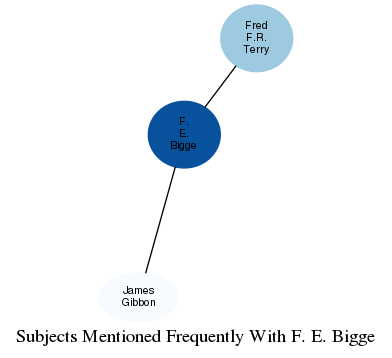 The graph displays the other subjects mentioned on the same pages as the subject "F. E. Bigge". If the same subject occurs on a page with "F. E. Bigge" more than once, it appears closer to "F. E. Bigge" on the graph, and is colored in a darker shade. The closer a subject is to the center, the more "related" the subjects are.

Show pages that mention F. E. Bigge in all works