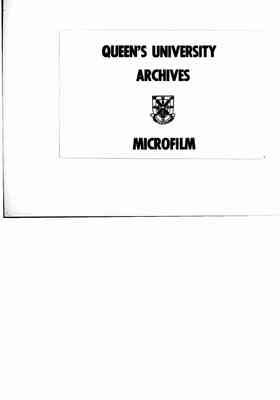 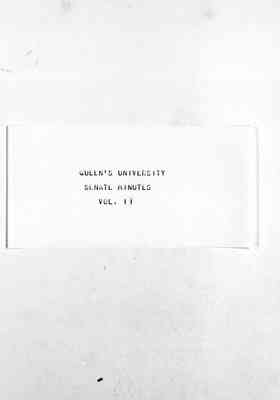 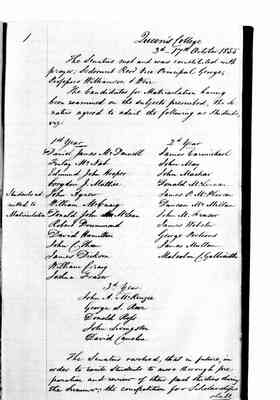 The Candidates for Matriculation having been examined on the subjects prescribed, the Senatus agreed to admit the following as students, viz: [margin] Students admitted to Matriculation

The Senatus revolved, that in future, in order to excite students to more thorough preparation and review of their past studies during the Summer, the competition for scholarships shall 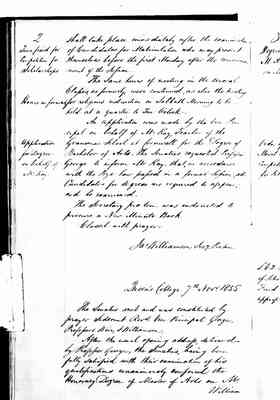 shall take place immediately after the examination of Candidates for Matriculation who may present themselves before the first Monday after the commencement of the Session.

The same hours of meeting in the several Classes, as formerly, were continued, as also the meeting for religious instruction on Sabbath Morning to be held at a quarter to Ten O'clock.

[margin] Application for Degree on behalf of Mr. Kay. [/margin]

An Application was made by the Vice Principal on behalf of Mr. Kay, Teacher of the Grammar School at Cornwall for the Degree of Bachelor of Arts. The Senatus requested Professor George to inform Mr. Kay, that, in accordance with the Bye law passed in a former Session, all Candidates for degrees are required to appear, and be examined.

The Secretary pro tem. was instructed to procure a New Minute Book

After the usual opening address, delivered by Professor George, the Senatus, having been fully satisfied with their examination of his qualifications unanimously conferred the Honorary Degree of Master of Arts on Mr. William

Last edit 3 months ago by Khufu 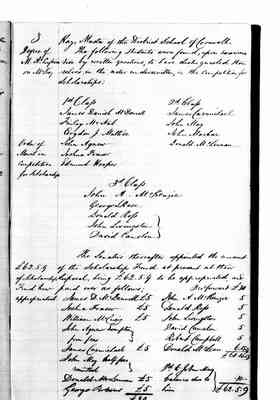 Kay, Master of the District School of Cornwall. The following students where found upon examination by written questions, to have distinguished themselves in the order underwritten, in the Competion for Scholarships:

[Margin] Order of Merit in Competition for scholarships [/margin]

The Senatus thereafter appointed the amount of the Scholarship Fund at present at their disposal, being £62.5.9 to be appropriated, and paid over as follows;