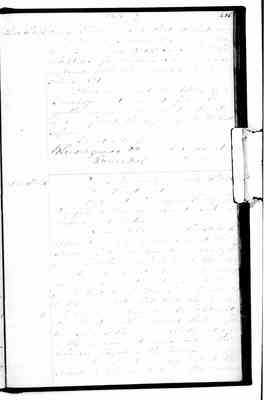 [Lu]cian's Charges and that at that examination in subsequent sessions a Xenophon's Anabasis B. I. ch. vii-x still be substituted for Lucians Charges in accordance with the amended High School Act.

There were read the letters of acknowledgement received from the gentlemen upon wherein the Senate had conferred the degree of D.D. last session.

A deputation from the students appeared and were heard [?] the extension of the holidays till January 9th which had been applied for by them and refused by the Senate at the last meeting. After full consideration, the Senate resolved that the holidays shall be extended to the above date but that they shall not begin till Saturday the 23rd inst. The Senate further resolved that in future sessions they shall strictly adhere to the arrangement announced in the Calendar respecting the holidays. 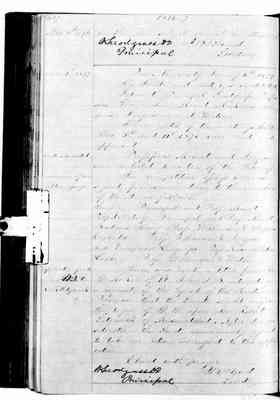 on the above subject cannot be attended to.

The minutes of the meetings held Dec. 5th and 11th 1876 were read and approved.

Professors Mowat and Ferguson were re-elected Curators of the Library.

The competitive essays were assigned for examinaiton to the members of Senate as follows:

[margin] application for the degree of D.D. to Rev. R.G. Sedgewich [/margin]

There was read a letter from Rev. D. McRae of St. John, N.B. intimating a request of the Synod of the Maritime Provinces that the Senate should confer the degree of D.D. upon Rev. Robert Sedgewich of Musquedoboit. After due consideration the Senate unanimously agreed to take no action in regard to this application. 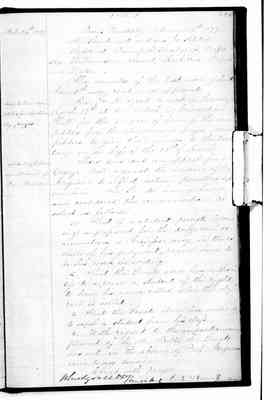 The minutes of the last meeting held Jan. 5th were read and approved.

There was read an appeal from George Bell against the decision of Prof. Ferguson to inflict certain penalties upon him. The Senate having heard and considered the communication resolved as follows:

(1) That if a student persists in coming unprepared for their daily oral examinations a Professor may in the exercise of his judgement, require him to do his work in writing.

2. That the Senate alone has authority to deprive a student of the right to have his name called when the class roll is called.

3. That the Senate alone has authority to expel a student from his class.

4. With regard to the imposition complained of by Mr Bells, the Senate does not, in the absence of Prof. Ferguson come to any decision. 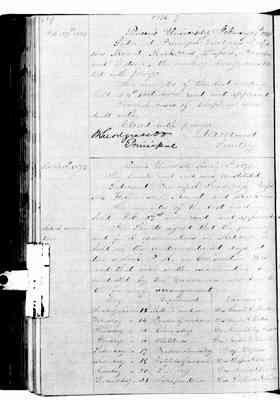 The minutes of the last meeting held 24th inst. were read and approved.

Several cases of discipline were dealt with.

The minutes of the last meeting held Feb. 27th were read and approved.

The Senate agreed that the primary and final examinations in Medicine be held on the undermentioned days at two o'clock P.M. in Convocation Hall, and that each written examination be conducted by the Examiners recording to the following arrangement. 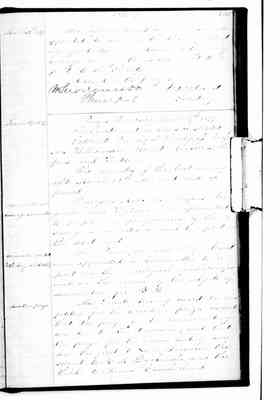 The aforementioned six [?] were also appointed to examine the theology intending graduates in medicine as they may arrange among themselves, and to report to the Senate.

The minutes of the last meeting held March 17th were read and approved.

Professors Mackerras, Dupuis, Ferguson and Watson were appointed to prepare a programme of the ensuing examinations, and to report on the 31st inst.

The Principal and Professors were appointed a Committee to report on the Theological scholarships and on the revision of the subjects of examinations for B.T. 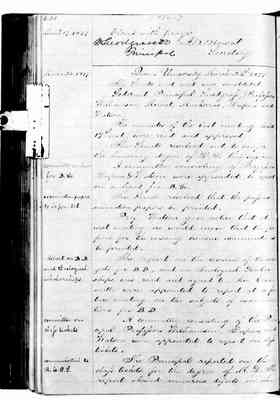 The minutes of the last meeting held 17th inst. were read and approved.

The Senate resolved not to confer the honorary degree of D.D. this session.

A committee consisting of Professors Dupuis & Watson were appointed to report on a hood for B.Sc.

The Senate resolved that the pass examination papers be printed.

Prof. Watson gave notice that at next meeting he would move that the papers for the ensuing honour examinations be printed.

The report on the revision of the subjects for B.D., and on theological Scholarships was read and agreed to. The Committee were appointed to report at a future meeting on the subjects of examinations for B.D.

A committee consisting of the Princiapl, Professors Williamson, Dupuis, and Watson were appointed to report on class tickets.

The Principal lreported on the class tickets for the degree of M.D. The report showed numerous defects in them 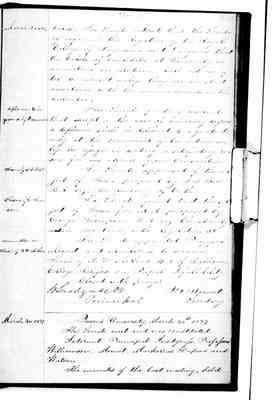 tickets. The Senate ordered that the Secretary informed the Registrar of the Royal College of Physicians and Surgeons that the tickets of candidates at University examinations in Medicine will not hereafter be received unless they are in strict accordance with the announcements in the Calendar.

[margin] diplomas to be given only at convocation [/margin]

The Senate further resolved that except in the case of honorary degrees, a diploma shall be delivered to graduates only at the ceremonial of laureation unless he assign in writing a satisfactory reason for his absence from Convocation.

The Senate approved of the subject of Thesis proposed by J.J. Bell B.A. viz. The discovery of truth

The Senate found that the subject of Thesis for M.A. proposed by George Thompson B.A. viz Christianity is not in accordance with Regulation 58.

The Senate appointed Professors Mowat and Mackerras to examine a Thesis of A.W. McLeod B.A. of Dalhousie College Halifax on Papal Infallibility.

The minutes of the last meeting, held 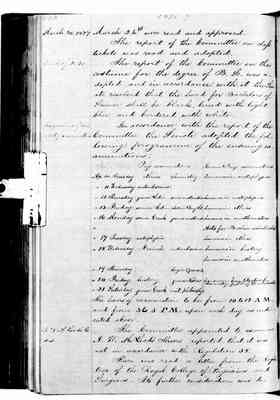 March 24th were read and approved.

The report of the Committee on class tickets was read and adopted.

The report of the Committee on the costume for the degree of B.Sc. was adopted and in accordance with it the Senate resolved tha the hood for Bachelor of Science shall be black, lined with light blue and bordered with white.

In accordance with the report of the Committee the Senate adopted the following programme of the ensuing examinations:

The Committee appointed to examine A.W. McLeod's Thesis reported that it was not in accordance with Regulation 58.

There was read a letter from the Registrar of the Royal College of Physicians and Surgeons. Its further consideration was de 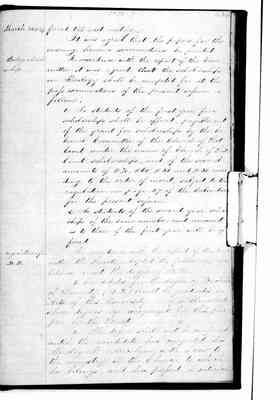 It was agreed that the papers for the ensuing honour examinations be printed.

2. To students of the second year scholarship of the same number and amount as to those of the first year will be offered.

In accordance with the report of the Committee the Senate adopted the following regulations anent the degree of B.Divinity.

1. Candidates for the degree of Bachelor of Divinity (B.D.) must be graduates in Arts of this University or of a University whose degrees are recognized for this purpose by the Senate.

2. The degree shall not be conferred until the candidate has completed his Theological curriculum with a view to the ministry in the Church to which he belongs, and has passed a satisfac[tory] 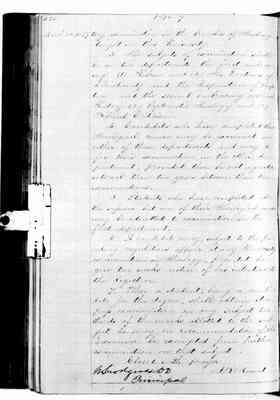 tory examination in the branches of theology taught in this University.

3. The subjects of examination shall be in two departments, the first embracing (1) Hebrew and (2) the Evidences of Christianity and the Inspiration of Scripture, and the second embracing (1) Church History (2) Systematic Theology and (3) Biblical Criticism.

4. Candidates who have completed their Theological course may be examined in either of these departments, and may defer their examination in the other department, provided there be not a greater interval than two years between their two examinations.

5. Students who have completed all the sessions but one of their Theological courses may be admitted to examination in the first department.

6. A candidate may subject to the preceding regulations appear at any University examination in Theology, provided he give two weeks' notice of his intention to the Registrar.

7. When a student, being a candidate for the degree, shall obtain at a pass examintion on any subject two thirds of the marks allotted to the subject he may on recommendation of the Examiner be exempted from further examination on that subject.