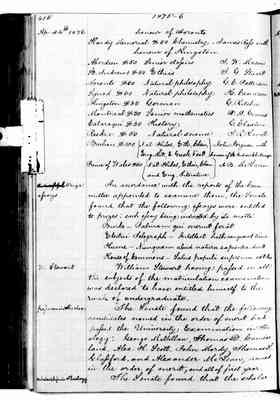 In accordance with the reports of the Committee appointed to examine them, the Senate found that the following essays were entitled to prizes: each essay being indicated by its motto: Burke - Palmam qui meriut ferat Electric Telegraph - Intellect hath conquered time Hume - Nunquam abid natura sapentia dicit House of Commons - Salus populi suprema est [?]

William Stewart having passed in all the subjects of the matriculation examination was declared to have entitled himself to the rank of undergraduate.

The Senate found that the scholar[ships] 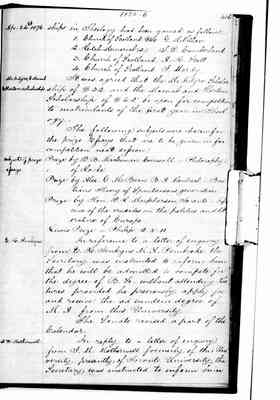 [scholar]ships had been gained as follows:

The following subject were chosen for competition next session:

Prize by D.B. Maclennan Cornwall - Philosophy of Locke Prize by Alex. G. McBean B.A. Montreal - Bastians Theory of Spontaneous generation Prize by Hon. D.L. Macpherson, Toronto - [In?} of the crusades on the politics and literature of Europe Lewis Prize - Philip 2.5-11

In reference to a letter of enquiry from E.H. Jenkyns M.A. Pembroke the Secretary was instructed to inform him that he will be admitted to compete for the degree of B.Sc. without attending Lectures provided he previously apply for and receive the ad eundem degree of M.A. from this University.

The Senate revised a part of the Calendar.

In reply to a letter of enquiry from J.M. Motherwell formerly of this University, presently of Toronto University, the Secretary was instructed to inform him 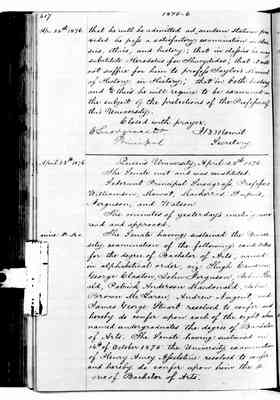 that he will be admitted ad eundem statum provided he pass a satisfactory examination in classics, ethics, and history; that in classics he may substitute Herodotus for Thucydides; that it will not suffice for him to profess Taylors Manual of History in History; that in both history and Ethics he will require to be examined in the subject of the prelections of the Professors of this University. 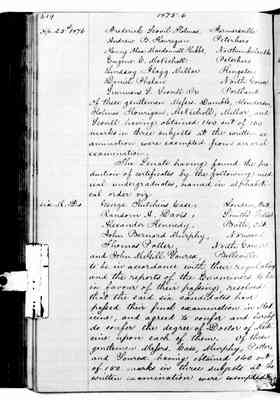 Of these gentlemen Mssrs. Dumble, Henderson, Holmes, Hourigan, McNicholl, Millar and Scovill having obtained 140 out of 150 marks in three subjects at the written examination were exempted from an oral examination.

The Senate having found the production of certificates by the following medical undergraduates, named in alphabetical order viz.

to be in accodance with their regulations, and the reports of the Examiners to be in favour of their passing, resolved that the said six candidates have passed their final examination in Medicine and agreed to confer and hereby do confer the degree of of Doctor of Medicine upon each of them. Of these gentlemen Messrs. Case, Murphy, Potter, and Yourex having obtained 140 out of 150 marks in three subjects at the written examination were exempted. 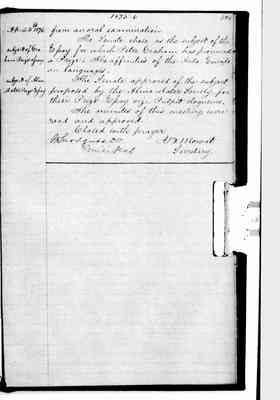 from an oral examination.

The Senate chose as the subject of the Essay for which Peter Graham has promised a Prize: The affinities of the Indo-Europe an languages.

The Senate approved of the subject proposed by the Alma Mater Society for their Prize Essay viz. Pulpit eloquence.

The minutes of this meeting were read and approved. 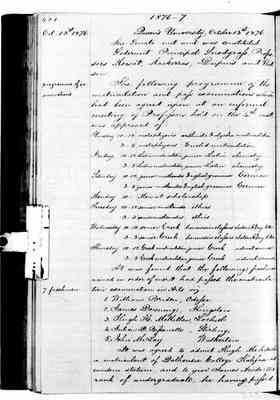 The Senate met and was contituted.

The following programme of the matriculation and pass examinations which had been agreed upon at an informal meeting of Professors held on the 4th inst. was approved of:

It was found that the following freshmen named in order of merit had passed the matriculation examination in Arts viz.

It was agreed to admit Hugh McIntosh a matriculant of Dalhousie College, Halifax ad eundem statum, and to give James Awde the rank of undergraduate, he having passed 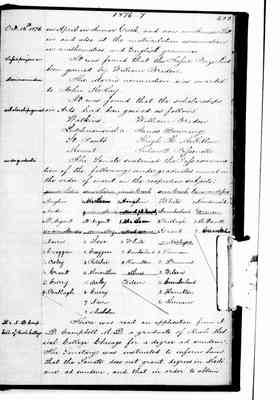 in April in Junior Greek, and now in Junior Latin and also at the matriculation examination in mathematics and English grammar.

It was found that the Tassie Prize had been gained by William Briden.

The Morris nomination was awarded to John McLay.

It was found that the scholarships in Arts had been gained as follows:

The Senate sustained the Pass examination of the following undergraduates named in the order of merit in the respective subjects:

There was read an appllication from N.D. Campbell M.D. a graduate of Rush Medical College Chicago for a degree ad eundem. The Secretary was instructed to inform him that the Senate does not grant degrees in Medicine ad eundem, and that in order to obtain

a degree in Medicine from this University medical graduates from other Colleges require to attend for one session the Royal College of Physicians and Surgeons Kingston and to pass the regular examination.

In reference to an application from Miss de St Rémy, the Senate sanctioned the admission into the classes of chemistry, and Logic of such young ladies as she might send under suitable superintendence - the fees to be $7 for the Chemistry class and $3 for the Logic class.

There was read an application from Rev. C.A. Tanner for the degree of B.A. The Senate resolved to adhere to its minute of Jan. 12th 1866 in regard to a similar application from Mr. Tanner, but in consideration of his not having heard the Lectures on Mental and Moral Philosophy, prescribed in these subjects Murray's Outline of Hamilton's Philosophy and Stewarts' Moral Philosophy.

The minutes of the last meeting, held on the 13th were read and approved.

In reference to an application from G.C. Patterson the Senate resolved that in order to graduate his further attendance in the Latin and Greek classes will be 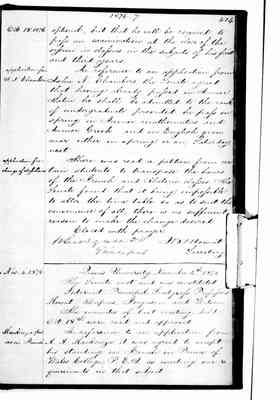 optional, but that he will be required to pass an examination at the close of the session in classics in the subjects of his first and third years.

In reference to an application from John N. Chambers the Senate agreed that having already passed in Junior Latin he shall be admitted to the rank of undergraduate provided he pass in spring in Junior mathematics and Junior Greek, and in English grammar either in spring or on Saturday, next.

There was read a petition from certain students to transpose the hours of the French and Rhetoric classes. The Senate found tht it being impossible to alter the time table so as to suit the convenience of all, there is no sufficient reason to make the change desired.

The minutes of last meeting held Oct 18th were read and approved.

In reference to an application from A.A. Mackenzie it was agreed to accept his standing in French in Prince of Wales College P.E.I. as meeting our requirements in that subject. 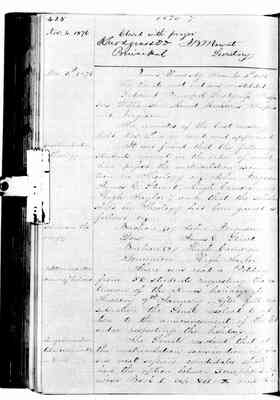 The minutes of the last meeting held Nov. 4th were read and approved.

It was found that the following students named in the order of merit had passed the matriculation examination in Theology viz. John Ferguson, James G. Stuart, Hugh Cameron and Hugh Taylor; and that the scholarships in Theology had been gained as follows, viz.

[margin] scholars in the clergy [/margin]

There was read a Petition from 56 students requesting the extension of the Xmas holidays to Tuesday 9th January. After full consideration the Senate resolved to adhere to the announcement of the Calendar respecting the holidays.

The Senate resolved that at the matriculation examination in classics next session candidates shall have the option between Xenophon's Anabasis Book I cap. vii-x and