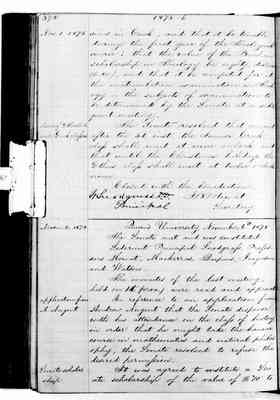 [Ephi]sians in Greek, and that it be tenable during the first year of the Theological course: that the value of the Buchan scholarship in Theology be eighty dollars ($80), and that it be competed for at the matriculation examination in Theology - the subject of examination to be determined by the Senate at a subsequent meeting.

Closed with the benediction

The minutes of the last meeting, held on 1st prox/ were read and approved.

[margin] matriculation from A. Nugent [/margin]

In reference to an application from Andrew Nugent that the SEnate dispense with his attendance on the class of history in order that he might take the honour course in mathematics and natural philosophy, the Senate resolved to refuse the desired permission. 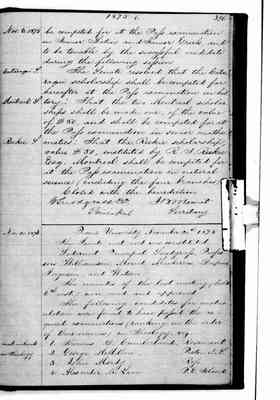 be competed for at the Pass examintaion in Junior Latin and Junior Greek, and to be tenable by the successful candidate during the following session.

Closed with the benediction. 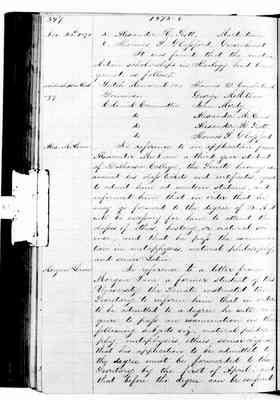 It was found that the matriculation scholarships in Theology had been gained as follows:

In reference to an applicaiton from Alexander McLean a third year student of Dalhouse College, the Senate having examined his class tickets and certificates, agreed to admit him ad eundem statum, and informed him that in order that he may go forward to the degree of B.A. it will be necessary for him to attend the classes of ethics, history, or natural science, and that he pass the examination in metaphysics, natural philosophy, and senior Latin.

In reference to a letter from Morgan Lane a former student of this University the Senate instructed the Secretary in inform him that in order to be admitted to a degree he will require to pass an examination in the following subjects viz. natural philosophy, metaphysics, ethics, senior classics, that his application to be admitted to the degree must be forwarded to the Secretary by the first of April: and that before th edegree can be conferred 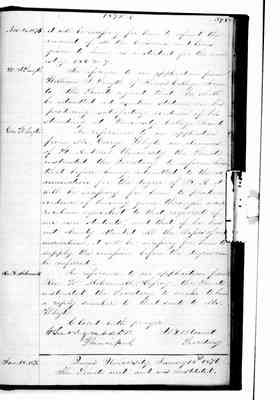 it will be necessary for him to refund the amount of all the bursaries and loans given to him as a student for the unversity 1863-7.

In reference to an application from William S. Smyth of Knox's College Toronto, the Senate agreed that he shall be admitted ad eundem statum on his producing satisfactory evidence of his standing at University College Toronto.

In reference to an applicaiton from Mr. George Whyte an alumnus of St. Andrew's University the Senate instructed the Secretary to inform him that before being admitted to the examination for the degree of B.A. it will be necessary for him to produce evidence of having gone through a curriculum equivalent to that required of our own students; and that if he had not already attended all the classes of our curriculum, it will be necessary for him to supply the ommision before the degree can be conferred.

In reference to an application from Rev. W. McConnell, Lefray, the Senate instructed the Secretary to make to him a reply similar to that sent to Mr. Whyte. 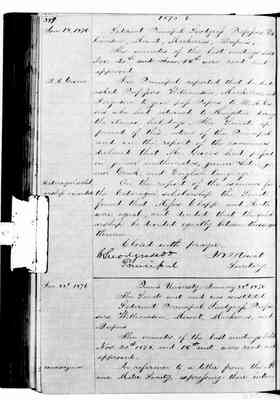 The minutes of the last meetings held Nov. 20th and Jan. 18th were read and approved.

The Principal reported that he had asked Professors Williamson, Mackerras, and Ferguson to give pass Papers to D.A. Givens who had returned to Kingston during the Xmas holidays. The Senate approved of this action of the Principal and on the report of the examiners declared that Mr. Givens had passed in junior mathemiatics, junior Latin, junior Greek, and English language.

On the report of the examiner for the Cataraqui scholarship the Senate found that Messrs. Clapp and Heath were equal, and decided that the scholarship be divided equally between these gentlemen.

In reference to a letter from the Alma Mater Society, expressing their inten[tion] 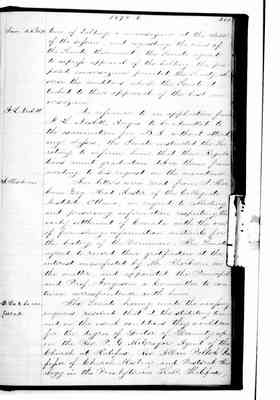 In reference to an application F.L. Nesbitt, Angus to be admitted to the examination for B.A. without attending classes, the Senate instructed the Secretary to inform him that their Regulations anent graduation debar them from acceding to his request in the meantime.

Two letters were read from J. Thorburn Esq. Head Master of the Collegiate Institute Ottawa, in regard to collecting and preserving information respecting the early settlement of Canada with the view of furnishing information material for the history of the Dominion. The Senate agreed to record their gratification at the interest manifested by Mr. Thorburn in the matter, and appointed the Principal and Prof. Ferguson a Committee to continue correspondence with him.

[margin] D.D.s to be conferred [/margin]

The Senate having made the necessary eqnuiries resolved that at the statutory time and on the usual conditions they would confer the degree of Doctor of Divinity upon the Rev. P.G. McGregor, Agent of the Church at Halifax, Rev. Allan Pollok, Professor of Church History, and Pastoral Theology in the Presbyterian Hall, Halifax, 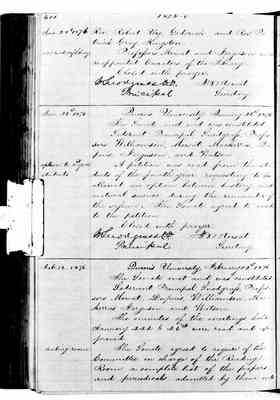 Professors Mowat and Ferguson were reappointed Curators of the Library.

The Senate met and constituted.

A petition was read from the students of the fourth year requesting to be allowed an option between history, and natural science during the remainder of the session. The Senate agreed to accede to the petition.

The Senate met and constituted.

The minutes of the meetings held January 22d & 26th were read and approved. 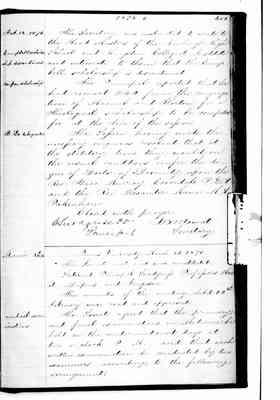 The Secretary was instructed to write to the Head Masters of the Newburgh High School and Kingston Collegiate Institute and intimate to them that the Campbell scholarship is discontinued.

The Principal reported that he had received $42 from the congregation of Macnab and Horton for a Theological scholarship to be competed for at the close of the session.

The session having made the necessary enquiries resolved that at the statutory time they would on the usual conditions confer the degree of Doctor of Divinity, upon the Rev. Isaac Murray, Coverdale, P.E.I. and the Rev. Alexander Mann M.A. Pakenham

The minutes of the meeting held 12th February were read and approved.

The Senate agreed that the primary and final examinations in Medicine be held in the undermentioned days at two o'clock P.M., and that each written examination be conducted by two examiners according to the following arrangement: 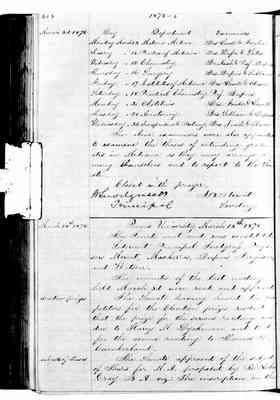 The above examiners were also appointed to examine the theses of intending graduates in Medicine as they may arrange among themselves and to report to the Senate.

The minutes of the lsat meeting held March 3d were read and approved.

The Senate having heard the competitors for the Elocution prizes resolved that the prize for the serious reading was due to Harry M. Dyckman and that for the comic reading to Thomas L. Cumberland.

The Senate approved of the subject of Thesis for M.A. proposed by Rev. John Gray B.A. viz.: The inscription on the 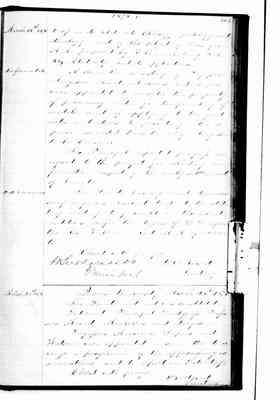 Cross in relations to bibliography, philosophy, and ethnology: and of the subject of Thesis for M.A. proposed by William A. Lang B.A. viz. Electricity and its applicaitons.

A committee consisting of Professors Ferguson, Mowat, Mackerras, and Dupuis were appointed to consider the propriety of procuring a die for teh founding of medals, and of applying to the graduates and others to provide for the expense connected therewith. Prof. Ferguson to be Convenor.

The Principal reported progress in regard to the project for collecting information respecting the early settlement of Canada.

The Senate having made the necessary inquiries resolved that at the statutory meeting they would on the usual conditions confer the degree of D.D. upon the Rev. William Reid M.A. of Toronto.

Professors Mackerras, Dupuis, and Watson were appointed a committee to arrange a programme of the approaching examinations, and to report on Saturday