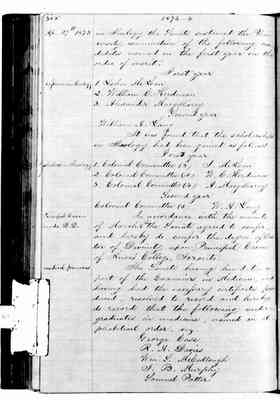 in Theology the Senate sustained the University examination of the following candidates named in the first year in the order of merit:

In accordance with the minute of March 6th the Senate agreed to confer and hereby do confer the degree of Doctor of Divinity upon Princpal Caven of Knox's College, Toronto.

The Senate having heard the report of the Examiner in Medicine, and having had the necesssary certificates produced, resolved to record and hereby do record that the following undergraduates in medicine, named in alphabetical order, viz. 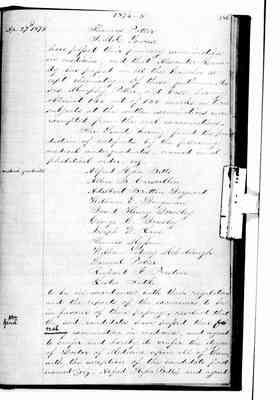 have passed their primary examination in medicine, and that Alexander Kennedy has passed in all the branches except chemistry. Of these gentlemen Messrs. Murphy, Potter, and Case having obtained 140 out of 150 marks in three subjects at the written examinations were exempted from the oral examinations.

The Senate having found the production of certificates by the following medical undergraduates, named in alphabetical order, viz.

to be in accordance with their regulation and the reports of the examiners to be in favour of their passing, resolved that the said candidates have passed their final examination in medicine, and agreed to confer and hereby do confer the degree of Doctor of Medicine upon all of them, with the exception of the candidate first named, [viz. Alfred Hyla Betts] and agreed 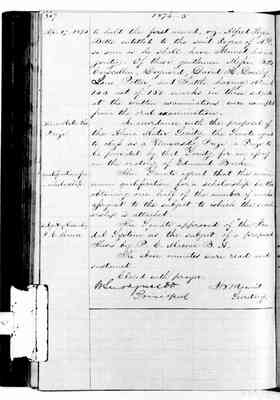 to hold the first named, viz. Alfred Hyla Betts entitled to the said degree of M.D. so soon as he shall have attained his majority. Of these gentlemen Messrs Betts, Barscallen, Deynard, David H. Dowsley, Lane, Potter and Tuttle having obtained 140 out of 150 marks in three subjects at the written examinations were exempted from the oral examination.

In accordance with the proposal of the Alma Mater Society the Senate agreed to class as a University prize a Prize to be provided by that Society for an essay on the oratory of Edmund Burke.

[margin] qualification for a scholarship [/margin]

The Senate agreed that the minimum qualification for a scholarship be the obtaining one half of the number of marks assigned to the subject to which the scholarship is attached.

The Senate approved of "the Feudal System" as the subject of a proposed Thesis by P.C. Macnee B.A.

The above minutes were read and sustained. 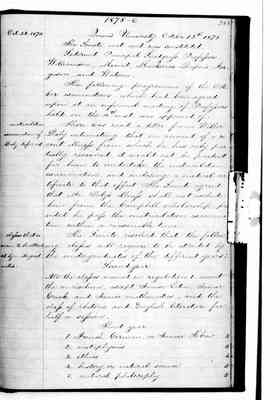 The following programme of the October examinations which had been agreed upon at an informal meeting of Professors held on the 4th inst. was approved of.

There was read a letter from Wilber Daly intimating that on account of a recent illness from which he has only partially recovered it would not be prudent for him to undertake the matriculation examination and enclosing a medical certificate to that effect. The Senate agreed that Mr. Daly's illness shall not exclude him from the Campbell scholarship, provided he pass the matriculaiton examination within a reasonable time.

[margin] classes that remain to be attended by undergraduates [/margin]

The Senate resolved that the following classes will require to be attended by the undergraduates of the different years:

Second year All the classes named in regulation I. anent the curriculum, except Junior Latin, Junior Greek and Junior mathematics, and the class of rhetoric and English literature for half a session. 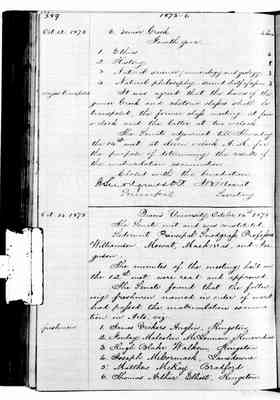 It was agreed that the hours of the Junior Greek and rhetoric classes shall be transposed, the former class meeting at four o'clock and the latter at two o'clock.

The Senate adjourned till Thursday the 14th inst. at eleven o'clock A.M. for the purpose of determining the results of the matriculation examination.

Closed with the benediction

The minutes of the meeting held on the 12th inst. were read and approved.

The Senate found that the following freshmen named in order of merit had passed the matriculation examination in Arts, viz. 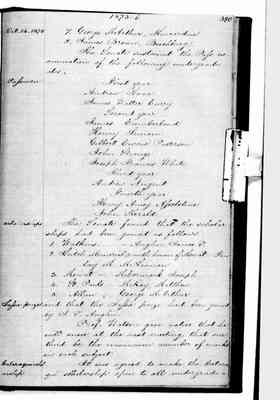 The Senate sustained the Pass examination of the folloiwng undergraduates:

The Senate found that the scholarships had been gained as follows:

and that the Tassie prize had been gained by J.V. Anglin.

Prof. Watson gave notice that he will move at the next meeting that one third be the minimum number of marks in each subject. 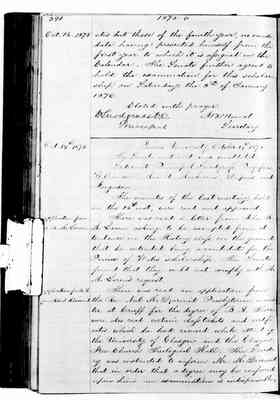 but those of the fourth year, no candidate having presented himself from the first year to which it is assigned in the Calendar. The Senate further agreed to hold the examination for this scholarship on Sasturday the 8th of January 1876.

The minutes of the last meeting held on the 14th inst. were read and approved.

There was read a letter from John B. McLaren asking to be exempted from attendance in the History class on the grounds that he intended being a candidate for the Prince of Wales scholarship. The Senate found that they could not comply with Mr. McLaren's request.

There was read an application from the Rev. Neil McDiarmid Presbyterian minister at Crieff for the degree of B.A. There were also read certain class tickets and certificates which he had received while attending the University of Glasgow and the Glasgow Free Church Theological Hall: The Secretary was instructed to inform Mr. McDiarmid that in order that a degree may be conferred upon him an examination is indispensable, 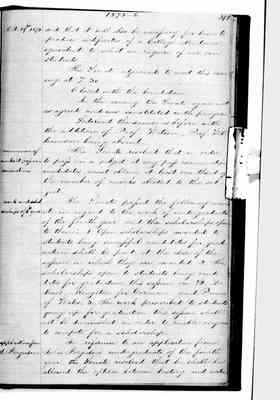 and that it will also be necessary for him to produce certificates of a College attendance equivalent to what we require of our own students.

The Senate adjourned to meet this evening at 7.30.

In the evening the Senate again met as agreed and was constituted with prayer.

Sederunt the same as before with the addition of Prof. Watson, Prof. Williamson being absent.

The Senate resolved that in order to pass on a subject at any pass examination candidates must obtain at least one third of the number of marks allotted to the subject.

In reference to an application from John Ferguson undergraduate of the fourth year, the Senate resolved that he shall be allowed the option between history and natu[ral] 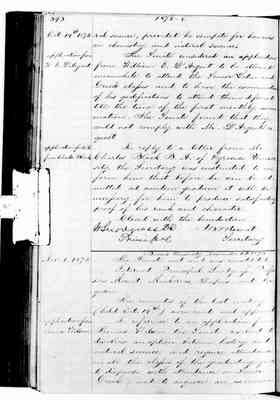 [natu]ral science, provided he compete for honours in chemistry and natural science.

The Senate considered an applicaiton from William E. D'Argent to be allowed meanwhile to attend the Senior Latin and Greek classes and to have the examination of his qualifications to attend them deferred till the time of the first monthly examination. The Senate found that they could not comply with Mr. D'Argent's request.

In reply to a letter from Mr. Charles Black B.A. of Syracuse University the Secretary was instructed to inform him that before he can be admitted ad eundem gradum it will be necessary for him to produce satisfactory proof of his rank and character.

Closed with the benediction.

The minutes of the last meeting (held Oct. 19th) were read and approved.

In reference to an applicaiton from Thomas Wilson the Senate resolved to disallow an option between history and natural science and require attendance on all the classes of the graduating year, to dispense with attendance on Senior Greek; and to require an examina[tion] 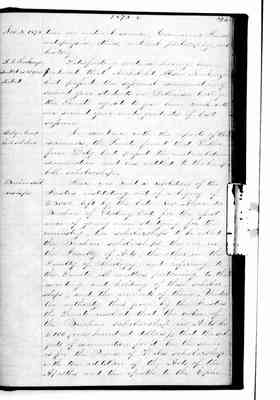 Satisfactory evidence having been produced that Archibald Alison Mackenzie had passed the sessional examination of second year students in Dalhousie College the Senate agreed to give him rank with our second year undergraduates of last session.

In accordance with the reports of the examiners, the Senate found that Wilber force Daly had passed the matriculation examination and was entitled to the Campbell scholarship.

There was read a resolution of the Trustees instituting out of a legacy of $3000 left by the late Rev. Alexander Buchan of Stirling, Ont. for the assistasnce of young men studying for the ministry, two scholarships to be called the Buchan scholarships the one in the Faculty of Arts, the other in the Faculty of Theology and referring to the awarding and holding of these scholarships, and the amounts of them. Under the authority, thus given by the Trustees the Senate resolved that the value of the Buchan scholarship in Arts be $100 (one hundred dollars); that the subjects of examination for it be the same as for the Prince of Wales scholarship with the addition of the Acts of the Apostles and the epistle to the Ephi[tians]