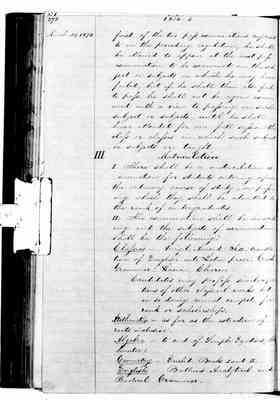 I. There shall be a matriculation examination for students entering upon the ordinary course of study, on passing which they shall be admitted to the rank of undergraduates.

Candidates may profess similar portions of other classical works but in so doing cannot compete for rank or scholarships.

Arithmetric - as far as the extraction of roots inclusive.

Geometry - Euclid, Book I and II 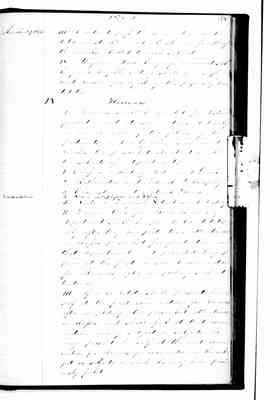 III. In order to pass this examination candidates must obain at least one fourth of the marks allotted to each subject.

IV. Ungrammatical language , incorrect spellings, or illegible writing shall be sufficient reason for rejecting the papers of candidates.

I. Honours shall be awarded for distinguished merit at examinations but only in one or more of the following departments, and only when such merit reaches the prescribed standard in all the subjects of a department:

II. Examinations for Honours in any department shall be open to Candidates only after they complete their attendance on classics prescribed for graduation in that department and provided they appear at the first or second examination for Honours after completing such attendance. 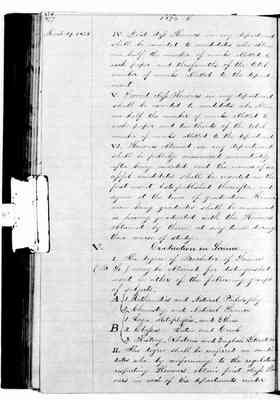 VI. Honours obtained in any department shall be publicly announced immediately after being awarded and the names of successful candidates shall be inserted in the first merit lists published thereafter, and again at the time of graduation Honour men being graduates shall be announced as having graduated with the honours obtained by them at any time during their course of study.

I. The degree of Bachelor of Science (B. Sc.) may be obtained for distinguished merit in either of the following groups of subjects:

II. The degree shall be conferred on candidates who by confomring to the regulation respecting Honours, obtain first class Honours in each of the departments under 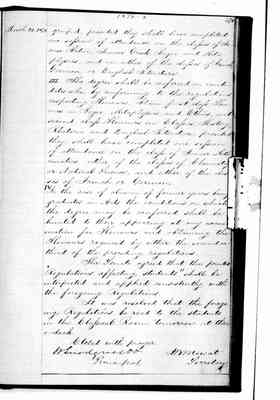 group A, provided they shall have completed one session of attendance on the classes of Junior Latin, Junior Greek, Logic and Metaphysics, and on either of the classes of French, German, or English Literature.

III. The degree shall be conferred on candidates who, by conforming to the regulations respecting Honours, obtain first class Honours in Logic, Metaphysics, and Ethics and second class Honours in Classics, History, Rhetoric and English Literature, provided they shall have completed one session of attendance on the class of Junior Mathematics, either of the classes of Chemistry, or Natural Science, and either of the classes of French or German.

IV. In the case of alumni of former years being graduates in Arts the conditions on which the degree may be conferred shall be limited to their appearing at any examination for Honours and obtaining the Honours required by either the second or third of the preceding regulations.

The Senate agreed that the printed "Regulations affecting students" shall be interpreted and applied consistently with the foregoing Regulations.

It was resolved that the foregoing Regulations be read to the students in the Classical Room tomorrow at three o'clock. 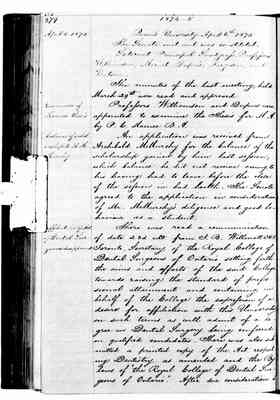 The minutes of the last meeting, held March 29th were read and approved.

Professors Williamson and Dupuis were appointed to examine the Thesis for M.A. by P.C. Macnee B.A.

[margin] balance of scholarship to A. McMurchy [/margin]

An application was received from Archibald McMurchy for the balance of the scholarship gained by him last session, which balance he did not receive owing to his having had to leave before the close of the session in bad health. The Senate agreed to the application in consideration of Mr. McMurchy's diligence and good behaviour as a student.

There was read a communication of date 23d ult. from J.B. Willmott D.D.L Toronto, Secretary of the Royal College of Dental Surgeons of Ontario setting forth the aims and efforts of the said College towards raising the standard of professional attainment and containing in behalf of the College the expression of a desire for affliation with this University on such terms as will admit of a degree in Dental Surgery being conferred on qualified candidates. There was also submitted a printed copy of the Act respecting Dentistry as amended and the By-laws of "The Royal College of Dental Surgeons of Ontario". After due consideration 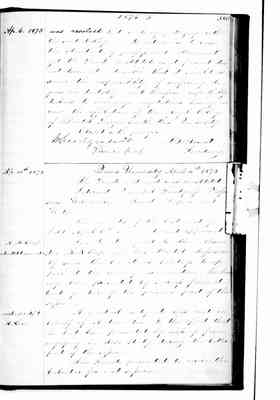 The minutes of the last meeting held April 6th were read and approved.

The Senate agreed to allow Alexander McKillop who has attended classes only since the Christmas holidays to appear at the coming examination, he having been prevented by sickness from attending during the previous part of the session.

A medical certificate was read in behalf of Andrew Love to the effect that he had been prevented by sickness from engaging in close study during the latter part of the session.

The Senate proceeded to revise the Calendar for next session. 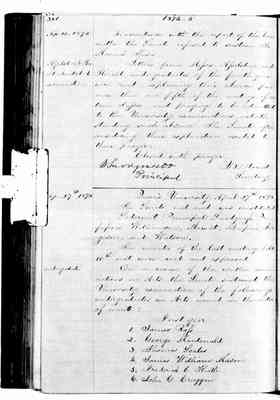 In accordance with the report of the Committee the Senate refused to sustain Mr. Macnee's Thesis.

Letters from Messrs. Asselstine and Herald undergraduates of the fourth year were read, explaining their absence from more than one fifth of the meetings of certain classes, and praying to be admitted to the University examinations notwithstanding such absence. The Senate after considering their explanation acceded to their prayer.

The minutes of the last meeting held 10th inst. were read and approved.

On a review of the written examinations in Arts the Senate sustained the University examination of the following undergraduates in Arts named in the order of merit: 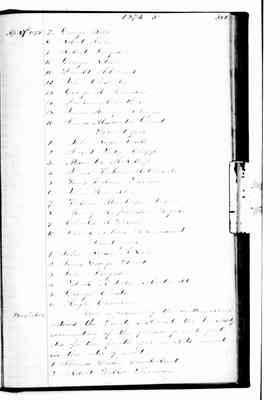 On a review of the written examinations the Senate sustained the University examination of the following undergraduates of the fourth year in Arts, named in the order of merit. 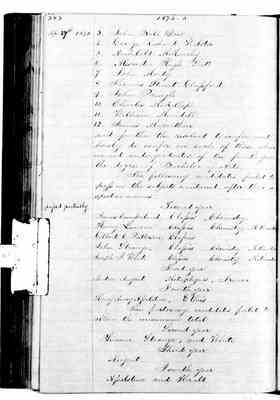 and further the resolved to confer and hereby do confer on each of these above named undergraduates of the fourth year the degree of Bachelor of Arts.

The following candidates failed to pass in the subjects mentioned after their respective names.

The following candidates failed to obtain the minimum total. 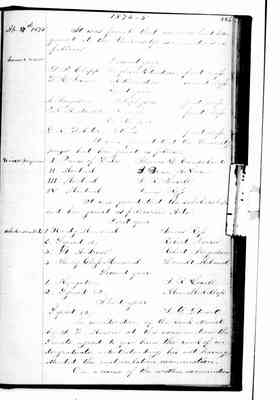 It was found that honours had been gained at the University examinations as follows:

It was found that the University prizes had been gained as follows:

It was found the scholarships had been gained as follows in Arts:

In consideration of the rank attained by J. W. Mason at this examination the Senate agreed to give him the rank of undergraduate notwithstanding his not having attended the mtriculation examination.

On a review of the written examination