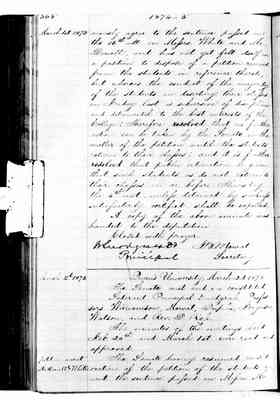 unanamously agree to the sentence passed on the 16th utl. on Messrs. White and McDowell, and has not yet felt itself in a position to dispose of a petition received from the students in reference thereto, but whereas the conduct of the majority of the students in deserting their classes on Friday last is subversive of discipline and detrimental to the best interests of the College: Therefore resolved that no further action can be taken by the Senate in the matter of the petition until the students return to their classes: and it is further resolved that public intimation be given that such students as do not return to their classes on or before Thursday the 4th inst. unless detained by sickness satisfactorily certified, shall be expelled.

A copy of the above minute wsa handed to the deputation.

The minutes of the meetings held Feb 2th and March 1st were read and approved. 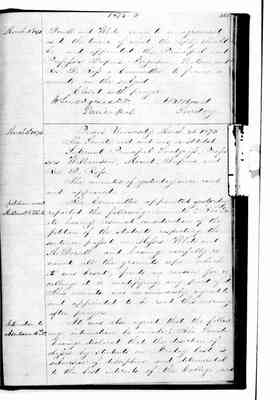 [Mc]Dowell and White came to an agreement as to the tenour of what the reply should be, and appointed the Principal and Professors Dupuis, Ferguson, Watson and Rev. D. Ross a Committee to frame a minute on the subject.

The minutes of yesterday were read and approved.

The Committee appointed yesterday reported the following minute: The Senate having resumed consideration of the petition of the students respecting the sentence passed on Messrs. White and McDowell, and having carefully reviewed all the grounds upon which it was based, finds no reason for recalling it or modifying any part of it. This minute was unanimously agreed to and appointed to be read this morning after prayer.

It was also agreed that the following intimation be made: The Senate having declared that the desertion of classes by students on Friday last is subversive of discipline and detrimental to the best interests of the College, and 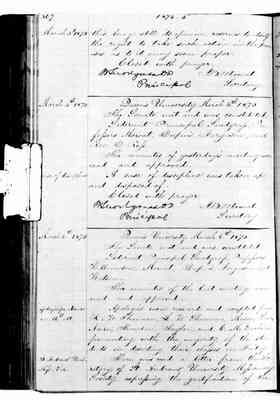 this being still its opinion, reserves to itself the right to take such action in the premises as to it may seem proper.

A case of discipline was taken up and disposed of.

The minutes of the last meeting were read and approved.

Apologies were received and accepted from R.W. Shannon, L.W. Shannon, Mason, Love, Nairn, Thomson, Taylor, and C. McEachern, for uniting with the majority of the students in deserting their classes on Friday.

There was read a letter from the Secretary of St. Andrews' University Missionary Society expressing the gratification of the 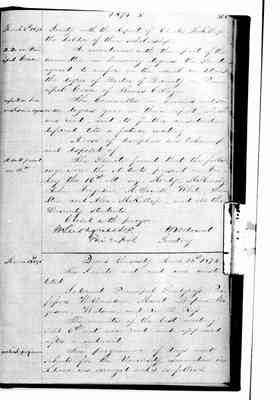 Society with the Report of Charles McKillop the holder of their scholarship.

In accordance with the report of the committee on honorary degrees the Senate agreed to confer on the usual conditions the degree of Doctor of Divinity on Principal Coven of Knox's College.

The Committee on honours and science degrees gave in their report, which was read, and its further consideration deferred till a future meeting.

A case of discipline was taken up and disposed of.

The Senate found that the following were the students present on Friday the 16th ult. viz. Mordy, McMurchy, John Ferguson, McDowell, White, Hamilton, and Alex. McKillop, and all the Divinity students.

The minutes of the last meeting held 6th inst. were read and approved after amendment.

The programme of days and subjects for the University examination in Medicine was arranged and is as follows: 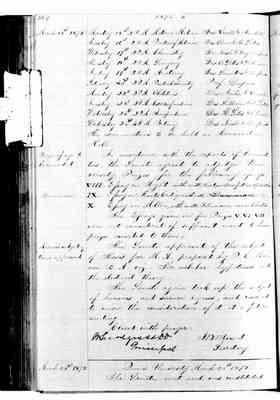 The examinations to be held in Convocation Hall.

In accordance with the report of Committees, the Senate agreed to adjudge University Prizes for the following essays VIII. Essay on Light with motto, Diaitque Deus Fiat lusc et [?] IX. Essay on Kant's Critique with motto, Runciman X. Essay on Milton, with motto, Patriacara, carie libertus.

The Essays given in for Prizes V, VI, VII were not considered of sufficient merit to have prizes awarded to them.

The Senate approved of the subject of Thesis for M.A. proposed by P. C. Macnee B.A. viz. The nebular hypothesis and the electrical theory.

The Senate again took up the subject of honours, and science degrees, and resolved to renew the consideration of it at a future meeting. 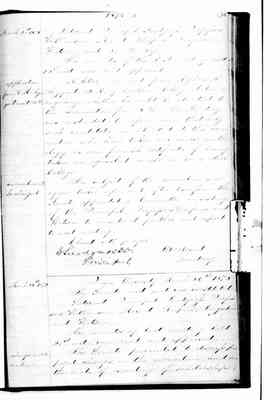 The minutes of the last meeting held 13th inst. were read approved.

A letter was read from Alpheus McTaggart B.A. of Earlham College, Indiana, enquiring whether he could be admitted to the examination for B.D. The Secretary was instructed to inform him that only such candidates are admitted to this examination who have taken our course in theology or can furnish certificates of having taken an equivalent course in some other College.

[margin] curriculum to be changed [/margin]

The subject of the curriculum was again taken up and after discussion the Senate appointed a Committee consisting of the Principal, Professors Dupuis and Watson to consider it further and report to next meeting.

The minutes of last meeting held 20th inst. were read and approved.

The Senate proceeded to discuss proposed changes in the curriculum and in the mode of awarding of scholarships. 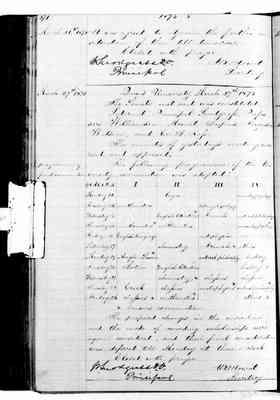 It was agreed to adjourn the farther consideration of them till tomorrow.

The following programme of the University examination was adopted:

The proposed changes in the curriculum and the mode of awarding scholarships were again considered, and their final consideraiton was deferred till Monday at three o'clock. 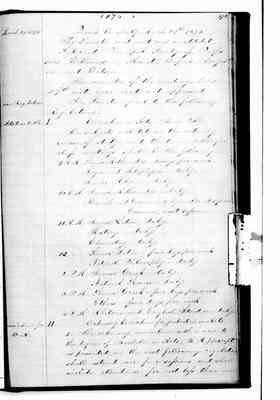 The minutes of the meeting held 27th inst. were read and approved.

The Senate agreed to the following Regulations:

I. Curriculum in Arts - Time table: The subjects included in the ordinary course of study and the time table for class meetings shall be the following:

I. The ordinary curriculum with a view to the degree of Bachelor in Arts (B.A.) (except as provided in the next following regulation) shall extend over four sessions and shall include attendance for not less than one 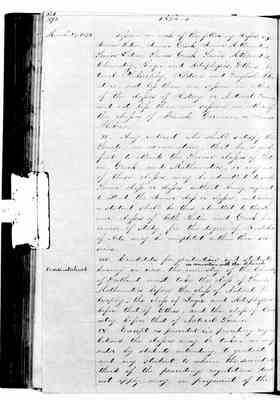 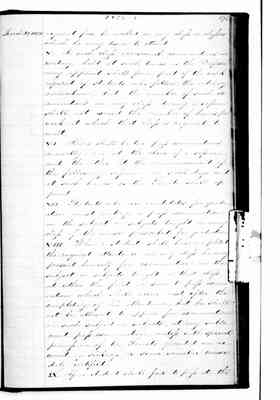 required fees, be enrolled in any class or classes which he may desire to attend.

V. In each class occasional examination in writing held at such times as the Professor may appoint shall form part of the work required of students who follow the ordinary curriculum, but the number of such examinations in any class during a session shall not exceed the number of hours per week at which that class is required to meet.

VI. There shall be two pass examinations annually - one at the close of a session and the other at the commencement of the following session - on such days and at such hours as the Senate shall appoint.

VII. Students who are candidates for graduation must undergo a pass examination on the subject or subjects taught in every class of the course prescribed for graduation.

VIII. When a student shall have completed the required attendance on any class he may present himself for examination on the subject or subjects tonight in that class, at either the first or second pass examination which shall occur next after the completing of his attendance, but he shall not be allowed to appear for examination on such subject or subjects, at any subsequent pass examination unless with special permission of the Senate granted on account of sickness or some similar cause duly certified.

IX. If a student shall fail to pass at the