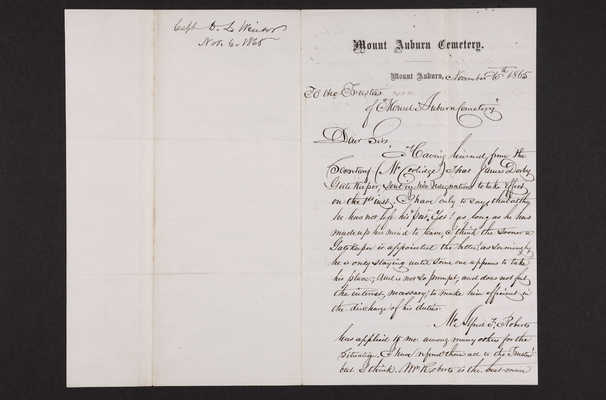 To the Trustees of Mount Auburn Cemetery

Dear Sirs, Having learned from the Secretary (Mr. Coolidge) that James Dorby Gatekeeper, sent in his resignation to take effect on the [?]. I have only to say that altho he has not left his "post" Yet! as long as he has made up his mind to leave, I think the sooner a Gatekeeper is appointed the better! as seemingly he is only staying until someone appears to take his place; and is not so prompt, and does not feel the interest, necessary, to make him efficient in the discharge of his duties.

Mr. Alfred F. Roberts has applied to me among many other for the Situation. I have referred them all to the Trustees but I think Mr. Roberts is the best man

Last edit 4 months ago by Graveyard_girl 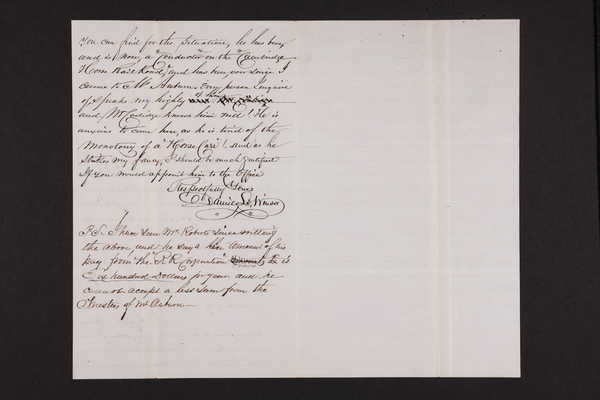 you can find for the Situation, he has been and is now, a "conductor" on the "Cambridge Horse Rail Road" and has been, [on?] since I came to Mount Auburn. Every person I inquire of, speaks very highly of him and Mr. Coolidge knows him well! He is anxious to come here, as his is tired of the monotony of a "Horse [Car?]"! and as he strikes my fancy, I should be much gratified if you would appoint him to the office Respectfully Yours, Daniel L. Winsor

P.S. I have seen Mr. Robers sinces writing the above, and he says the amount of his pay from the "R.R. Corporation" is Six hundred Dollars per year and he cannot accept a less sum from the Trustees of Mt. Auburn

Last edit 4 months ago by Graveyard_girl
Displaying all 2 pages

Transcribe the historic 19th-century materials that tell the story of America's first rural cemetery and the first designed landscape open to the public in North America.