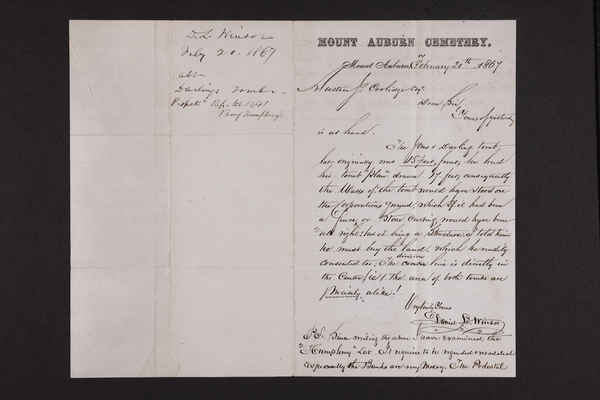 Dear Sir, Yours of yesterday is at hand.

The Jones & Darling tomb lot originally was 15 feet, front, has had his tomb "plan" drawn. 17 feet, consequently the Walls of the tomb would have stood on the Corporations ground, which if it had been a fence or stone curbing, would have been all right: but it being a Structure, I told him he must buy the land. Which he readily consented too: The division line is directly in the centre (ie). The area of both tombs are precisely alike!

Very truly Tours Daniel L Winsor P.S. Since writing the above I have "examined" the "Humphrey" Lot. It requires to be regraded & resodded especially the Banks are very Mossy. The Pedestal

Last edit 3 months ago by hminbrd 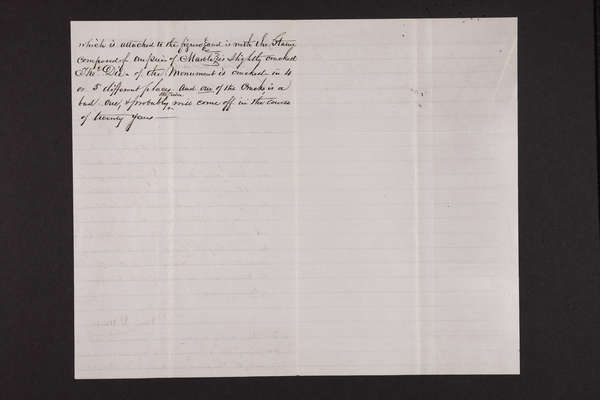 which is attached to the figure, {and is with the Statue composed of one piece of Marble,} is slightly cracked The "Die,, of the Monument is cracked in 4 or 5 different places and one of the cracks is a bad one, & probably^the piece will come off in the course of twenty years --

Last edit 3 months ago by hminbrd
Displaying all 2 pages

Transcribe the historic 19th-century materials that tell the story of America's first rural cemetery and the first designed landscape open to the public in North America.