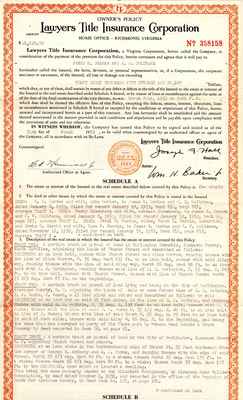 Lawyers Title Insurance Corporation, a Virginia Corporation, herein called the Company, in consideration of the payment of the premium for this Policy, hereby covenants and agrees that it will pay to JAMES R. GRAHAM AND J. W. COLTRANE hereinafter called the Insured, the heirs, devisees, or personal representatives, or, if a Corporation, the corporate successor or successors, of the Insured, all loss or damage not exceeding FORTY EIGHT THOUSAND FIVE HUNDRED AND NO 100 Dollars, which they, or any of them, shall sustain by reason of any defect or defects in the title of the Insured to the estate or interest of the Insured in the real estate described under Schedule A hereof, or by reason of liens or encumbrances against the same as of the date of the final examination of the title thereto, to-wit: March 20th, 1953 at 3:00 P. M., which date shall be deemed the effective date of this Policy, excepting the defects, estates, interest, objections, liens or encumbrances mentioned in Schedule B hereof or excepted by the conditions or stipulations of this Policy, hereto annexed and incorporated herein as a part of this contract. Any loss hereunder shall be established and the amount thereof ascertained in the manner provided in said conditions and stipulations and be payable upon compliance with the provision of same and not otherwise.

IN WITNESS WHEREOF, the Company has caused this Policy to be signed and sealed as of the 24th day of March 1953, to be valid when countersigned by an authorized officer or agent of the Company, all in accordance with its By-Laws.

SCHEDULE A 1. The estate or interest of the Insured in the real estate described below covered by this Policy is fee simple

2. The deed or other means by which the estate or interest covered by this Policy is vested in the Insured.

3. Description of the real estate in which the Insured has the estate or interest covered by this Policy.

TRACT THREE: A certain tract or parcel of land in the City of Burlington, Alamance County, N. C. adjoining Church Street and others. BEGINNING at an iron stake in the Northwesterly edge of Church St. 55 feet Northeast from the corner of George W. Anthony and W. J. Burke, and running thence with the edge of said Street, North 55 2/3 deg. East 60 ft. to a stake; thence North 35 deg. West 175 ft. to a stake; thence South 55 2/3 deg. West 60 ft. to a stake; thence South 35 deg. East 175 ft. to the BEGINNING, upon which is located a dwelling. This being the same property deeded to Ann Elizabeth Montgomery, by Alamance Home Builders Association, by deed dated October 1, 1931, and recorded in the office of the Register of Deeds for Alamance County, in Deed Book No. 101, at page 380. * continued on back 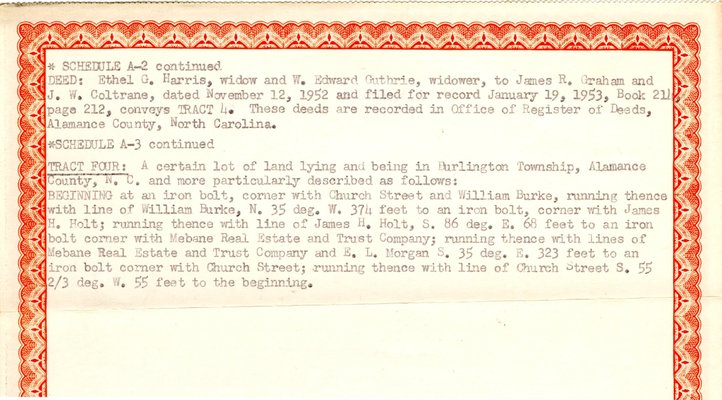 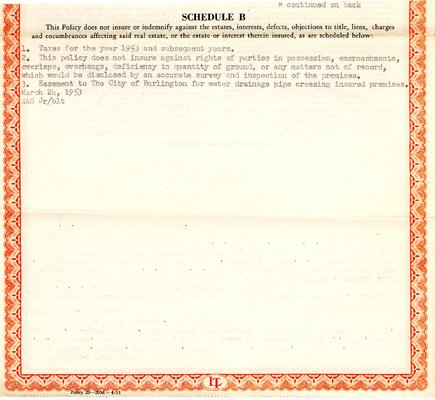 SCHEDULE B This policy does not insure or indemnify against the estates, interests, defects, objections to title, liens, charges and encumbrances affecting said real estate, or the estate or interest therein insured, as are scheduled below:

1. Taxes for the year 1953 and subsequent years. 2. This policy does not insure against rights of parties in possession, encroachments, overlaps, overhangs, deficiency in quantity of ground, or any matters not of record, which would be disclosed by an accurate survey and inspection of the premises. 3. Easement to The City of Burlington for water drainage pipe crossing insured premises. March 24, 1953 WAH Jr/blt