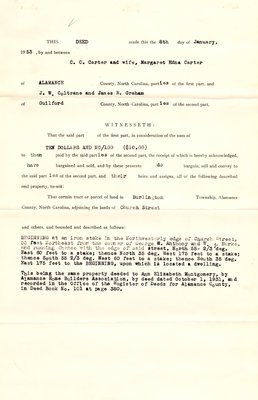 That certain tract or parcel of land in Burlington Township, Alamance County, North Carolina, adjoining the lands of Church Street and others, and bounded and described as follows:

This being the same property deeded to Ann Elizabeth Montgomery, by Alamance Home Builders Association, by deed dated October 1, 1931, and recorded in the Office of the Register of Deeds for Alamance County, in Deed Book No. 101 at page 380. 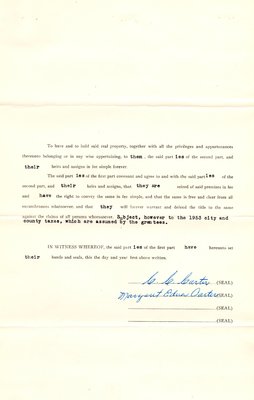 To have and to hold said real property, together with all the privileges and appurtenances thereunto belonging or in any wise appertaining, to them, the said parties of the second part, and their heirs and assigns in fee simple forever.

The said parties of the first part covenant and agree to and with the said parties of the second part, and their heirs and assigns, that they are seized of said premises in fee and have the right to convey the same in fee simple, and that the same is free and clear from all encumbrances whatsoever, and that they will forever warrant and defend the title to the same against the claims of all persons whomsoever. Subject, however to the 1953 city and county taxes, which are assumed by the grantees.

IN WITNESS WHEREOF, the said parties of the first part have hereunto set their hands and seals, this the day and year first above written. 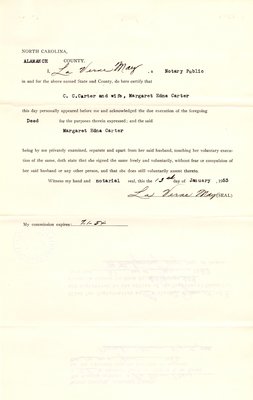 I, La Verne May, a Notary Public in and for the above named State and County, do here certify that C. C. Carter and wife, Margaret Edna Carter this day personally appeared before me and acknowledged the due execution of the foregoing Deed for the purposes therein expressed; and the said Margaret Edna Carter being by me privately examined, separate and apart from her said husband, touching her voluntary execution of the same, doth state that she signed the same freely and voluntarily, without fear or compulsion of her said husband or any other person, and that she does still voluntarily assent thereto.

Witness my hand and notarial seal, this the 13th day of January, 1953 La Verne May (SEAL) 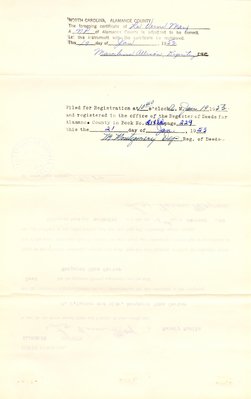 NORTH CAROLINA, ALAMANCE COUNTY The foregoing certificate of La Verne May A NP of Alamance County is adjudged to be correct. Let this instrument with the certificate be registered. This 19 day of Jan, 1953. Marcelina Allison, Deputy C.S.C.