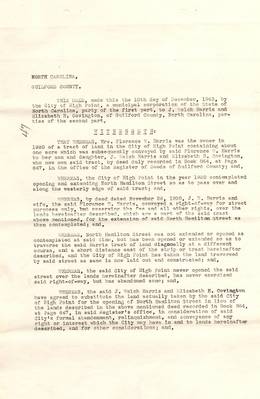 THIS DEED, made this the 10th day of December, 1943, by the City of High Point, a municipal corporation of the State of North Carolina, party of the first part, to J. Welch Harris and Elizabeth H. Covington, of Guilford County North Carolina, parties of the second part,

WITNESSETH: THAT WHEREAS, Mrs. Florence W. Harris was the owner in 1920 of a tract of land in the City of High Point containing about one acre which was subsequently conveyed by said Florence W. Harris to her son and daughter, J. Welch Harris and Elizabeth H. Covington, who now own said tract, by deed duly recorded in Book 864, at Page 647, in the office of the Register of Deeds of Guilford County; and,

WHEREAS, the City of High Point in the year 1920 contemplated opening and extending North Hamilton Street so as to pass over and along the westerly edge of said tract; and,

WHEREAS, by deed dated November 26, 1920, J. W. Harriss and wife, the said Florence W. Harris, conveyed a right-of-way for street purposes only, but reserving the fee and all other rights, over the lands hereinafter described, which are a part of the said tract above mentioned, for the extension of said North Hamilton Street as then contemplated; and,

WHEREAS, North Hamilton Street was not extended or opened as contemplated at said time, but has been opened or extended so as to traverse the said Harris tract of land diagonally at a different course, and a short distance east of the strip or tract hereinafter described, and the City of High Point has taken the land traversed by said street as same is now laid out and constructed; and,

WHEREAS, the said City of High Point never opened the said street over the lands hereinafter described, has never exercised said right-of-way, but has abandoned same; and,

WHEREAS, the said J. Welch Harris and Elizabeth H. Covington have agreed to substitute the land actually taken by the said City of High Point for the opening of North Hamilton Street in lieu of the lands described in the above mentioned deed recorded in Book 864, at Page 647, in said Register's office, in consideration of said City's formal abandonment, relinquishment, and conveyance of any right or interest which the City may have in and to lands hereinafter described, and for other considerations; and, 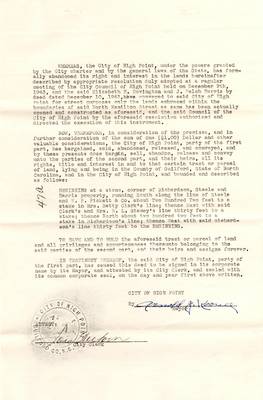 WHEREAS, the City of High Point, under the powers granted by the City charter and by the general laws of the State, has formally abandoned its right and interest in the lands hereinafter described by appropriate resolution duly adopted at a regular meeting of the City Council of High Point held on December 9th, 1943, and the said Elizabeth H. Covington and J. Welch Harris by deed dated December 10, 1943, have conveyed to said City of High Point for street purposes only the lands embraced within the boundaries of said North Hamilton Street as same has been actually opened and constructed as aforesaid, and the said Council of the City of High Point by the aforesaid resolution authorized and directed the execution of this instrument.

NOW, THEREFORE, in consideration of the premises, and in further consideration of the sum of One ($1.00) Dollar and other valuable considerations, the City of High Point, party of the first part, has bargained, sold, abandoned, released, and conveyed, and by these presents does bargain, sell, abandon, releaase, and convey unto the parties of the second part, and their heirs, all its rights, title and interest in and to that certain tract or parcel of land, lying and being in the County of Guilford, State of North Carolina, and in the City of High Point, and bounded and described as follows:

BEGINNING at a stone, corner of Richardson, Steele and Harris property, running South along the line of Steele and W. P. Pickett & Co. about Two Hundred Two feet to a stake in Mrs. Betty Clark's line; thence East with said Clark's and Mrs. W. L. Stamey's line thirty feet to a stake in Richardson's line; thence West with said Richardson's line thirty feet to the BEGINNING.

TO HAVE AND TO HOLD the aforesaid tract or parcel of land and all privileges and appurtenances thereunto belonging to the said parties of the second part, and their heirs and assigns forever.

IN TESTIMONY WHEREOF, the said City of High Point, party of the first part, has caused this deed to be signed in its corporate name by its Mayor, and attested by its City Clerk, and sealed with its common corporate seal, on the day and year first above written. 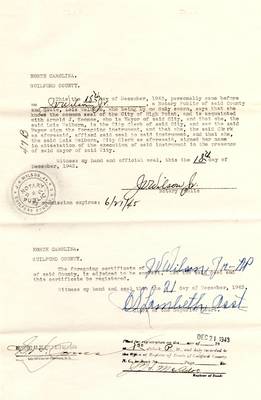 Witness my hand and official seal, this the 18th day of December, 1943.

The foregoing certificate of J. V. Wilson, Jr. NP of said County, is adjudged to be correct. Let the said deed and this certificate be registered.