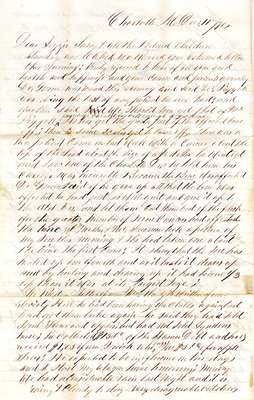 Dear Lizzie [Suziy?] & all the Beloved children Sunday One O Clock we Received your Esteemed letter this morning; Truly rejoiced to hear of all your good health and happiness and your course and persuits generally. Dr. Greene was round this morning and said Mr. Piggott was doing the best of any patient he ever had; and further said we should soon get shet of Mr Piggott, meaning I would be well enough to go home. He has got the greater part of the affected bone off; there is some scales yet to come off. There was a new patient came in last week with a cancer about the top of the head about the size of a 1/2 dollar. he went out and saw one of the Charlotte Drs., he told him his cancer was incurable Because the Bone was affected. Dr Greene said if he gave up all that the bone was affected he had just as well quit and give it up to the old Drs, and let them cut them out of the flesh for the greater number of severe cancers had effected the bone. Mother & Mr Freeman took a pattern of my sore this morning & she had taken one about the time she first came; It shows that the sore has healed up one fourth and as it heals it draws up and by healing and drawing up it had become 1/3 less than it was at its largest size;

We Rec'd a letter from Wm. the 9th written from Society Hill he had been having the chills again, but had got them broke again he said they had sold some Flour and apples; but had not sold Lyndons horse; he collected $15.00 of the Haines Debt and had received $1.05 from Quick who owed Me $5.00 for apple Trees; He expected to be in florence in two days and to start My wagon home tomorrow; Monday we had a Considerable rain last Night and it is rainy & Cloudy to day Very disagreeable outdoors. 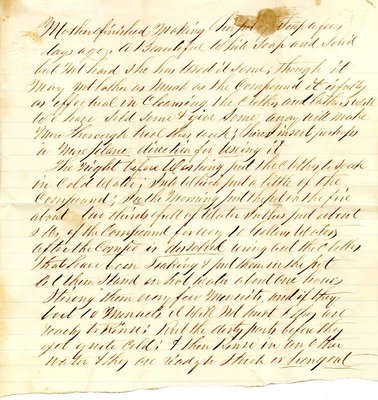 Mother finished Making her pot of Soap a few days ago. A Beautiful White Soap and solid but not hard. she has used it some; though it may not lather as much as the compound it is fully as effectual in Cleansing the clothes and lathers well. We have sold some & give some away will make more thorough trial this week; [here?] I insert perhaps a more plane direction for useing it.

The night before washing put the clothes to soak in cold water; Into which put a little of the compound; In the morning put the pot on the fire about two thirds full of water. In this put about 2 lts of the compound for every 10 Gallons Water. After the compd is dissolved wring out the clothes that have been soaking & put them in the pot. let them stand stand in hot water about one hour, stiring them every few Minuits and if they boil 10 Minuits it will not hurt & they are ready to Rinse: Rub the dirty parts before they get quite cold; & then Rinse in an other water & they are ready to starch or hang out. 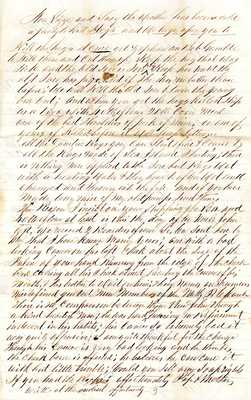 Now Lizze and Susy the weather has become cold aplenty to kill Hogs and we urge upon you to kill the hogs at once. get Zaphan and Bob Gamble to Kill them and cut them up. Keep the hog that was sick and the old sows' sow pig Keep her until the old Sow has pigs and if she does no better than before, we will kill the old sow & turn the young one out; and when you get the hogs killed ship us a 1 Box with 40 lbs flour 20 lbs corn meal one of the best shoulders of pork of mine, or one of yours if killed before it will keep better. All the cambric Rags you can St[out?] fine & coarse & all the Rags made of Sea Island shirting; there is nothing now applied to the sore but Rags wet with a healing water & they have to often wet and changed and thrown into the fire and if you have made any raise of my old pumps send them. The Reason I insist on your shipping the Box and 40 lb flour at least is this the day after Uncle John left, we receved 2 Boarders from So. Ca sent here by Wm. that I have known many years; one with a bad looking cancer on his left cheek about the size of the Palm of your hand Running from the edge of the cheek and covering all his cheek almost Reaching the corner of his mouth, & his brother to wait on him: Their names are Freeman nice refined genteel men members of the Meth. P. Church There is no comparison between them & Unc John though a kind hearted man; he was hard of hearing no Refinement indecent in his habits; his cancer so extremely bad it was quite offensive; I am quite thankful for the change though his cancer is very bad looking and he thinks the cheek bone is affected; he believes he can cure it with but little trouble; Could you sell any Soap [?] If you had the Recps? Affectionately Pap & Mother Write at the earliest opportunity.