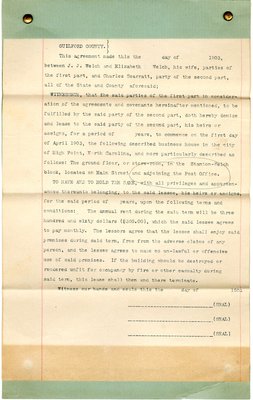 This agreement made this the [blank] day of [blank] 1903, between J. J. Welch and Elizabeth Welch, his wife, parties of the first part, and Charles Scarratt, party of the second part, all of the State and County aforesaid;

WITNESSETH, that the said parties of the first part in consideration of the agreements and covenants hereinafter mentioned, to be fulfilled by the said party of the second part, doth hereby demise and lease to the said party of the second part, his heirs or assigns, for a period of [blank] years, to commence on the first day of April 1903, the following described business house in the city of High Point, North Carolina, and more particularly described as follows: The ground floor, or store-room, in the Stanton-Welch block, located on Main Street and adjoining the Post Office.

TO HAVE AND TO HOLD THE SAME, with all privileges and appurtenances thereunto belonging, to the said lessee, his heirs or assigns, for the said period of [blank] years, upon the following terms and conditions: The annual rent during the said term will be three hundred and sixty dollars ($360.00), which the said lessee agrees to pay monthly. The lessors agree that the lessee shall enjoy said premises during said term, free from the adverse claims of any person, and the lessee agrees to make no un-lawful or offensive use of said premises. If the building should be destroyed or rendered unfit for occupancy by fire or other casualty during said term, this lease shall then and there terminate. 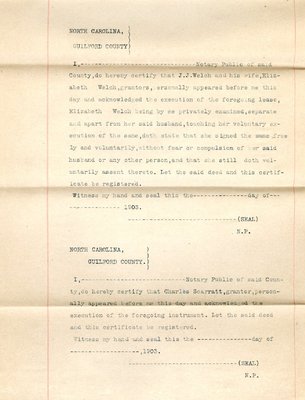 I, [blank] Notary Public of said County, do hereby certify that J. J. Welch and his wife, Elizabeth Welch, grantors, personally appeared before me this day and acknowledged the execution of the foregoing lease, Elizabeth Welch being by me privately examined, separate and apart from her said husband, touching her voluntary execution of the same, doth state that she signed the same free ly and voluntarily, without fear or compulsion of her said husband or any other person, and that she still doth voluntarily assent thereto. Let the said deed and this certificate be registered.

I, [blank] Notary Public of said County, do hereby certify that Charles Scarratt, grantor, personally appeared before me this day and acknowledged the execution of the foregoing instrument. Let the said deed and this certificate be registered.