Sketch of a journey through the western states of North America, 1827 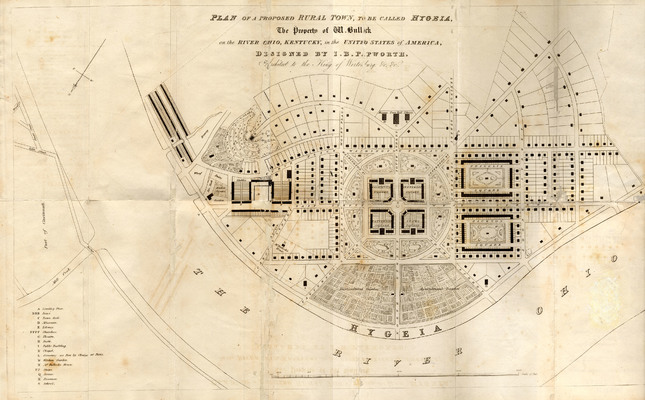 Last edit about 2 months ago by Filson Historical Society 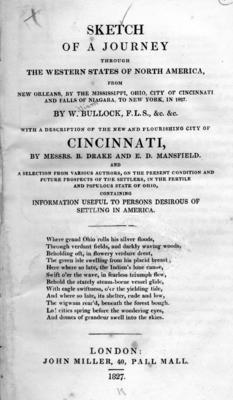 SKETCH OF A JOURNEY THROUGH THE WESTERN STATES OF NORTH AMERICA FROM NEW ORLEANS, BY THE MISSISSIPPI, OHIIO, CITY OF CINCINNATI AND FALLS OF NIAGARA, TO NEW YORK, IN 1827 BY W. BULLOCK, F.L.S., &c. &c. WITH A DESCRIPTION OF THE NEW AND FLOURISHING CITY OF CINCINNATI, BY MESSRS. B. DRAKE AND E. D. MASFIELD. AND A SELECTION FROM VARIOUS AUTHORS, ON THE PRESENT CONDITION AND FUTURE PROSPECTS OF THE SETTLERS, IN THE FERTILE AND POPULOUS STATE OF OHIO, CONTAINING INFORMATION USEFUL TO PERSNS DESIROUS OF SETTLING IN AMERICA.

Where grand Ohio rolls his silver floods, Through verdant fields, and darkly waving woods, Beholding oft, in flowery verdure drest, The green isle swelling from his placid breast; Here where so late, the Indian's lone canoe, Swift o'er the wave, in fearless triumph flew, Behold the stately steam-borne vessel glide, With eagel swiftness, o'er the yielding tide, Ande where so late, its shelter, rude and low, The wigwam rear'd, beneath the forest bough. Lo! cities spring before the wondering eyes, And domes of grandeur swell into the skies. 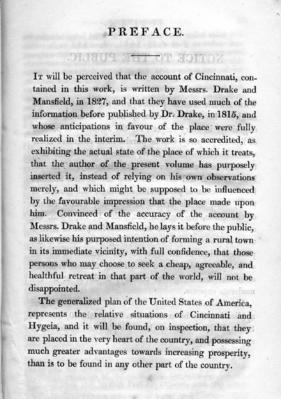 It will be perceived that the account of Cincinnati, contained in this work, is written by Messrs. Drake and Mansfield, in 1827, and that they have used much of the information before published by Dr. Drake, in 1815, and whose anticipations in favour of the place were fully realized in the interim. The work is so accredited, as exhibiting the actual state of the place of which it treats, that the author of the present volume has purposely inserted it, instead of relying on his own observations merely, and which might be supposed to be influenced by the favourable impression that the place made upon him. Convinced of the accuracy of the account by Messrs. Drake and Mansfield, he lays it before the public, as likewise his purposed intention of forming a rural town in its immediate vicinity, with full confidence, that those persons who may choose to seek a cheap, agreeable, and healthful retreat in that part of the world, will not be dissapointed.

The generalized plan of the United States of America, represents the relative situations of Cincinnati and Hygeia, and it will be found, on inspection, that they are placed in the very heart of the country, and possessing much greater advantages towards increasing prosperity, than is to be found in any other part of the country. 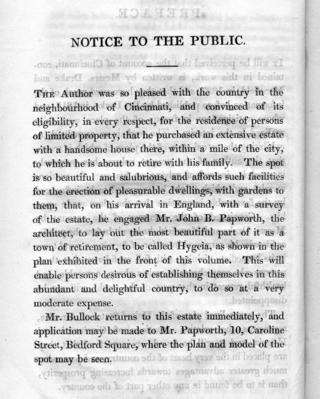 NOTICE TO THE PUBLIC

The Author was so pleased with the country in the neighborhood of Cincinnati, and convinced of its eligibility, in every respect, for the residence of persons of limited property, that he purchased an extensive estate with a handsome house there, within a mile of the city, to which he is about to retire with his family. The spot is so beautiful and salubrious, and affords such facilities for the erection of pleasurable dwellings, with gardens to them, that, on his arrival in England, with a survey of the estate, he engaged Mr. John B. Papworth, the architect, to lay out the most beautiful part of it as a town of retirement, to be called Hygeia, as shown in the plan exhibited in the front of this volume. This will enable persons desirous of establishing themselves in this abundant and delightful country, to do so at a very moderate expense.

Mr. Bullock returns to this estate immediately, and application may be made to Mr. Papworth, 10, Caroline Streer, Bedford Square, where the plan and model of the spot may be seen. 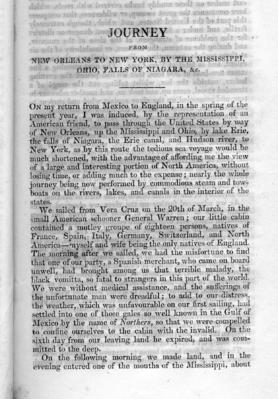 JOURNEY FROM NEW ORLEANS TO NEW YORK, BY THE MISSISSIPPI, OHIO, FALLS OF NIAGARA, &c.

On my return from Mexico to England, in the spring of the present year, I was induced, by the representation of an American friend, to pass through the United States, by way of New Orleans, up the Mississippi and Ohio, by lake Erie, the falls of Niagara, the Erie canal, and Hudson river, to New York, as by this route the tedious sea voyage would be much shortened, with the advantage of affording me the view of a large and interesting portion of North America, without losing time, or adding much to the expense; nearly the whole journey being now performed by commodious steam and towboats on the rivers, lakes, and canals in the interior of the states.

We sailed from Vera Cruz on the 20th of March, in the small American schooner General Warren; our little cabin contained a motley groupe of eighteen persons, natives of France, Spain, Italy, Germany, Switzerland, and North America—myself and wife being the oly natives of England. The morning after we sailed, we had the misfortune to find that one of our party, a Spanish merchant, who came on board unwell, had brought among us that terrible malady, the black vomitta, so fatal to strangers in this part of the world. We were without medical assistance, and the sufferings of the unfortunate man were dreadful; to add to our distress, the weather, which was unfavourable on our first sailing, had settled into one of those gales so well known in the Gulf of Mexico by the name of Northers, so that we were compelled to confine ourselves to the cabin with the invalid. On the sixth day from our leaving land he expired, and was committed to the deep.

On the following morning we made land, and in the evening entered one of the mouths of the Mississippi, about