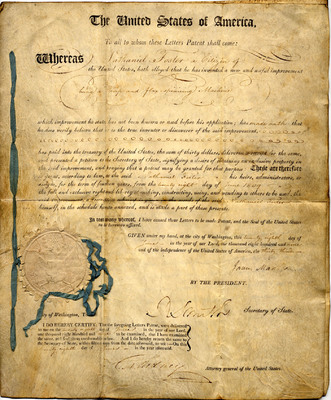 The United States of America To all to whom these Letters Patent shall come: Whereas Nathaniel Foster a Citizen of the United States, hath alleged that he has invented a new and useful improvement being a Hemp and flax spinning Machine

which improvement he states has not been known or used before his application ; has made oath that he does verily believe he is the true inventor or discoverer of said improvement,

has paid into the treasury of the United States, the sum of thirty dollars, delivered a receipt for the same, and presented a petition to the Secretary of State, signifying a desire of obtaining an exclusive property in the said improvement, and praying that a patent may be granted for that purpose: These are therefore to grant, according to law, to the said Nathaniel Foster his heirs, administrators, or assigns, for the term of fourteen years, from the twenty eight day of June 1809 the full and exclusive right and liberty of making, constructing, using, and vending to others to be used, the said improvement, a description ------------ of the said Nathaniel Foster himself, in the schedule hereto annexed, and is made a part of these presents.

In testimony whereof, I have caused these Letters to be made Patent, and the Seal of the United States to be hereunto affixed.

GIVEN under my hand, at the city of Washington, this twenty eighth day of June- in the year of our Lord, one thousand eight hundred and nine and of the independence of the United States of America, the thirty third.

(hand signature) BY THE PRESIDENT A Smith Secretary of State. (Seal) City of Washington, To that: I DO HEREBY CERTIFY, That the foregoing Letters Patent, were delivered to me on the twenty eighth day of June in the year of our Lord, one thousand eight hundred and nine to be examined, that I have examined the same, and find them conformable to law. And I do hereby return the same to the Secretary of State, within fifteen days from the date aforesaid, to wit: - On this twenty eighth day of June - in the year aforesaid. Attorney general of the United States (signature by hand)

Last edit 4 months ago by jcole 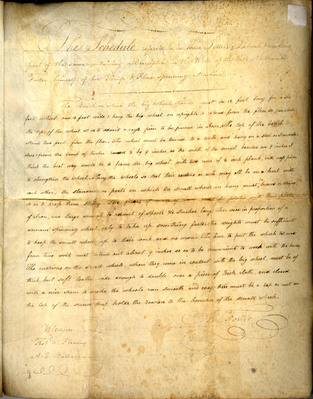 The Schedule referred to in these Letters Patent making part of the same containing a Description in the Words of the said Nathaniel Foster himself of his Hemp & Flax spinning Machine.

Last edit 5 months ago by MaryV 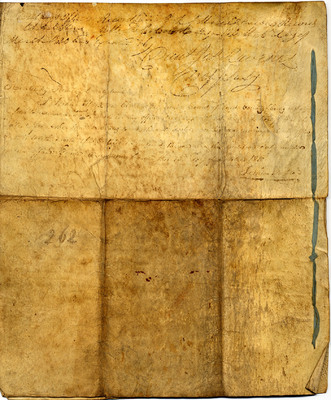 Last edit 4 months ago by jcole
Displaying all 3 pages