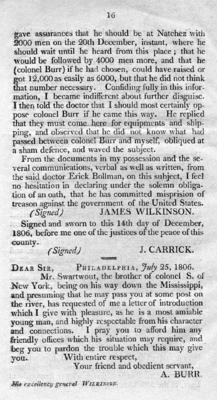 gave assurances that he should be at Natchez with 2000 men on the 20 December, instant, where he should wait until he heard from this place ; that he would be followed by 4000 men more, and that he (colonel Burr) if had chosen, could have raised or go 12,000 as easily as 6000, but that he did not think that number necessary. Confiding fully in this information, I became indifferent about further disguise. I then told the doctor that I should most certainly oppose colonel Burr if he came this way. He replied that they must come here for equipments and shipping, and observed that he did not know what had passed between colonel Burr and myself, obliqued at a sham defence, and waved the subject.

From the documents in my possession and the several communications, verbal as well as written, from the said doctor Erick Bollman, on this subject, I feel no hesitation in declaring under the solemn obligation of an oath, that he has committed misprision of treason against the government of the United States.

Signed and sworn to this 14th day of December, 1806, before me one of the justices of the peace of this county.

Mr. Swartwout, the brother of colonel S. of New York, being on his way down the Mississippi, and presuming that he may pass you at some post on the river, has requested of me a letter of introduction which I give with pleasure, as he is a most amiable young man, and highly respectable from his character and connections. I pray you to afford him any friendly offices which his situation my require, and beg you to pardon the trouble which this may give you. With entire respect, Your friend and obedient servant, A. BURR.