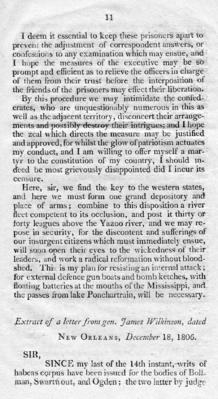 I deem it essential to keep these prisoners apart to prevent the adjustment of correspondent answers, or confessions to any examination which may ensue, and I hope the measures of the executive may be so prompt and efficient as to relieve the officers in charge of them from their trust before the interposition of the friends of the prisoners may effect their liberation.

By this procedure we may intimidate the confederates, who are unquestionably numerous in this as well as the adjacent territory, disconcert their arrangements and possibly destroy their intrigues; and I hope the zeal which directs the measure may be justified and approved, for whilst the glow of patriotism actuates my conduct, and I am willing to offer myself a martyr to the constitution of my country, I should indeed be most grievously disappointed did I incur its censure.

Here, sir, we find the key to the western states, and here we must form one grand depository and place of arms ; combine to this disposition a river fleet competent to its occupation, and post it thirty or forty leagues above the Yazoo river, and we may repose in security, for the discontent and sufferings of our insurgent citizens which must immediately ensue, will soon open their eyes to the wickedness of their leaders, and work a radical reformation without bloodshed. This is my plan for resisting an internal attack; for external defence gun boats and bomb ketches, with floating batteries at the mouths of the Mississippi, and the passes from lake Ponchartrain, will be necessary.

Extract of a letter from gen. James Wilkinson, dated

SINCE my last of the 14th instant, writs of habeas corpus have been issued for the bodies of Bollman, Swartwout, and Ogden ; the two latter by judge 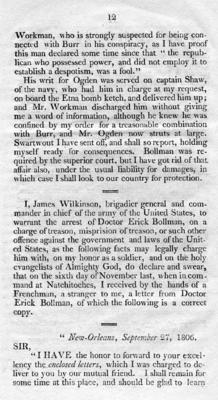 Workman, who is strongly suspected for being connected with Burr in his conspiracy, as I have proof his man declared some time since that "the republican who possessed power, and did not employ it to establish a despotism, was a fool."

His writ for Ogden was served on captain Shaw, of the navy, who had him in charge at my request, on board the Etna bomb ketch, and delivered him up; and Mr. Wokman discharged him without giving me a word of information, although he knew he was confined by my order for a treasonable combination with Burr, and Mr. Odgen now struts at large. Swartwout I have sent off, and shall so report, holding myself ready for consequences. Bollman was required by the superior court, but I have got rid of that affair also, under the usual liability for damages, in which case I shall look to our country for protection

I, James Wilkinson, brigadier general and commander in chief of the army of the United States, to warrant the arrest of Doctor Erick Bollman, on a charge of treason, misprision of treason, or such other offence against the government and laws of the United States, as the following facts may legally charge him with, on my honor as a soldier, and on the holy evangelists of Almighty God, do declare and swear, that on the sixth day of November last, when in command at Natchitoches, I received by the hands of a Frenchman, a stranger to me, a letter from Doctor Erick Bollman, of which the following is a correct copy.

"I HAVE the honor to forward to your escellency the enclosed letters, which I was charged to deliver to you by our mutual friend. I shall remain for some time at this place, and should be glad to learn

where and when I may have the pleasure of an interview with you. Have the goodness to inform me of it, and please to direct your letter to me, care of , or inclose it under cover to them. I have the honor to be, With great respect, Sir, Your Excellency's most obedient servant, (Signed) ERICK BOLLMAN.

Covering a communication in cypher from colonel Aaron Burr, of which the following is substantially as fair an interpretation as I have heretofore been able to make, the original of which I hold in my possession: " I (Aaron Burr) have obtained funds and have actually commenced the enterprize. Detachments from different points and under different pretences will rendezvous on the Ohio, 1st November. Every thing internal and external favors views; protection of England is secured. *T.–is gone to Jamaica to arrange with the admiral on that station, and will meet at the Mississippi––England––navy of United States are ready to join, and final orders are given to my friends and followers; it will be an host of choice spirits. Wilkinson shall be second to Burr only; Wilkinson shall dictate the rank and promotion of his officers. Burr will proceed westward 1st August, never to return ; with him go his daughter ; the husband will follow on October with a corps of worthies ; send forthwith an intelligent and confidential friend, with whom Burr may confer ; he shall return immediately with further interesting details : this is essential to concert and harmony of movement; send a list of all persons known to Wilkinson west of the mountains, who could be useful, with a note delineating their characters. 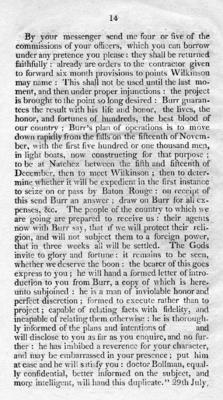 By your messenger send me four or five of the commissions of your officers, which you can borrow under any pretence you please : they shall be returned faithfully : already are orders to the contractor given to forward six month provisions to points Wilkinson may name : This shall not be used until the last moment, and then under proper injuctions : the project is brought to the point so long desired : Burr guarantees the result with his life and honor, the lives, the honor, and fortunes of hundred, the best blood of our country ; Burr's plan of operations is to move down rapidly from the falls on the fifteenth of November, with the first five hundred or one thousand men, in light boats, now constructing for that purpose ; to be at Natchez between the fifth and fifteenth of December, then to meet Wilkinson ; then to determine whether it will be expedient in the first instance to seize on or pass by Baton Rouge : on receipt of this send Burr an answer ; draw on Burr for all expenses, &c. The people of the country to which we are going are prepared to receive us : their agents now with Burr say, that if we will protect their religion, and will not subject them to a foreign power, that in three weeks all will be settled. The Gods invite to glory and fortune : it remains to be seen, whether we deserve the boon : the bearer of this goes express to you ; he will hand a formed letter of introduction to you from Burr, a copy of which is hereunto subjoined : he is a man of inviolable honor and perfect discretion ; formed to execute rather than to project ; capable of relating facts with fidelity, and incapable of relating them otherwise : he is thoroughly informed of the plans and intenstions of and will disclose to you as far as you enquire, and no further : he has imbibed a reverence for your character, and my be embarrassed in your presence ; put him at ease and he will satisfy you : doctor Bollman, equally confidential, better informed on the subject, and more intelligent, will hand this duplicate." 29th July, 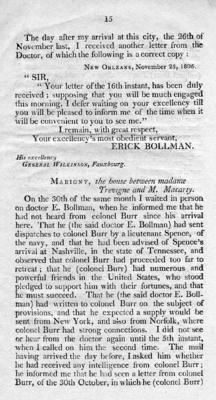 The day after my arrival at this city, the 26th of November last, I received another letter from the Doctor, of which the following is a correct copy :

"Your letter of the 16th instant, has been duly received ; supposing that you will be much engaged this morning, I defer waiting on you excellency till you will be pleased to inform me of the time when it will be convenient to you to see me." I remain, with great respect, Your excellency's most obedient servent, ERICK BOLLMAN.

On the 30th of the same month I waited in person on doctor E. Bollman, when he informed me that he had not heard from the colonel Burr since his arrival here. That he (the said doctor E. Bollman) had sent dispatches to colonel Burr by a lieutenant Spence, of the navy, and that he had been advised of Spence's arrival at Nashville, in the state of Tennessee, and observed that colonel Burr had proceeded too far to retreat ; that he (colonel Burr) had numerous and powerful friends in the United States, who stood pledged to support him with their fortunes, and that he must succeed. That he (the said doctor E. Bollman) had written to colonel Burr on the subject of provisions, and that he expected a supply would be send from New York, and also form Norfolk, where colonel Burr had strong connections. I did not see or hear from the doctor again until the 5th instant, when I called on him the second time. The mail having arrived the day before, I asked him whether he had received any intelligence from colong Burr ; he informed me that he had seen a letter from colonel Burr, of the 30th October, in which he (colonel Burr)