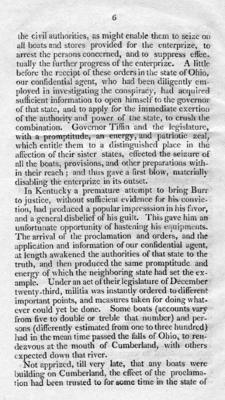 the civil authorities, as might enable them to seize on all boats and stores provided for the enterprize, to arrest the persons concerned, and to suppress effectually the further progress of the enterprize. A little before the receipt of these orders in the state of Ohio, our confidential agent, who had been diligently employed in investigating the conspiracy, had acquired sufficient information to open himself to the governor of that state, and to apply for the immediate exertion of the authority and power of the state, to crush the combination. Governor Tiffin and the legislature, with a promptitude, an energy, and patriotic zeal, which entitle them to a distinguished place in the affection of their sister states, effected the seizure of all the boats, provisions, and other preparations within their reach ; and thus gave a first blow, materially disabling the enterprize in its outset.

In Kentucky a premature attempt to bring Burr to justice, without sufficient evidence for his conviction, had produced a popular impression in his favor, and a general disbelief of his guilt. This gave him an unfortunate opportunity of hastening his equipments. The arrival of the proclamation and orders, and the application and informatin of our confidential agent, at length awakened the authorities of that state to the truth, and then produced the same promptitude and energy of which the neighboring state had set the example. Under an act of their legislature of December twenty-third, militia was instantly ordered to different important points, and measures taken for doing whatever could yet be done. Some boats (accounts vary from five to double or treble that number) and persons (differently estimated from one to three hundred) had in the mean time passed the falls of Ohio, to rendezvous at the mouth of Cumberland, with others expected down that river.

Not apprized, till very late, that any boats were building on Cumberland, the effect of the proclamation had been trusted to for some time in the stae of 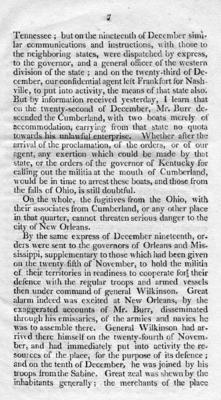 Tennessee ; but on the nineteenth of December similar communications and instructions with those to the neighboring states, were dispatched by express, to the governor, and a general officer of the western division of the state ; and on the twenty-third of December, our confidential agent left Frankfort for Nashville, to put into activity, the means of that state also. But by information received yesterday, I learn that on the twenty-second of December, Mr. Burr descended the Cumberland, with two boats merely of accomodation, carrying from that state no quota towards his unlawful enterprise. Whether after the arrival of the proclamation, of the orders, or of our agent, any exertion which could be made by that state, or the orders of the governor of Kentucky for calling our the militia at the mouth of Cumberland, would be in time to arrest these boats, and those from the falls of Ohio, is still doubtful.

On the whole, the fugitives from the Ohio, with their associates from Cumberland, or any other place in that quarter, cannot threaten serious danger to the city of New Orleans.

By the same express of December nineteenth, orders were sent to the governors of Orleans and Mississippi, supplementary to those which had been given on the twenty-fifth of November, to hold the militia of their territories in readiness to cooperate for their defence with the regular troops and armed vessels then under command of general Wilkinson. Great alarm indeed was excited at New Orleans, by the exaggerated accounts of Mr. Burr, desseminated throug his emissaries, of the armies and navies he was to assemble there. General Wilkinson had arrived there himself on the twenty-fourth of November, and had immediately put into activity the resources of the place, for the purpose of its defence ; and on the tenth of December, he was joined by his troops from the Sabine. Great zeal was shewn by the inhabitants generally ; the merchants of the place 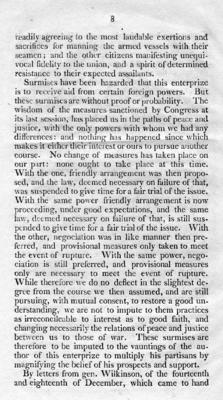 readily agreeing to the most laudable exertions and sacrifices for manning the armed vessels with their seamen ; and the other citizens manifesting unequivocal fidelity to the union, and a spirit of determined resistance to their expected assailants.

Surmises have been hazarded that this enterprize is to receive aid from certain foreign powers. But these surmises are without proof or probability. The wisdom of the measures sanctioned by Congress at its last session, has placed us in the paths of peace and justice, with the only powers with whom we had any differences : and nothing has happened since which makes it either their interest or ours to pursue another course. No change of measures has taken place on our part: none ought to take place at this time. With the one, friendly arrangement was then proposed, and the law, deemed necessary on failure of that, was suspended to give time for a fair trial of the issue. With the same power friendly arrangement is now proceeding, under good expectations, and the same law, deemed necessary on failure of that, is still suspended to give time for a fair trial of the issue. With the other, negotiation was in like manner then preferred, and provisional measures only taken to meet the event of rupture. With the same power, negociation is still preferred, and provisional measures only are necessary to meet the even to rupture. While therefore we do no deflect in the slightest degree from the course we then assumed, and are still pursuing, with mutual consent, to resore a good understanding, we are not to impute to them practices as irreconcileable to interest as to good faith, and changing necessarily the relations of peace and justice between us to those of war. These surmises are therefore to be imputed to the vauntings of the author of this enterprize to multiply his partisans by magnifying the belief of his prospects and support.

By letters from gen. Wilkinson, of the fourteenth and eighteenth of December, which came to hand 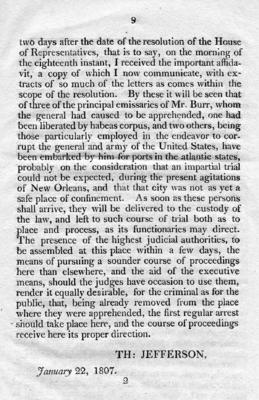 two days after the date of the resolution of the House of Representatives, that is to say, on the morning of the eighteenth instant, I received the important affidavit, a copy of which I now communicate, with extracts of so much of the letters as comes within the scope of the resolution. By these it will be seen that of three of the principal emissaries of Mr. Burr, whom the general had caused to be apprehended, one had been liberated by habeas corpus, and two others, being those particularly employed in the endeavor to corrupt the general and army of the United States, have been embarked by him for ports in the atlantic states, probably on the consideration that an impartial trial could not be expected, during the present agitations of New Orleans, and that that city was not as yet a safe place of confinement. As soon as these persons shall arrive, they will be delivered to the custody of the law, and left to such course of trial both as to place and process, as its functionaries may direct. The presence of the highest judicial authorities, to be assembled at this place with a few days, the means of pursuing a sounder course of proceedings here than elsewhere, and the aid of the executive means, should the judges have occasion to use them, render it equally desirable, for the criminal as for the public, that, being already remobed from the place where they were apprehended, the first regular arrest should take place here, and the course of proceedings receive here its proper direction 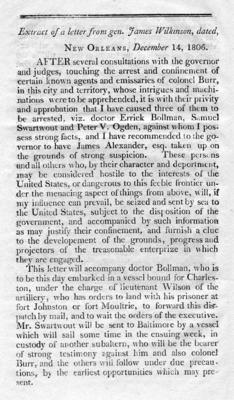 Extract of a letter from gen. James Wilkinson, dated,

AFTER several consultations with the governor and judges, touching the arrest and confinement of certain known agents and emissaries of colonel Burr, in this city and territory, whose intrigues and machinations were to be apprehended, it is with their privity and approbation that I have caused three of then to be arrested, viz. doctor Errick Bollman, Samuel Swartwout and Peter V. Ogden, against whom I possess strong facts, and I have recommended to the governor to have James Alexander, esq. taken up on the grounds of strong suspicion. These persons and all others who, by their character and deportment, may be considered hostile to the interests of the United States, or dangerous to this feeble frontier under the menacing aspect of things from above, will, if my influence can prevail, be seized and sent by sea to the United States, subject to the disposition of the government, and accompanied by such information as may justify their confinement, and furnish a clue to the development of the grounds, progress and projectors of the treasonable enterprize in which they are engaged

This letter will accompany doctor Bollman, who is to be this day embarked in a vessel bound for Charleston, under the charge of lieutenant Wilson of the artillery, who has orders to land with his prisoner at for Johnston or fort Moultrie, to forward this dispatch by mail, and to wait the orders of the executive. Mr. Swartwout will be sent to Baltimore by a vessel which will sail some time in the ensuing week, in custody of another subaltern, who will be the bearer of strong testimony against him and also colonel Burr, and the others will follow under due precautions, by the earliest opportunities which may present.