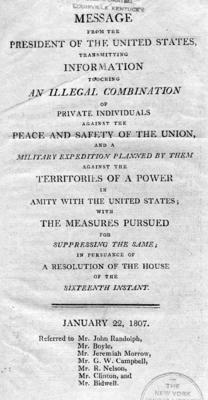 MESSAGE FROM THE PRESIDENT OF THE UNITED STATES, TRANSMITTING INFORMATION TOUCHING AN ILLEGAL COMBINATION OF PRIVATE INDIVIDUALS AGAINST THE PEACE AND SAFETY OF THE UNION, AND A MILITARY EXPEDITION PLANNED BY THEM AGAINST THE TERRITORIES OF A POWER IN AMITY WITH THE UNITED STATES; WITH THE MEASURES PURSUED FOR SUPPRESSING THE SAME; IN PURSUANCE OF A RESOLUTION OF THE HOUSE OF THE SIXTEENTH INSTANT.

Last edit about 2 months ago by jmphillips 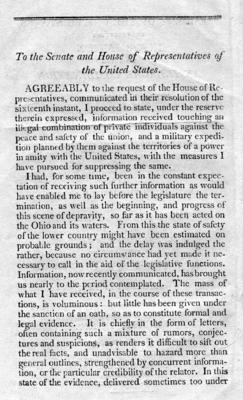 To the Senate and House of Representatives of the United States.

Agreeably to the request of the House of Representatives, communicated in their resolution of the sixteenth instant, I proceed to state, under the reserve therrein expressed, information received touching an illegal combination of private individuals against the peace and safety of the union, and a military expedition planned by them against the territories of a power in amity with the United States, with the measures I have pursued for suppressing the same.

I had, for some time, been in the constant expectation of receiving such further information as would have enabled me to lay before the legislature the termination, as well as the beginning, and progress of this scene of depravity, so far as it has been acted on the Ohio and its waters. From this the state of safety of the lower country might have been estimated on probable grounds; and the delay was indulged the rather, because no circumstance had yet made it necessary to call in the aid of the legislative functions. Information, now recently communicated, has brought us nearly to the period contemplated. The mass of what Ihave received, in the course of these transactions is voluminous: but little has been given under the sanction of an oath, so as to constitute formal and legal evidence. It is chiefly in the form of letters, often containing such a mixture of rumors, conjectures and suspicions, as renders it difficult to sift out the real facts, and unadvisable to hazard more than general outlines, strengthened by concurrent information, or the particular credibility of the relator. In this state of the evidence, delivered sometimes too under

Last edit about 2 months ago by jmphillips 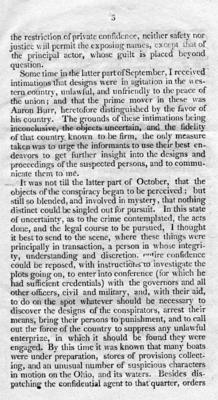 the restriction of private confidence, neither safety nor justice will permit the exposing names, except that of the principal actor, whose guilt is placed beyond question.

Some time in the latter part of September, I received intimations that designs were in agitation in the western country, unlawful, and unfriendly to the peace of the union ; and that the prime mover in these was Aaron Burr, heretofore distinguished by the favor of his country. The grounds of these intimations being inconclusive, the objects uncertain, and the fidelity of that country, known to be firm, the only measure taken was to urge the informants to use their best endeavors to get further insight into the designs and proceedings of the suspected person, and to communicate them to me.

It was not till the latter part of October, that the objects of the conspiracy began to be perceived ; but still so blended, and involved in mystery, that nothing distinct could be singled out for pursuit. In this state of uncertainty, as to the crime contemplated, the acts done, and the legal course to be pursued, I thought it best to send to the scene, where these things were principally in transaction, a person in whose integrity, understanding and discretion, entire confidence could be reposed, with instructions to investigate the plots going on, to enter into conference (for which he had sufficient credentials) with the governors and all other officers, civil and military, and, with their aid, to do on the spot whatever should be necessary to discover the designs of the conspirators, arrest their means, bring their persons to punishment, and to call out the force of the country to suppress any unlawful enterprize, in which it should be found they were engaged. By this time it was known that many boats were under preparation, stores of provisions collecting, and an unusual number of suspicious characters in motion on the Ohio, and its waters. Besides dispatching the confidential agent to that quarter, orders

Last edit about 1 month ago by tfbus 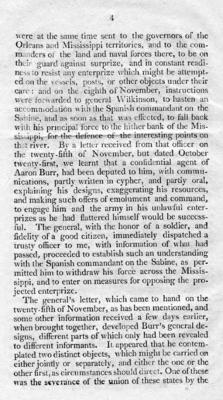 were at the same time sent to the governors of the Orleans and Mississippi territories, and to the commanders of the land and naval forces there, to be on their guard agains surprize, and in constant readiness to resist any enterprize which might be attempted on the vessels, posts, or other objects under their care : and on the eighth of November, instructions were forwarded to the general Wilkinson, to hasten an accomodation with the Spanish commandant on the Sabine, and as soon as that was effected, to fall back with his principal force to the hither bank of the Mississippi, for the defence of the interesting points on that river. By a letter received from that officer on the twenty-fifth of November, but dated October twenty-first, we learnt that a confidential agent of Aaron Burr, had been deputed to him, with communications, partly written in cypher, and partly oral, explaining his designs, exaggerating his resources, and making such offers of emolument and command, to engage him and the army in his unlawful enterprizes as he had flattered himself would be successful. The general, with the honor of a soldier, and fidelity of a good citizen, immediately dispatched a trusty officer to me, with information of what had passed, proceeded to establish such an understanding with the Spanish commandant on the Sabine, as permitted him to withdraw his force across the Mississippi, and to enter on measures for opposing the projected enterprize.

The general's letter, which came to hand on the twenty-fifth of November, as has been mentioned, and some other information received a few days earlier, when brought together, developed Burr's general designs, different parts of which only had been revealed to different informants. It appeared that he contemplated two distinct objects, which might be carried on either jointly or separately, and either the one or the other first, as circumstances should direct. One of these was the severance of the union of these states by the

Last edit about 1 month ago by tfbus 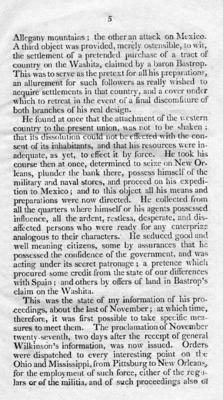 Allegany mountains ; the other an attack on Mexico. A third object was provided, merely ostensible, to wit, the settlement of a pretended purchase of a tract of country on the Washita, claimed by a baron Bastrop. This was to serve as the pretext for all his preparations, an allurement for such followers as really wished to acquire settlements in that country, and a cover under which to retreat in the event of a final discomfiture of both branches of his real design.

He found at once that the attachment of the western country to the present union, was not to be shaken ; that its dissolution could not be effected with the consent of its inhabitants, and that his resources were inadequate, as yet, to effect it by force. He took his course then at once, determined to seize on New Orleans, plunder the bank there, possess himself of the military and naval stores, and proceed on his expedition to Mexico; and to this object all his means and preparations were now directed. He collected from all the quarters where himself or his agents possessed influence, all the ardent, restless, desperate, and disaffected persons who were ready for an enerprize analagous to their characters. He seduced good and well meaning citizens, some by assurances that he possessed the confidence of the government, and was acting under its secret patronage ; a pretence which procured some credit from the state of our differences with Spain ; and others by offers of land in Bastrop's claim on the Washita.

This was the state of my information of his proceedings, about the last of November ; at which time, therefore, it was first possible to take specific measures to meet them. The proclamation of November twenty-seventh, two days after the receipt of general Wilkinson's information, was now issued. Orders were dispatched to every interesting point on the Ohio and Mississippi, from Pittsburgh to New Orleans, for the employment of such force, either of the regulars or of the militia, and of such proceedings also of