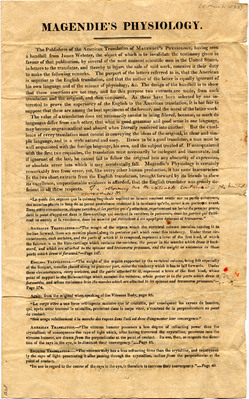 The Publishers of the American Translation of MAGENDIE'S PHYSIOLOGY, having seen a handbill from James Webster, the object of which is to invalidate the testimony given in favour of that publication, by several of the most eminent scientific men in the United States, in letters to the translator, and thereby to injure the sale of said work, conceive it their duty to make the following remarks. The purport of the letters referred to is, that the American is superior the the English translations, and that the author of the latter is equally ignorant of his own language and that of the science of physioloygy &c. The design of the handbill is to show that these assertions are not true, and for this purpose two exracts are made, from each translation and the original, and then compared. As these have been selected by one interested to prove the superiority of the English to the American, it is but fair to suppose that these are among the best specimens ofthe former, and the worst of the latter work. The value of the translation does not necessarily consist in being literal, because, so much do lanuages differ from each other, that what is good grammer and good sense in one language, may become ungrammatical and absurd when lierally renderedd into another.But the excellence of every translation must consist in conveying the ideas of the original, in clear and simple language, and in a style natural and easy. Hence to be good translator, a man must be well acquainted with the foreign lauguage, his own, and the subect treated of. If unacquainted with the first two requisites, the translqtion must necessarily and inaccurqte, and if ignorant of the last, he cannot fail to follow the originalinto and obscurity of expression, or absolute error into which it may accidenally fall. Magendie's Physiology is certainly remarkably free from error, yet, like every other human production, it has some inaccuracies. In the two short extracts from the English translation, brought forward by its friends to show its excellence, unquestionable evidence is afforded, that the English translator was grossly deficient in all these respects. The following are the extracts contained in the handbill above alluded to. "Le poide des organes que la colonne vertbrale soutient se faimsant sourtout sentir sur sa partie anterieure, dees muackes places le long de sa partie posterieure resistent a la tendance qu'elle aurait a se porteien avant. Dans cettecirconstnce, chque vertbre, et les qui s'y attachet, representent in lervier du premier genre, dont le poit d'appui est dans le fibro-cartilage qui soutient la vertere; la puissance, dans les parties qui l'attirent en avant; et la resistance, dans les muscles qui s'attachent a ses apophyses epineuese et transverese."

AMERICAN TRANSLATION.- "The weight of the organs which the vertebral column sustains, causing it to incline forward, there are muscles placed along its posterior part which resist this tendency. Under these circumstances, each vertebra, and part of whh it is composed, represent a lever of the first kind, of which the fulcrum is in the fibro-cartilage which sustains the vertebrq; the power in the muscles which draw it backward, and which are attched to the spinous and transverse processes, and the weight orresistance in those parts which draw it foward."-Page 147.

ENGLISH TRANSLATION.- "The weight if the organs supported by the vertebral column, being felt especially at the forepart, muscles placed along its posterior part, resist the ich it has to fall forwards. Under these circumstances, every vertebra, and the parts attached to it, represents a lever of the first kin, whose point of support is the fibro-cartilage which sustains the vertebra; whose powers is in the parts which draw it forwards; and whose resistance is in the muscles which are attached to its sponous and transverse processes."- Page 174

AMERICAN TRANSLATION.- "The vitreous humour possesses a less degree of refracting power than the crtstallin; of consequence the rays of light wgich, after having traversed the crystalline, penetrate into the vitreous humour, are drawn from the perpendicular at the point of contact. its used, then, as resects the direction of the rays in the eyes, is to diminish their covergency." .... Page 43.

ENGLISH TRANSLATION....."The vitreous body has a less refracting force than the crytalline, and consequently the rays of light penetrating it after passing through the crystalline, incline for the perpendicular at the point of contact. "its use in regard to the course of the rays in the eye, is therefore to increase their convergency.".....Page 40.

Last edit about 2 months ago by CandiMH 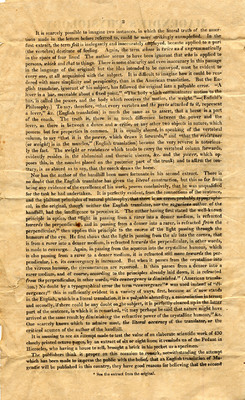 Is is scarcely possible to imagine two instances, in which the literal truth of the assertions made in the letters before referred to, could be more strikingly exemplefied. In the first extract, the term felt is inelegantly and inaccurately employed, because applied to a part (the vertebra) destitute of feeling. Again, the term whose is twice used ungrammatically in the space of four lines! The author seems to have been ignorant that who is applied to persons, which and that to things. There is some obscurity and even inaccuracy in this passage in the language of the original; but the idea intended to be conveyed, must be evident to every one, at all acquainted with the subject. It is difficult to imagine how it could be rendered with more simplicity and perspicuity, than in the American translation. But the English translator, ignorant of his subject, has followed the original into a palpable error. "A lever is a bar, moveable about a fixed point." "The body which communicateds motion to the bar, is called the power, and the body which receives the motion, the weight."--(Enfield's Philosophy.) To say, therefore, "that every vertebra and the parts attached to it, represent a lever," &c. (English translation) is much the same as to assert, that a horse is a part of the coach. The truth is, there is as much difference between the power and the lever, as there is between a dunce and a critic, or any other two objects in nature, which possess but few properties in common. It is equally absurd, in speaking of the vertebral column, to say "the it is the power, which draws it forwards," and "that the resistance (or weight) is in the muscles," (English translation) because the very reverse is norotiously the fact. The weight of resistance which tends to carry the vertebral column forwards, evidently resides in the abdominal and thoracic viscera, &c. and the power, which opposes this, in the muscles placed on the posterior part of the trunk; and to affirm the contrary, is as absurd as to say, that the coach draws the horse.

Nor has the author of the handbill been more fortunate in his second extract. There is no doubt that the English translator has given the literal construction, but this so far from being any evidence of the excellence of his work, proves conclusively, that he was unqualified for the task he had undertaken. It is perfectly evident, from the connections of the sentence, and the plainest principles of natural philosophy, that there is an error, probably typographical, in the original, though neither the English translator, nor the sagacious author of the handbill, had the intelligence to perceive it. The author having first stated the well-known principle in optics, that "light in passing from a rarer into a denser medium, is refracted towards the perpendicular, and in passing from a denser into a rarer, is refracted from the perpendicular," then applies this principle to the course of the light passing through the humours of the eye. He first shows that the light in passing from the air into the cornea, that is from a rarer into a denser medium, is refracted towards the perpendicular, in other words, is made to converge. Again, in passing from the aqueous into the crystalline humour, which is also passing from a rarer to a denser medium, it is refracted still more towards the perpendicular, i.e. its convergency is increased. 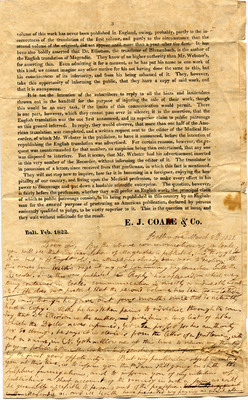 3 volume of this work has never been published in England, owing probably, partly to the incorrectness of the translation of the first volume, and partly to the circumstance that the second volume of the orginial, did not appear until more than a year after the first. It has been also boldly asserted that Dr. Elliotson, the translator of Blumenbach, is the author of the English translation of Magendie. They know of no higher authority than Mr. Webster's, for asserting this. Even admitting it for a moment, as he has put his name to one work of this kind, we cannot imagine any other motive for his not having done the same to this, but his consciousness of its inferiority, and from his being ashamed of it. They, however, take this opportunity of informing the public, that they have a copy of said work, and that is is anonymous. It is not the intention of the subscribers to reply to all the hints and innuendos thrown out in the handbill for the purpose of injuring the sale of their work, though this would be an easy task, if the limits of this communication would permit. There is one part, however, which they cannot pass over in silence; it is the assertion, that the English translation was the one first announced, and its superior claim to public patronage on this ground inferred. In reply, they would observe, that more than one half of the Ame- rican translation was completed, and a written request sent to the editor of the Medical Recorder, of which Mr. Webster is the publisher, to have it announced, before the intention of republishing the English translation was advertised. For certain reasons, however, the request was countermanded for that number, so no suspicion being then entertained, that any one was disposed to interfere. But it seems, that Mr. Webster had his adversitement inserted in this very number of the Recorder, without informing the editor of it. The translator is in possesion of a letter, since recevied from that gentleman, in which this fact is mentioned. They will not stop now to inquire, how far it is becoming in a foreigner, enjoying the hospitality of our country, and living upon the Medical profession, to make every effort in his power to discouraeg and put down a laudable scientific enterprise. The question, however, is fairly before the profession, whether they will prefer an English work, the principal claim of which to public patronage consists, in its being republished in this country by an Englishman for the avowed purpose of prostrating an American publication, declared by persons eminently qualified to judge, to be vastly superior to it. This is the question at issue, and they wait wihout solicitude for the result. E.J. Coale & Co. Balt. Feb. 1822. Baltimore March 5th 1822 Dear Sir, By the above communication of Mr. [illegible], you will see that my translation of Magendie is published, and although it is but a fortnight old, an attempt has already been made [illegible]. All this arises from Webster's rage out at my continuing my connection with the Recorder. 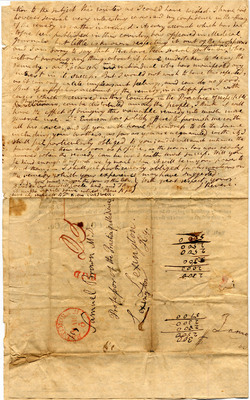 -tion to the subject this winter as I could have wished. I have had however several very interesting cases, and my confidence in the efficacy of the remedy is rather increased. As every account which has here -tofore been published in this country, has appeared in Medical Journals