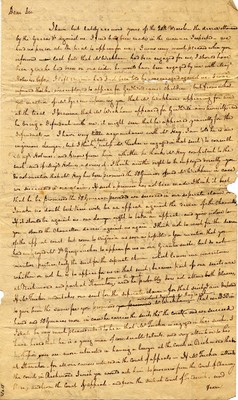 I have but lately received yours of the 20th March - the decree obtained by the Greens & against us I find has been made in the manner I expected - we had no person at the trial to appear for us ; I was very much pleased when you informed me last fall thatMr Wickham has been engaged for us, I should have been glad he had been on our side, he would have been engaged by me with Majs. Holmes, before I left Virginia had I not been told he was engaged against us - I was informed that he was employed to appear for Gen Williams' children, but from what you mention of Mr. Greens informing you that Mr Whickhams appearing for me at the trial. I presume that Mr Wickham appeared for Gen Williams himself and he being a Defendant with me. it will seem that he appeared generally for the Defendant, so I have very little acquaintance with Mr. Hay. I am told he is an ingenious Lawyer, but I think it best (unless Mr. Tucker is engaged in that suit) to consult Majs. Holmes, and know from him whether he think Mr Hay competent to the suit and if Majs. Holmes advises it. I think another ought to be employed directly - you do not mention if Mr Hay has been promised the 50 Guineas offered Mr. Wickham in case we succeeded in our claim. If such a promise has not been made I think it best that he be promised the 50 guineas - provided we succeed in our claim. I make no doubt but there will be an appeal against the decree of the Chancellor if it should be against us - our own lawyer ought to take our appeal - and give notice for you - should the Chancellor decree against us again - I think not to wait for the decree of the appeal court but come to Virginia as soon as possible. You mention that you had employed Mr [unclear] George Tucker to appear for us in our granted suits but do not mention particularly the suit for the separate claim, which leaves me uncertain whether or not he is to appear for us in that suit; because part of our suits are at Richmond and part at Staunton, ^ a [unclear] in [unclear] and he probably does not attend both places. If Mr Tucker undertakes our suit for the separate claim - for that suit I am disposed to give him the same fee you promised Mr Whickham and which I expect Mr Hay to get - that is $30 in hand and 50 guineas more in case he carries the suits then the court and we succeed. I shall be very much pleased indeed to hear that Mr Tucker is engaged in this suit. I have heard that he is a young man of considerable talents, and very attentive to his profession. We are more interested in having a lawyer at the court in Richmond than at Staunton - for all our causes will end in the court of appeals If Mr Tucker attends the courts in Richmond. I wish you would ask him to procures from the court of Chancery there, and from the Court of appeals - and from the District Court of [unclear], and from

Last edit 2 months ago by michelleRenee 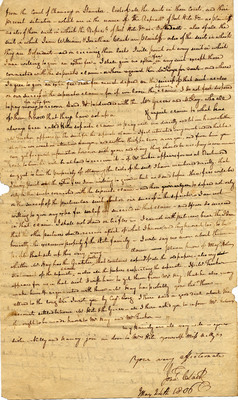 from the Court of Chancery in Staunton - lest of all the suits in those Courts - and these present situation - which are in the name of the Representative of Joel Hite [unclear] as plaintiffs as also of those suits in which the represes. of Joel Hite &c. are Defendants - also of all the suits in which James Williams & Jonathan Clark are plaintiffs - also of the suits in which they are Defendants - and on receiving these tasks I will point out every suit in which I am willing to give an extra fee. I shall give no extra ^fee in any suit except those connected with the seperate claim. or those against the [unclear] for [unclear] - and where I agree to give an extra fee. That fee must depend on the success of that suit - as also on our success in the seperate claim - for if we loose the ^seperate claim, I do not feel disposed to pay money ^for extra fee, to recover S and H to be divided with the Mrs Greens and McKay - who all of them know that they have set up a & unjust claim to what has always been called Hites separate claim. Pray write me directly an let me know whether Mr Tucker appears in the suit for the seperate claim. I feel interested very much indeed that he should. We want an attentive lawyer, and another thing, he lives near you, and from him you can get frequent information how our suits go on, and if any thing should be necessary to communi cate to him, he will be at hand to receive it. If Mr Tucker appears for us at Richmond, suggest to him the propriety of obtaining the lists of the suits. I have mentioned directly that I may point out the extra fees I am willing to give - but as I said before, these fees will be on the suits connected with the seperate claim- and those to depend not only on the success of the particular suit, but on our success in the seperate. I am not willing to give any extra fee unless we succeed in that claim - and if we do succeed in that claim, I shall not stand on trifles. I cannot with patience bear the idea that the other parties should receive apart of what I know (and they know it too) to be honestly- the exclusive property of the Hite family. I will say nor more about them be open that sets up this very very ----- claim - please know of Maj. Holmes whether Mr Hay has the the [unclear] book that contains copies of all the old papers - also my statement of the separate ^ claim is also all the papers repecting the seperate claim. If Mr Tucker appears for us in that suit I wish him to get them from Mr Hay, that he also may make himself acquainted with them. Mr Hay has probably gone through these. attend to the long [Sta.?] I wrote you by Capt. Long. I there said a good deal about the accounts settled between Mr Hite & the Greens - all I there asked you to inform Mr Holmes of ought to be made known to Mr Hay and Mr Tucker - My family are all very well - your sister Nelly and Nancy join in love to Mrs Hite, yourself Miss Nelly &c.

Last edit 18 days ago by MaryV
Displaying all 2 pages