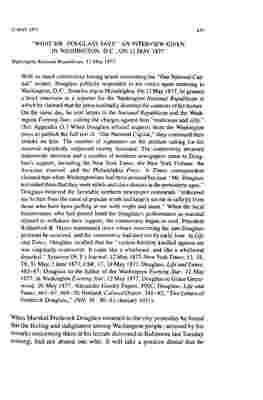 With so much controversy having arisen concerning his “Our National Capital” lecture, Douglass publicly responded to his critics upon returning to Washington, D.C., from his trip to Philadelphia. On 12 May 1877, he granted a brief interview to a reporter for the Washington National Republican in which he claimed that the press had badly distorted the contents of his lecture. On the same day, he sent letters to the National Republican and the Washington Evening Star, calling the charges against him “malicious and silly.” (See Appendix D.) When Douglass refused requests from the Washington press to publish the full text of “Our National Capital,” they continued their attacks on him. The number of signatures on the petition calling for his removal reportedly surpassed twenty thousand. The controversy attracted nationwide attention and a number of northern newspapers came to Douglass’s support, including the New York Times, the New York Tribune, the Syracuse Journal, and the Philadelphia Press. A Times correspondent claimed that white Washingtonians had been aroused because “Mr. Douglass reminded them that they were rebels and slave dealers in the prehistoric ages.” Douglass believed the favorable northern newspaper comments “redeemed my lecture from the curse of popular wrath and largely set me in saf[e]ty from those who have been puffing at me with might and main.” When the local businessmen who had posted bond for Douglass’s performance as marshal refused to withdraw their support, the controversy began to cool. President Rutherford B. Hayes maintained strict silence concerning the anti-Douglass petitions he received, and the controversy had died out by early June. In Life and Times, Douglass recalled that the “violent hostility kindled against me was singularly evanescent. It came like a whirlwind, and like a whirlwind departed.” Syracuse (N.Y.) Journal, 12 May 1877; New York Times, 13, 18, 19, 31 May, 1 June 1877; ChR, 17, 24 May 1877; Douglass, Life and Times, 463—67; Douglass to the Editor of the Washington Evening Star, 12 May 1877, in Washington Evening Star, 12 May 1877; Douglass to Grace Greenwood, 20 May 1877, Alexander Gumby Papers, NNC; Douglass, Life and Times, 463—67, 469—70; Holland, Colored Orator, 341—42; “Two Letters of Frederick Douglass,” JNH, 36 : 80—83 (January 1951).

When Marshal Frederick Douglass returned to the city yesterday he found that the feeling and indignation among Washington people, aroused by his remarks concerning them in his lecture delivered in Baltimore last Tuesday evening, had not abated one whit. It will take a positive denial that he

Last edit about 2 years ago by Jannyp 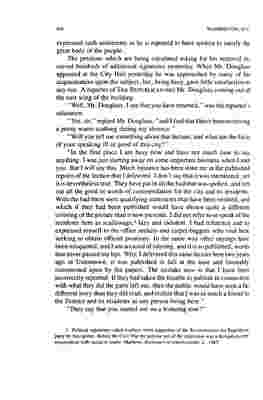 expressed such sentiments as he is reported to have spoken to satisfy the great body of the people.

The petitions which are being circulated asking for his removal received hundreds of additional signatures yesterday. When Mr. Douglass appeared at the City Hall yesterday he was approached by many of his acquaintances upon the subject, but, being busy, gave little satisfaction to any one. A reporter of THE REPUBLICAN met Mr. Douglass coming out of the east wing of the building.

“Well, Mr. Douglass, I see that you have returned,” was the reporter’s salutation.

“Yes, sir,” replied Mr. Douglass; “and I find that I have been receiving a pretty warm scathing during my absence.”

“Will you tell me something about that lecture, and what are the facts of your speaking ill or good of this city?”

“In the first place I am busy now and have not much time to say anything. I was just starting away on some important business when I met you. But I will say this. Much injustice has been done me in the published reports of the lecture that I delivered. I don’t say that it was intentional, yet it is nevertheless true. They have put in all the bad that was spoken, and left out all the good or words of commendation for the city and its residents. With the bad there were qualifying statements that have been omitted, and which if they had been published would have shown quite a different coloring of the picture than it now presents. I did not refer to or speak of the residents here as scallawags, ^1^ lazy and indolent. I had reference and so expressed myself to the office seekers and carpet-baggers who visit here seeking to obtain official positions. In the same way other sayings have been misquoted, and I am accused of uttering, and it is so published, words that never passed my lips. Why, I delivered this same lecture here two years ago in Uniontown: it was published in full at the time and favorably commented upon by the papers. The mistake now is that I have been incorrectly reported. If they had taken the trouble to publish in connection with what they did the parts left out, then the public would have seen a far different story than they did read, and realize that I was as much a friend to the District and its residents as any person living here.”

“They say that you started out on a lecturing tour?”

1. Political opponents called southern white supporters of the Reconstruction-era Republican party by this epithet. Before the Civil War the popular use of the expression was a derogatory term synonymous with rascal or loafer. Mathews, Dictionary of Americanisms, 2 : 1465.

Last edit about 2 years ago by Jannyp 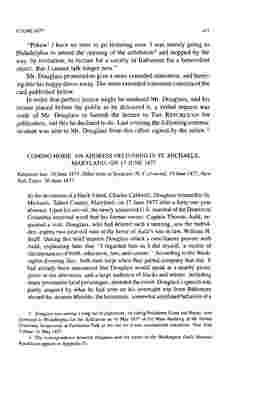 “Pshaw! I have no time to go lecturing now. I was merely going to Philadelphia to attend the opening of the exhibition ^2^ and stopped by the way, by invitation, to lecture for a society in Baltimore for a benevolent object. But I cannot talk longer now.”

In order that perfect justice might be rendered Mr. Douglass, and his lecture placed before the public as he delivered it, a verbal request was made of Mr. Douglass to furnish the lecture to THE REPUBLICAN for publication, but this he declined to do. Last evening the following communication was sent to Mr. Douglass from this ofﬁce signed by the editor. ^3^

At the invitation of a black friend, Charles Caldwell, Douglass returned to St. Michaels, Talbot County, Maryland, on 17 June 1877 after a forty-one-year absence. Upon his arrival, the newly appointed U.S. marshal of the District of Columbia received word that his former owner, Captain Thomas Auld, requested a visit. Douglass, who had desired such a meeting, saw the bedridden, eighty-two-year-old man at the home of Auld’s son-in-law, William H. Bruff. During this brief reunion Douglass struck a conciliatory posture with Auld, explaining later that “I regarded him as I did myself, a victim of circumstances of birth, education, law, and custom.” According to the Washington Evening Star, both men wept when they parted company that day. It had already been announced that Douglass would speak at a nearby picnic grove in the afternoon, and a large audience of blacks and whites, including many prominent local personages, attended the event. Douglass’s speech was partly inspired by what he had seen on his overnight trip from Baltimore aboard the steamer Matilda: the boisterous, somewhat unreﬁned behavior of a

2. Douglass was among a long list of dignitaries, including Presidents Grant and Hayes, who journeyed to Philadelphia for the dedication on 10 May 1877 of the Main Building of the former Centennial fairgrounds at Fairmount Park as the site for a new international exhibition. New York Tribune. 11 May 1877.

3. The correspondence between Douglass and the editor of the Washington Daily National Republican appears in Appendix D.