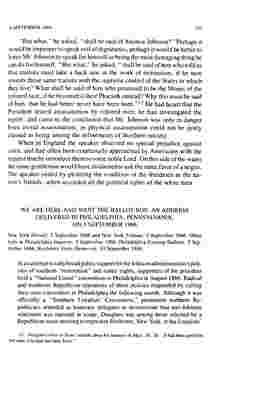 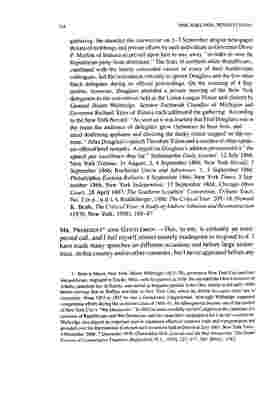 gathering. He attended the convention on 3-7 September despite newspaper threats of mobbings and private efforts by such individuals as Governor Oliver P. Morton of Indiana to prevail upon him to stay away “in order to save the Republican party from detriment.” The fears of northern white Republicans, combined with the barely concealed racism of many of their border-state colleagues, led the convention virtually to ignore Douglass and the few other black delegates during its official proceedings. On the morning of 4 September, however, Douglass attended a private meeting of the New York delegation to the convention held at the Union League House and chaired by General Hiram Walbridge. Senator Zachariah Chandler of Michigan and Governor Richard Yates of Illinois each addressed the gathering. According to the New York Herald, “As soon as it was learned that Fred Douglass was in the room the audience of delegates grew clamorous to hear him, and . . . amid deafening applause and cheering the dusky orator stepped on the rostrum.” After Douglass’s speech Theodore Tilton and a number of other speakers offered brief remarks. A report on Douglass’s address pronounced it “the speech par excellence thus far.” Indianapolis Daily Journal, 12 July 1866: New York Tribune, 31 August, 3, 4 September 1866; New York Herald, 3 September 1866; Rochester Union and Advertiser, 1, 5 September 1866: Philadelphia Evening Bulletin, 4 September 1866; New York Times, 5 September 1866; New York Independent, 13 September 1866; Chicago Open Court, 28 April 1867; The Southern Loyalists’ Convention, Tribune Tracts No. 2 (n.p. , n.d.), 4; Riddleberger, 1866: The Critical Year, 205-16; Howard K. Beale, The Critical Year: A Study of Andrew Johnson and Reconstruction (1930; New York, 1958), 184-87.

MR. PRESIDENT¹ AND GENTLEMEN:—This, to me, is certainly an unexpected call, and I feel myself almost entirely inadequate to respond to it. I have made many speeches on different occasions and before large assemblies, in this country and in other countries, but I never appeared before any

1. Born in Ithaca, New York, Hiram Walbridge (1821-70), prominent New York City merchant and politician, migrated to Toledo, Ohio, with his parents in 1836. He attended the Ohio University at Athens, practiced law in Toledo, and served as brigadier general in the Ohio militia in the early 1840s before moving ﬁrst to Buffalo and then to New York City, where he shifted his career from law to commerce. From 1853 to 1855 he was a Democratic congressman. Although Walbridge supported compromise efforts during the secession crisis of 1860-61, he subsequently became one of the leaders of New York City‘s “War Democrats." In 1862 he unsuccessfully ran for Congress as the candidate of a coalition of Republicans and War Democrats and two years later campaigned for Lincoln's reelection. Walbridge also played an important part in organized efforts to improve trade and transportation and presided over the International Commercial Convention held in Detroit in July 1865. New York Times, 4 November 1866, 7 December 1870; Christopher Dell, Lincoln and the War Democrats: The Grand Erosion of Conservative Tradition (Rutherford, N.J., 1975), 127, 177, 303; BDAC, 1762. 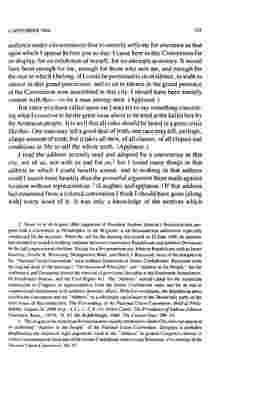 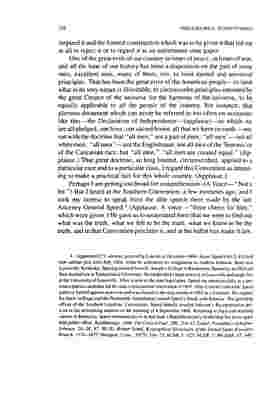 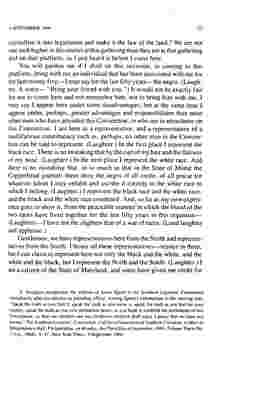