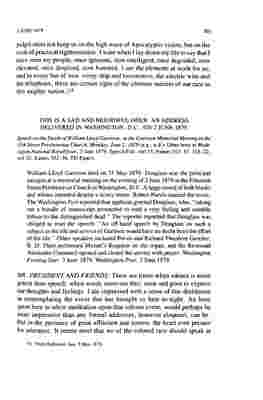 pulpit must not keep us on the high wave of Apocalyptic vision, but on the rock of practical righteousness. I want when I lay down my life to say that I have seen my people, once ignorant, now intelligent; once degraded, now elevated; once despised, now honored. I see the elements at work for us, and in every bar of iron, every ship and locomotive, the electric wire and the telephone, there are certain signs of the ultimate success of our race in this mighty nation.)16

THIS IS A SAD AND MOURNFUL HOUR: AN ADDRESS DELIVERED IN WASHINGTON, DC, ON 2 JUNE 1879

William Lloyd Garrison died on 23 May 1879. Douglass was the principal eulogist at a memorial meeting on the evening of 2 June 1879 at the Fifteenth Street Presbyterian Church in Washington, DC. A large crowd of both blacks and whites attended despite a heavy storm. Robert Purvis chaired the event. The Washington Post reported that applause greeted Douglass, who, “taking out a bundle of manuscript proceeded to read a very feeling and suitable tribute to the distinguished dead.” The reporter regretted that Douglass was obliged to read the speech: “An off-hand speech by Douglass on such a subject as the life and service of Garrison would have no doubt been the effort of his life.” Other speakers included Purvis and Richard Theodore Greener. B. D. Fleet performed Mozart’s Requiem on the organ, and the Reverend Alexander Crummell opened and closed the service with prayer. Washington Evening Star, 3 June 1879; Washington Post, 3 June 1879.

MR. PRESIDENT AND FRIENDS: There are times when silence is more potent than speech; when words seem too thin, tame and poor to express our thoughts and feelings. I am impressed with a sense of this destitution in contemplating the event that has brought us here to—night. An hour spent here in silent meditation upon that solemn event, would perhaps be more impressive than any formal addresses, however eloquent, can be. But in the presence of great affliction and sorrow, the heart ever presses for utterance. It seems meet that we of the colored race should speak at 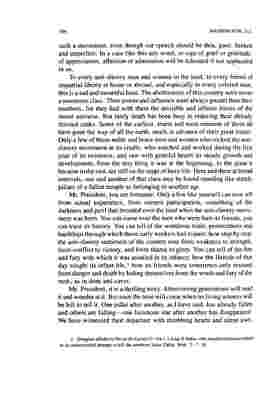 such a movement, even though our speech should be thin, poor, broken and imperfect. In a case like this any word, or sign of grief or gratitude, of appreciation, affection or admiration will be tolerated if not applauded in us.

To every anti-slavery man and woman in the land, to every friend of impartial liberty at home or abroad, and especially to every colored man, this is a sad and mournful hour. The abolitionists of this country were never a numerous class. Their power and inﬂuence were always greater than their numbers, for they had with them the invisible and inﬁnite forces of the moral universe. But lately death has been busy in reducing their already thinned ranks. Some of the earliest, truest and most eminent of them all have gone the way of all the earth, much in advance of their great leader. Only a few of those noble and brave men and women who rocked the antislavery movement in its cradle, who watched and worked during the ﬁrst year of its existence, and saw with grateful hearts its steady growth and development, from the tiny thing it was at the beginning, to the giant it became in the end, are still on the stage of busy life. Here and there at broad intervals, one and another of that class may be found standing like stately pillars of a fallen temple as belonging to another age.

Mr. President, you are fortunate. Only a few like yourself can now tell from actual experience, from earnest participation, something of the darkness and peril that brooded over the land when the anti-slavery movement was born. You can name over the men who were then its friends, you can trace its history. You can tell of the wondrous trials, persecutions and hardships through which those early workers had to pass; how step by step, the anti-slavery sentiment of the country rose from weakness to strength, from conflict to victory, and from shame to glory. You can tell of the ﬁre and fury with which it was assailed in its infancy, how the Herods of that day sought its infant life,1 how its friends were sometimes only rescued from danger and death by hiding themselves from the wrath and fury of the mob, as in dens and caves.

Mr. President, it is a thrilling story. Aftercoming generations will read it and wonder at it. But soon the time will come when no living witness will be left to tell it. One pillar after another, as I have said, has already fallen and others are falling—one luminous star after another has disappeared. We have witnessed their departure with throbbing hearts and silent awe.

l. Douglass alludes to Herod the Great (37—4 B.C.), king ofJudea, who slaughtered many infants in an unsuccessful attempt to kill the newborn Jesus Christ. Matt. 2 : 1—18. 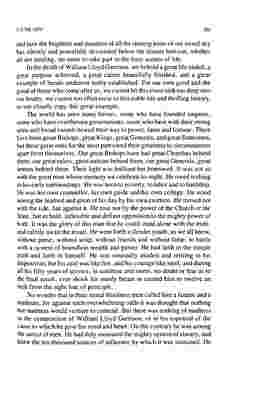 and now the brightest and steadiest of all the shining hosts of our moral sky has silently and peacefully descended below the distant horizon, whither all are tending, no more to take part in the busy scenes of life.

In the death of William Lloyd Garrison, we behold a great life ended, a great purpose achieved, a great career beautifully ﬁnished, and a great example of heroic endeavor nobly established. For our own good and the good of those who come after us, we cannot let this event sink too deep into our hearts, we cannot too often recur to this noble life and thrilling history, or too closely copy this great example.

The world has seen many heroes, some who have founded empires, some who have overthrown governments, some who have with their strong arms and broad swords hewed their way to power, fame and fortune. There have been great BishOps, great Kings, great Generals, and great Statesmen; but these great ones for the most part owed their greatness to circumstances apart from themselves. Our great Bishops have had great Churches behind them, our great rulers, great nations behind them, our great Generals, great armies behind them. Their light was brilliant but borrowed. It was not so with the great man whose memory we celebrate to-night. He owed nothing to his early surroundings. He was born to poverty, to labor and to hardship. He was his own counsellor, his own guide and his own college. He stood among the learned and great of his day by his own exertion. He moved not with the tide, but against it. He rose not by the power of the Church or the State, but in bold, inflexible and deﬁant opposition to the mighty power of both. It was the glory of this man that he could stand alone with the truth, and calmly await the result. He went forth a slender youth, as we all know, without purse, without scrip, without friends and without fame, to battle with a system of boundless wealth and power. He had faith in the simple truth and faith in himself. He was unusually modest and retiring in his disposition; but his zeal was like fire, and his courage like steel, and during all his fifty years of service, in sunshine and storm, no doubt or fear as to the final result, ever shook his manly breast or caused him to swerve an inch from the right line of principle.

No wonder that in their moral blindness men called him a fanatic and a madman, for against such overwhelming odds it was thought that nothing but madness would venture to contend. But there was nothing of madness in the composition of William Lloyd Gam'son, or in his espousal of the cause to which he gave his mind and heart. On the contrary he was among the sanest of men. He had duly measured the mighty system of slavery, and knew the ten thousand sources of influence by which it was sustained. He 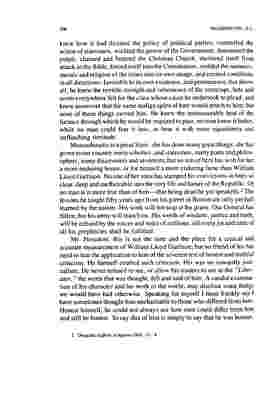 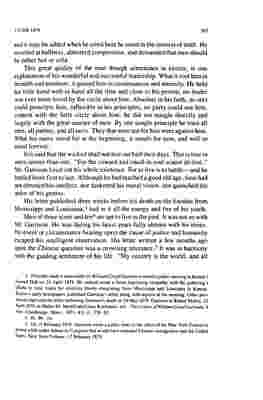