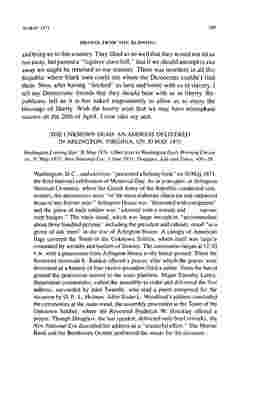 BRANDS FROM THE BURNING,

and bring us to this country. They liked us so well that they would not let us run away, but passed a “fugitive slave bill,” that if we should attempt to run away we might be returned to our masters. There was nowhere in all this Republic where black men could run where the Democrats couldn’t find them. Now, after having “fetched” us here and borne with us in slavery, I tell my Democratic friends that they should bear with us in liberty. Republicans tell us it is but naked magnanimity to allow us to enjoy the blessings of liberty. With the hearty wish that we may have triumphant success on the 20th of April, 1 now take my seat.

THE UNKNOWN DEAD: AN ADDRESS DELIVERED IN ARLINGTON, VIRGINIA, ON 30 MAY 1871

Washington, DC, and environs “presented a holiday look” on 30 May 1871, the third national celebration of Memorial Day. As in years past, at Arlington National Cemetery, where the Grand Army of the Republic conducted ceremonies, the decorations were “of the most elaborate character and surpassed those of any former year.” Arlington House was “festooned with evergreens” and the grave of each soldier was “adorned with a wreath and . . . various corp badges.” The main stand, which was large enough to “accommodate about three hundred persons” including the president and cabinet, stood “in a grove of oak trees” in the rear of Arlington House. A canopy of American flags covered the Tomb of the Unknown Soldier, which itself was largely concealed by wreaths and baskets of ﬂowers. The ceremonies began at 12:30 P.M. with a procession from Arlington House to the burial ground. There the Reverend Jeremiah E. Rankin offered a prayer, after which the graves were decorated as a battery of four twelve-pounders fired a salute. From the burial ground the procession moved to the main platform. Major Timothy Lubey, department commander, called the assembly to order and delivered the first address, succeeded by John Tweedle, who read a poem composed for the occasion by O. E. L. Holmes. After Stuart L. Woodford’s address concluded the ceremonies at the main stand, the assembly proceeded to the Tomb of the Unknown Soldier, where the Reverend Frederick W. Hinckley offered a prayer. Though Douglass, the last speaker, delivered only brief remarks, the New National Era described his address as a “masterful effort.” The Marine Band and the Beethoven Octette performed the music for the occasion. 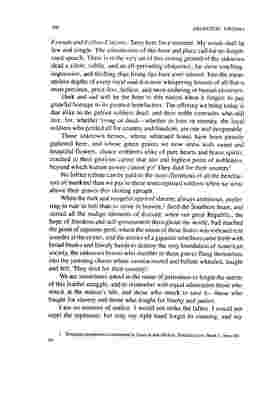 Friends and Fellow-Citizens: Tarry here for a moment. My words shall be few and simple. The solemn rites of this hour and place call for no lengthened speech. There is in the very air of this resting ground of the unknown dead a silent, subtle, and an all-pervading eloquence, far more touching, impressive, and thrilling than living lips have ever uttered. Into the measureless depths of every loyal soul it is now whispering lessons of all that is most precious, price-less, holiest, and most enduring in human existence.

Dark and sad will be the hour to this nation when it forgets to pay grateful homage to its greatest benefactors. The offering we bring today is due alike to the patriot soldiers dead, and their noble comrades who still live, for, whether living or dead—whether in time or eternity, the loyal soldiers who periled all for country and freedom, are one and inseparable.

Those unknown heroes, whose whitened bones have been piously gathered here, and whose green graves we now strew with sweet and beautiful ﬂowers, choice emblems alike of pure hearts and brave spirits, reached in their glorious career that last and highest point of nobleness, beyond which human power cannot go! They died for their country!

No loftier tribute can be paid to the most illustrious of all the benefactors of mankind than we pay to these unrecognized soldiers when we write above their graves this shining epitaph.

When the dark and vengeful spirit of slavery, always ambitious, preferring to rule in hell than to serve in heaven,1 fired the Southern heart, and stirred all the malign elements of discord; when our great Republic, the hope of freedom and self-government throughout the world, had reached the point of supreme peril; where the union of these States was torn and rent asunder at the center, and the armies of a gigantic rebellion came forth with broad blades and bloody hands to destroy the very foundation of American society, the unknown braves who slumber in these graves ﬂung themselves into the yawning chasm where cannon roared and bullets whistled, fought and fell. They died for their country!

I am no minister of malice. I would not strike the fallen. I would not repel the repentant, but may my right hand forget its cunning, and my 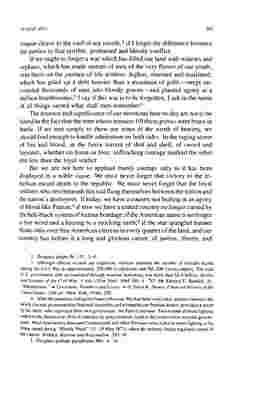 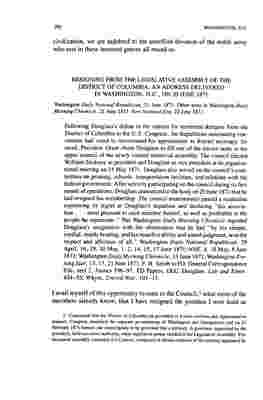