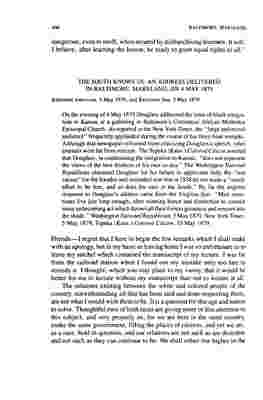 dangerous, even to itself, when secured by disfranchising freemen. It will, I believe, after learning the lesson, be ready to grant equal rights to all.”

THE SOUTH KNOWS US: AN ADDRESS DELIVERED IN BALTIMORE, MARYLAND, ON 4 MAY 1879

On the evening of 4 May 1879 Douglass addressed the issue of black emigration to Kansas at a gathering in Baltimore’s Centennial African Methodist Episcopal Church. As reported in the New York Times, the “large and mixed audience” frequently applauded during the course of his three-hour remarks. Although that newspaper refrained from criticizing Douglass’s speech, other journals were far from reticent. The Topeka (Kans.) Colored Citizen asserted that Douglass, in condemning the emigration to Kansas, “does not represent the views of the best thinkers of his race to-day.” The Washington National Republican chastised Douglass for his failure to appreciate fully the “real causes” for the Exodus and reminded him that in 1838 he too made a “manly effort to be free, and so does his race in the South.” By far the angriest response to Douglass’s address came from the Virginia Star: “Men sometimes live just long enough, after winning honor and distinction to commit some unbecoming act which throws all their former greatness and renown into the shade.” Washington National Republican, 5 May 1879; New York Times, 5 May 1879; Topeka (Kans.) Colored Citizen, 10 May 1879.

Friends—I regret that I have to begin the few remarks which I shall make with an apology, but in my haste in leaving home I was so unfortunate as to leave my satchel which contained the manuscript of my lecture. I was far from the railroad station when I found out my mistake only too late to remedy it. I thought, which you may place to my vanity, that it would be better for me to lecture without my manuscript than not to lecture at all.

The relations existing between the white and colored people of the country, notwithstanding all that has been said and done respecting them, are not what I would wish them to be. It is a question for this age and nation to solve. Thoughtful men of both races are giving more or less attention to this subject, and very properly so, for we are here in the same country, under the same government, filling the places of citizens, and yet we are, as a race, held in question, and our relations are not such as are desirable and not such as they can continue to be. We shall either rise higher in the 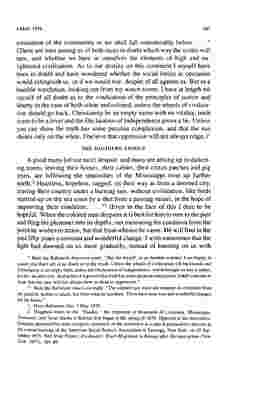 estimation of the community or we shall fall considerably below . . . † (There are men among us of both races in doubt which way the scales will turn, and whether we have in ourselves the elements of high and enlightened civilization. As to our destiny on this continent I myself have been in doubt and have wondered whether the social forces in operation would extinguish us, or if we would rise, despite of all against us. But as a humble watchman, looking out from my watch-tower, l have at length rid myself of all doubt as to the vindication of the principles of justice and liberty in the case of both white and colored, unless the wheels of civilization should go back, Christianity be an empty name with no vitality, truth cease to be a lever and the Declaration of Independence prove a lie. Unless you can show the truth has some peculiar complexion, and that the sun shines only on the white, I believe that oppression will not always reign.)¹

A good many [of our race] despair, and many are arising up in darkening trains, leaving their homes, their cabins, their cotton patches and pig styes, are following the sinuosities of the Mississippi river up further north.² Heartless, hopeless, ragged, on their way as from a doomed city, leaving their country under a burning sun, without civilization, like birds startled up on the sea coast by a shot from a passing vessel, in the hope of improving their condition. . . .† † (Even in the face of this I dare to be hopeful. When the colored man despairs it is best for him to turn to the past and ﬂing his plummet into its depths, not measuring his condition from the point he wishes to attain, but that from whence he came. He will ﬁnd in the past fifty years a constant and wonderful change. I wish sometimes that the light had dawned on us more gradually, instead of bursting on us with

† Here the Baltimore American reads: “But for myself, as an humble watcher, I am happy to assure you that I am in no doubt as to the result. Unless the wheels of civilization roll backwards and Christianity is an empty form; unless the Declaration of Independence, which brought us into a nation, is a lie, we shall rise. And unless it is proven that truth has some peculiar complexion, I shall continue to hope that my race will not always bow its head in oppression."

† † Here the Baltimore American reads: “The colored race must not measure its condition from the point he wishes to attain, but from what he has been. There have been vast and wonderful changes for the better."

2. Douglass refers to the “Exodus,” the migration of thousands of Louisiana, Mississippi, Tennessee, and Texas blacks to Kansas that began in the spring of 1879. Opposed to the movement, Douglass presented his most complete statement on the movement in a speech prepared for delivery at the annual meeting of the American Social Science Association in Saratoga, New York, on 12 September 1879. Nell Irvin Painter, Exodusters: Black Migration to Kansas after Reconstruction (New York, 1977), 184-85. 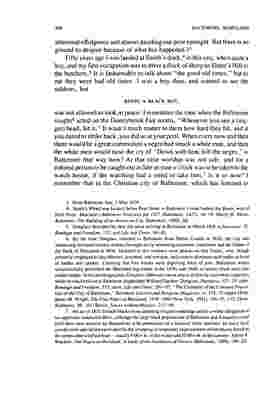 abnormal effulgence and almost dazzling our poor eyesight. But there is no ground to despair because of what has happened.)³

Fifty years ago I was landed at Smith’s dock,⁴ in this city, when quite a boy, and my first occupation was to drive a flock of sheep to Slater’s Hill to the butchers.⁵ It is fashionable to talk about “the good old times,” but to me they were bad old times. I was a boy then, and wanted to see the soldiers, but

BEING A BLACK BOY,

was not allowed to look in peace. I remember the time when the Baltimore roughs⁶ acted on the Donnybrook Fair motto, “Whenever you see a (nigger) head, hit it.” It wasn’t much matter to them how hard they hit, and if you dared to strike back, you did so at your peril. When every now and then there would be a great commotion a negro had struck a white man, and then the white men would raise the cry of “Down with him; kill the negro,” is Baltimore that way now? At that time worship was not safe, and for a colored person to be caught out as late as nine o’clock was to be taken to the watch house, if the watching had a mind to take him.⁷ Is it so now? I remember that in the Christian city of Baltimore, which has listened to

6. By the time Douglass returned to Baltimore from Talbot County in 1836, the city was witnessing increased crowd violence brought on by worsening economic conditions and the failure of the Bank of Maryland in 1834. Included in this violence were attacks on free blacks, who, though primarily employed as day laborers, draymen, and servants, had come to dominate such trades as those of barber and caulker. Claiming that free blacks were depriving them of jobs, Baltimore whites unsuccessfully petitioned the Maryland legislature in the 1830s and 1840s to restrict black entry into certain trades. In his autobiographies Douglass elaborates on an attack on him by four white carpenters while he was hired out to Baltimore shipbuilder William Gardner. Douglass, Narrative, 127-33; idem. Bondage and Freedom, 313; idem, Life and Times, 201-07; “The Condition of the Coloured Population of the City of Baltimore," Baltimore Literary and Religious Magazine, 4:174-75 (April 1838); James M. Wright, The Free Negro in Maryland, 1634-1860 (New York, 1921), 154-55, 172; Olson. Baltimore, 98-101; Berlin, Slaves without Masters, 217-49.

7. An act of 1831 forbade blacks from attending religious meetings unless a white clergyman or his appointee conducted them, although the large black populations of Baltimore and Annapolis could hold their own services by themselves with permission of a licensed white minister. In many local jurisdictions special laws provided for the whipping or temporary imprisonment of free blacks found on the streets after a certain hour—usually 9:00 P.M. in the winter and 10:00 P.M. in the summer. Jeffrey R. Brackett, The Negro in Maryland: A Study of the Institution of Slavery (Baltimore, 1889), 199-201. 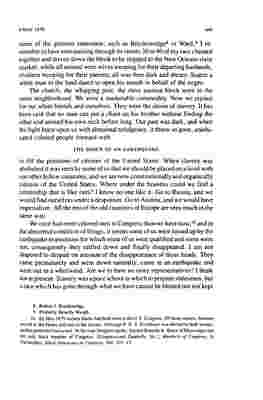 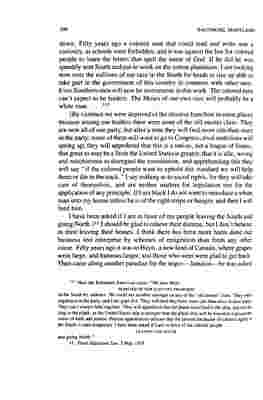