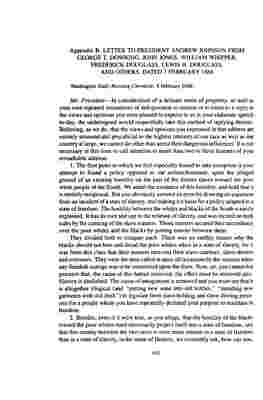 Mr. President—In consideration of a delicate sense of propriety, as well as your own repeated intimations of indisposition to discuss or to listen to a reply to the views and opinions you were pleased to express to us in your elaborate speech to-day, the undersigned would respectfully take this method of replying thereto. Believing, as we do, that the views and opinions you expressed in that address are entirely unsound and prejudicial to the highest interests of our race as well as our country at large, we cannot do other than arrest their dangerous inﬂuences. It is not necessary at this time to call attention to more than two or three features of your remarkable address:

1. The first point to which we feel especially bound to take exception is your attempt to found a policy opposed to our enfranchisement, upon the alleged ground of an existing hostility on the part of the former slaves toward the poor white people of the South. We admit the existence of this hostility, and hold that it is entirely reciprocal. But you obviously commit an error by drawing an argument from an incident of a state of slavery, and making it a basis for a policy adapted to a state of freedom. The hostility between the whites and blacks of the South is easily explained. It has its root and sap in the relation of slavery, and was incited on both sides by the cunning of the slave masters. Those masters secured their ascendancy over the poor whites and the blacks by putting enmity between them.

They divided both to conquer each. There was no earthly reason why the blacks should not hate and dread the poor whites when in a state of slavery, for it was from this class that their masters received their slave-catchers, slave-drivers and overseers. They were the men called in upon all occasions by the masters when any ﬁendish outrage was to be committed upon the slave. Now, sir, you cannot but perceive that, the cause of this hatred removed, the effect must be removed also. Slavery is abolished. The cause of antagonism is removed and you must see that it is altogether illogical (and “putting new wine into old bottles,” “mending new garments with old cloth”) to legislate from slave-holding and slave-driving premises for a people whom you have repeatedly declared your purpose to maintain in freedom.

2. Besides, even if it were true, as you allege, that the hostility of the blacks toward the poor whites must necessarily project itself into a state of freedom, and that this enmity between the two races is even more intense in a state of freedom than in a state of slavery, in the name of Heaven, we reverently ask, how can you,

Last edit over 2 years ago by Jannyp 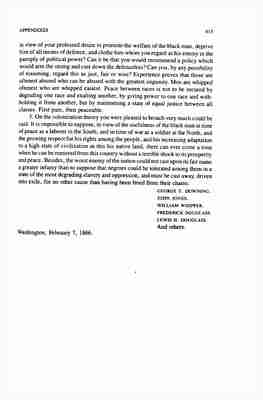 in view of your professed desire to promote the welfare of the black man, deprive him of all means of defence, and clothe him whom you regard as his enemy in the panoply of political power? Can it be that you would recommend a policy which would arm the strong and cast down the defenceless? Can you, by any possibility of reasoning, regard this as just, fair or wise? Experience proves that those are oftenest abused who can be abused with the greatest impunity. Men are whipped oftenest who are whipped easiest. Peace between races is not to be secured by degrading one race and exalting another, by giving power to one race and withholding it from another, but by maintaining a state of equal justice between all classes. First pure, then peaceable.

3. On the colonization theory you were pleased to broach very much could be said. It is impossible to suppose, in view of the usefulness of the black man in time of peace as a laborer in the South, and in time of war as a soldier at the North, and the growing respect for his rights among the people, and his increasing adaptation to a high state of civilization in this his native land, there can ever come a time when he can be removed from this country without a terrible shock to its prosperity and peace. Besides, the worst enemy of the nation could not cast upon its fair name a greater infamy than to suppose that negroes could be tolerated among them in a state of the most degrading slavery and oppression, and must be cast away, driven into exile, for no other cause than having been freed from their chains.