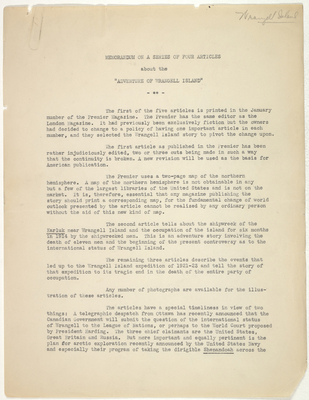 ﻿MEMORANDUM ON A SERIES OF FOUR ARTICLES

The first of the five articles is printed in the January number of the Premier Magazine. The premier has the same editor as the London Magazine. It had previously been exclusively fiction but the owners had decided to change to a policy of having one important article in each number, and they selected the Wrangell island story to pivot the change upon.

The first article as published in the premier has been rather injudiciously edited, two or three cuts being made in such a way that the continuity is broken. A new revision will be used as the basis for American publication.

The Premier uses a two-page map of the northern hemisphere. A map of the northern hemisphere is not obtainable in any but a few of the largest libraries of the United States and is not on the market. It is, therefore, essential that any magazine publishing the story should print a corresponding map, for the fundamental change of world outlook presented by the article cannot be realized by any ordinary person without the aid of this new kind of map.

The second article tells about the shipwreck of the Karluk near Wrangell Island and the occupation of the island for six months in 1914 by the shipwrecked men. This is an adventure story involving the death of eleven men and the beginning of the present controversy as to the international status of Wrangell Island.

The remaining three articles describe the events that led up to the Wrangell Island expedition of 1921-23 and tell the story of that expedition to its tragic end in the death of the entire party of occupation.

Any number of photographs are available for the illustration of these articles.

The articles have a special timeliness in view of two things: A telegraphic despatch from Ottawa has recently announced that the Canadian Government will submit the question of the international status of Wrangell to the League of Nations, or perhaps to the World Court proposed by President Harding. The three chief claimants are the United States, Great Britain and Russia. But more important and equally pertinent is the plan for arctic exploration recently announced by the United States Navy and especially their program of taking the dirigible Shenandoah across the 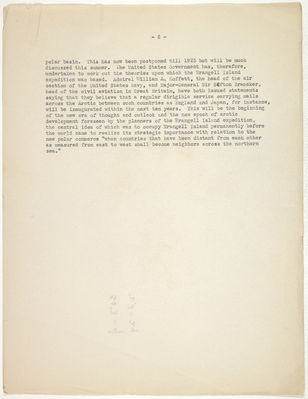 polar basin. this has now been postponed till 1925 but will be much discussed this summer. The United States] Government has, therefore, undertaken to work out the theories upon which the Wrangell Island expedition was based. Admiral William A. Moffett, the head of the air section of the United Stated Navy, and Major-General Sir [Sefton] Brancker, head of the civil aviation in Great Britain, have not issued statements saying that they believe that a regular dirigible service carrying mails across the Arctic between such countries as England and Japan, for instance, will be inaugrated within the next ten years. This will be the beginning of the new era of thought and outlook and the new epoch of arctic development foreseen by the planners of the Wrangell Island expedition, the central idea of which was to occupy Wrangell Island permanently before the world came to realize its strategic importance with relation to the new polar commerce "when countries that have been distant from each other as measured from east to west shall become neighbors across the northern sea."