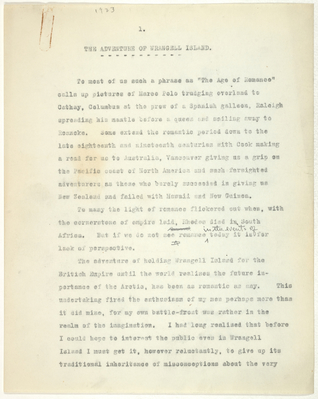 THE ADVENTURE OF WRANGELL ISLAND.

To most of us such a phrase as "The Age of Romance" calls up pictures of Marco Polo trudging overland to Cathay, Columbus at the prow of a Spanish galleon, Raleigh spreading his mantle before a queen and sailing away to Roanoke. Some extend the romantic period down to the late eighteenth and nineteenth centuries with Cook making a road for us to Australia, Vancouver giving us a grip on the Pacific coast of North America and such farsighted adventurers as those who barely succeeded in giving us New Zealand and failed with Hawaii and New Guinea.

To many the light of romance flickered out when, with the cornerstone of empire laid, Rhodes died in South Africa. But if we do not see romance in the events of today it is for lack of perspective.

The adventure of holding Wrangell Island for the British Empire until the world realises the future importsnce of the Arctic, has been as romantic as any. This undertaking fired the enthusiasm of my men perhaps more than it did mine, for my own battle-front was rather in the realm of the imagination. I had long realised that before I could hope to interest the public even in Wrangell Island I must get it, however reluctantly, to give up its traditional inheritance of misconceptions about the very 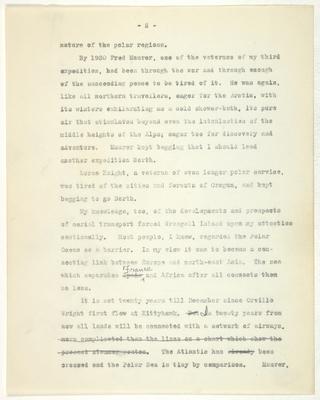 nature of the polar regions.

By 1920 Fred Maurer, one of the veterans of my third expedition, had been through the war and through enough of the succeeding peace to be tired of it. He was again, like all northern travellers, eager for the Arctic, with its winters exhilarating as a cold shower-bath, its pure air that stimulates beyond even the intoxication of the middle heights of the Alps; eager too for discovery and adventure. Maurer kept begging that I should lead another expedition North.

Lorne Knight, a veteran of even longer polar service, was tired of the cities and forests of Oregon, and kept begging to go North.

My knowledge, too, of the developments and prospects of aerial transport forced Wrangell Island upon my attention continually. Most people, I know, regarded the Polar Ocean as a barrier. In my view it was to become a connecting link between Europe and north-east Asia. The sea which separates Spain France and Africa after all connects them no less.

It is not twenty years till December since Orville Wright first flew at Kittyhawk. But In twenty years from now all lands will be connected with a network of airways. more complicated than the lines on a chart which show the present steamer routes. The Atlantic has already been crossed and the Polar Sea is tiny by comparison. Maurer, 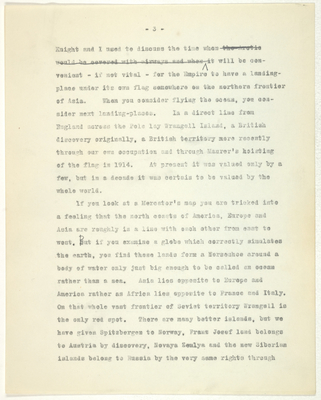 Knight and I used to discuss the time when the Arctic would be covered with airways and when it will be convenient - if not vital - for the Empire to have a landingplace under its own flag somewhere on the northern frontier of Asia. When you consider flying the ocean, you consider next landing-place. In a direct line from England across the Pole lay Wrangell Island, a British discovery originally, a British territory more recently through our own occupation and through Maurer's hoisting of the flag in 1914. At present it was valued only by a few, but in a decade it was certain to be valued by the whole world.

If you look at a Mercator's map you are tricked into a feeling that the north coasts of America, Europe and Asia are roughly in a line with each other from east to west. But if you examine a globe which correctly simulates the earth, you find these lands form a horseshoe around a body of water only just big enough to be called an ocean rather than a sea. Asia lies opposite to Europe and America rather as Africa lies opposite to France and Italy. On that whole cast frontier of Soviet territory Wrangell is the only red spot. There are many better islands, but we have given Spitzbergen to Norway, Franz Josef land belongs to Austria by discovery, Nevaya Zemlya and the new Siberian islands belong to Russia by the very same rights through 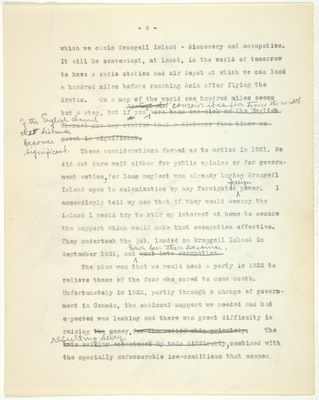 which we claim Wrangell Island - discovery and occupation. It will be convenient, at least, in the world of tomorrow to have a radio station and air depot at which we can land a hundred miles before reaching Asia after flying the Arctic. On a map of the world one hundred miles seems but a step, but if you realize that concern it as five times the width of the English Channel that distance becomes significant have been sea sick on the English Channel you may realize that a distance five times as great is significant.

These considerations forced us to motion in 1921. We did not dare wait either for public opinion or for government action, for long neglect was already laying Wrangell Island open to colonization by any farsighted foreign power. I accordingly told my men that if they would occupy the island I would try to stir up interest at home to secure the support which would make that occupation effective. They undertook the job, landed on Wrangell Island in September 1921, and have been there ever since went into occupation.

The plan was that we would send a party in 1922 to relieve these of the four who cared to come south. Unfortunately in 1922, partly through a charge of government in Canada, the national support we needed and had expected was lacking and there was great difficulty in raising the money. for the relief ship privately. The resulting delay late sailing occassioned by this difficulty, combined with the specially unfavourable ice-conditions that season 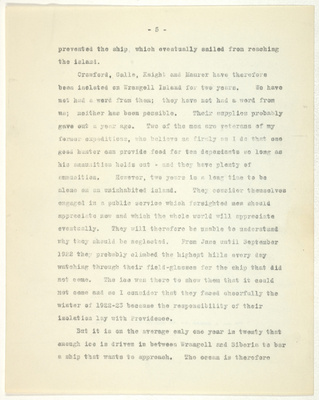 prevented the ship which eventually sailed from reaching the island.

Crawford, Galle, Knight, and Maurer have therefore been isolated on Wrangell Island for two years. We have not had a word from them; they have not had a word from us; neither has been possible. Their supplies probably gave out a year ago. Two of the men are veterans of my former expeditions, who believe as firmly as I do that one good hunter can provide food for ten dependants so long as his ammunition holds out - and they have plenty of ammunition. However, two years is a long time to be alone on an uninhabited island. They consider themselves engaged in a public service which farsighted men should appreciate now and which the whole world will appreciate eventually. They will therefore be unable to understand why they should be neglected. From June until September 1922 they probably climbed the highest hills every day watching through their field-glasses for the ship that did not come. The ice was there to show them that it could not come and so I consider that they faced cheerfully the winter of 1922-23 because the responsibility of their isolation lay with Providence.

But it is on the average only one year in twenty that enough ice is driven in between Wrangell and Siberia to bar a ship that wants to approach. The ocean is therefore