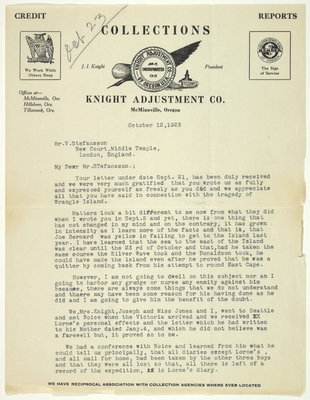 Your letter under date Sept. 21, has been duly received and we were very much gratified that you wrote us as fully and expressed yourself as freely as you did and we appreciate all that you have said in connection with the tragedy of Wrangle Island.

Matters look a bit different to me now from what they did when I wrote you in Sept.5 and yet, there is one thing that has not changed in my mind and on the contrary, it has grown in intensity as I learn more of the facts and that is, that Joe Bernard was yellow in failing to get to the Island last year. I have learned that the sea to the east of the Island was clear until the 23 rd of October and that,had he taken the same course the Silver Wave took and the Donaldson took, he could have made the island even after he proved that he was a quitter by coming back from his attempt to round East Cape.

However, I am not going to dwell on this subject nor am I going to harbor any grudge or nurse any enmity against him because, there are always some things that we do not understand and thaere may have been some reason for his having done as he did and I am going to give him the benefit of the doubt.

We ,Mrs. Knight,Joseph and Miss Jones and I, went to Seattle and met Noice when the Victoria arrived and we received XX Lorne's personal effects and the letter which he had written to his Mother dated Jany.4, and which he did not believe was a farewell but, it proved so to be.

We had a conference with Noice and learned from him what he could tell us principally, that all diaries except Lorne's , and all mail for home, had been taken by the other three boys and that they were all lost so that, all there is left of a record of the expedition, if is Lorne's diary. 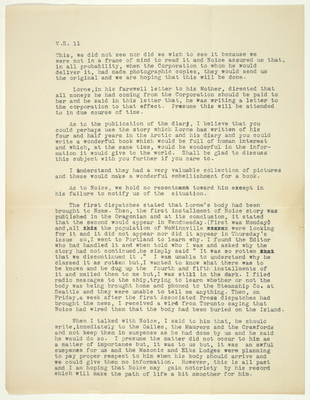 This, we did not see nor did we wish to see it because we were not in a frame of mind to read it and Noice assured us that, in all probability, when the Corporation to whom he would deliver it, had made photographic copies, they would send us the original and we are hoping that this will be done.

Lorne,in his farewell letter to his Mother, directed that all moneys he had coming from the Corporation should be paid to her and he said in this letter that, he was writing a letter to the corporation to that effect. Presume this will be attended to in due course of time.

As to the publication of the diary, I believe that you could perhaps use the story which Lorne has written of his four and half years in the Arctic and his diary and you could write a wonderful book which would be full of human interest and which, at the same time, would be wonderful in the information it would give to the world. Shall be glad to discuss this subject with you further if you care to.

I understand they had a very valuable collection of pictures and these would make a wonderful embellishment for a book.

As to Noice, we hold no resentment toward him except in his failure to notify us of the situation.

The first dispatches stated that Lorne's body had been brought to Nome. Then, the first installment of Noice story was published in the Oragonian and at its conclusion, it stated that the second would appear in Wendnesday. (First was Monday) and, all xxxx the population of McMinnville xxxxxx were looking for it and it did not appear nor did it appear in Thursday's issue so, I went to Portland to learn why. I found the Editor who had handled it and when told who I was and asked why the story had not continued, he simply said " It was so rotten xxxx that we discontinued it ." I was unable to understand why he classed it as rotten but,I wanted to know what there was to be known and he dug up the fourth and fifth installments of it and mailed them to me but, I was still in the dark. I filed radio messages to the ship, trying to learn whether or not the body was being brought home and phoned to the Steamship Co. at Seattle and they were unable to tell me anything. Then, on Friday ,a week after the first Associated Press dispatches had brought the news, I received a wire from Toronto saying that Noice had wired them that the body had been buried on the Island.

When I talked with Noice, I said to him that, he should write, immediately to the Galles, the Maurers and the Crawfords and not keep them in suspense as he had done by us and he said he would do so. I presume the matter did not occur to him as a matter of importance but, it was to us but, it was an awful suspense for us and the Masonic and Elks Lodges were planning to pay proper respect to him when his body should arrive and we could give them no information. However, this is all past and I am hoping that Noice may gain notoriety by his record which will make the path of life a bit smoother for him.

Last edit about 2 months ago by Samara Cary 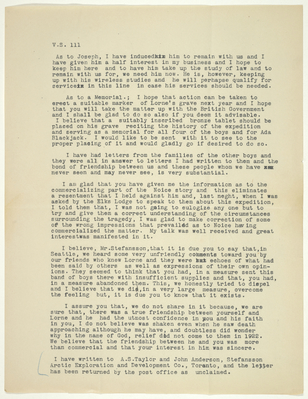 As to Joseph, I have inducedhim him to remain with us and I have given him a half interest in my business and I hope to keep him here and to have him take up the study of law and to remain with us for, we need him now. He is, however, keeping up with his wireless studies and he will perhapse qualify for servicein in this line in case his services should be needed.

As to a Memorial.; I hope that action can be taken to erect a suitable marker of Lorne's grave next year and I hope that you will take the matter up with the British Government and I shall be glad to do so also if you deem it advisable. I believe that a suitably inscribed bronze tablet should be placed on his grave reciting the history of the expedition and serving as a memorial for all four of the boys and for Ada Blackjack. I would like to be sent with it to see to the proper placing of it and would gladly go if desired to do so.

I have had letters from the families of the other boys and they were all in answer to letters I had written to them and the bond of friendship between us and these people whom we have nev never seen and may never see, is very substantial.

I am glad that you have given me the information as to the commercializing part of the Noice story and this eliminates a resentment that I held against him and, last neght, when I was asked by the Elks Lodge to speak to them about this expedition, I told them that, I was not going to eulogize any one but to try and give them a correct understanding of the circumstances surrounding the tragedy, I was glad to make correction of some of the wrong impressions that prevailed as to Noice having commercialized the matter. My talk was well received and great interestwas manifested in it.

I believe, Mr.Stefansson,that it is due you to say that,in Seattle, we heard some very unfriendly comments toward you by our friends who knew Lorne and they were but echoes of what had been said by others as well as expressions of their own opinions. They seemed to think that you had, in a measure sent this band of boys there with insufficient supplies and that, you had, in a measure abandoned them. This, we honestly tried to dispel and I believe that we did,in a very large measure, overcome the feeling but, it is due you to know that it exists.

I assure you that, we do not share in it because, we are sure that, there was a true friendship between yourself and Lorne and he had the utmost confidence in you and his faith in you, I do not believe was shaken even when he saw death approaching although he may have, and doubtless did wonder why in the name of God, relief did not come to them in 1922. We believe that the friendship between he and you was more than commercial and that your interest in him was sincere.

I have written to A.S.Taylor and John Anderson, Stefansson Arctic Exploration and Development Co., Toronto, and the letter has been returned by the post office as unclaimed. 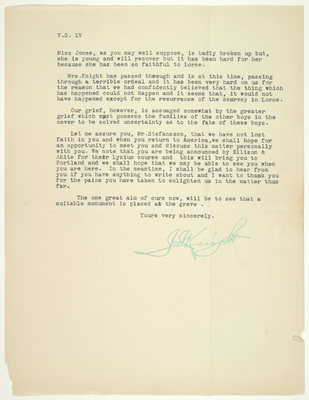 Miss Jones, as you may well suppose, is badly broken up but, she is young and will recover but it has been hard for her because she has been so faithful to Lorne.

Mrs.Knight has passed through and is at this time, passing through a terrible ordeal and it has been very hard on us for the reason that we had confidently believed that the thing which has happened could not happen and it seems that, it would not have happened except for the recurrance of the scurvey in Lorne.

Our grief, however, is assuaged somewhat by the greater grief which must possess the families of the other boys in the never to be solved uncertainty as to the fate of these boys.

Let me assure you, Mr.Stefansson, that we have not lost faith in you and when you return to America,we shall hope for an opportunity to meet you and discuss this matter personally with you. We note that you are being announced by Ellison & Ahite for their Lycium course and this will bring you to Portland and we shall hope that we may be able to see you when you are here. In the meantime, I shall be glad to hear from you if you have anything to write about and I want to thaak you for the pains you have taken to enlighten us in the matter thus far.

The one great aim of ours now, will be to see that a suitable monument is placed at the grave .