Lecture- "Crossing the Color Line: R & B and the Birth of Rock 'n' Roll" given at the National Endowment for the Humanities Summer Institute, Harvard University, 1995 July 17 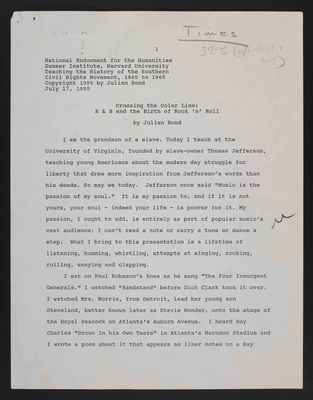 Crossing the Color Line: R & B and Birth of Rock 'n' Roll by Julian Bond

I am the grandson of a slave. Today I teach at the University of Virginia, founded by slave-owner Thomas Jefferson, teaching young Americans about the modern day struggle for liberty that drew more inspiration from Jefferson's words than his deeds. So may we today. Jefferson once said "Music is the passion of my soul." It is my passion to, and if it is not yours, your soul - indeed your life - is poorer for it. My passion, I ought to add, is entirey as part of popular music's vast audience; I can't read a note a note or carry a tune or dance a step. What I bring to this presentation is a lifetime of listening, humming, whistling, attempts at singing, rocking, rolling, swaying and clapping.

I sat on Paul Robeson's knee as he sang "The Four Insurgent Generals." I watched "Bandstand" before Dick Clark took it over. I watched Mrs. Morris, from Detroit, lead her young son Steveland, better known ater as Stevie Wonder, onto the stage of the Royal Peacock on Atlanta's Auburn Avenue. I heard Ray Charles "Drown in his Own Tears" in Atlanta's Herdon Stadium and I wrote a poem about it that appears as liner notes on a Ray

Last edit 4 months ago by LB 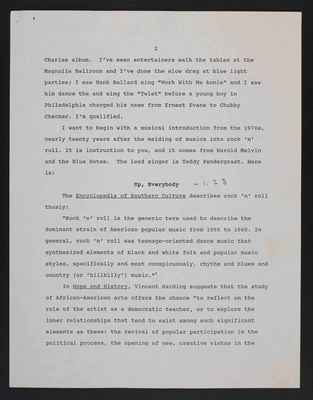 Charles album. I've seen entertainers walk the tables at the Magnolia Ballroom and I've done the slow drag at blue light parties; I saw Hank Ballard sing "Work With Me Annie" and I saw him dance the and sing the "Twist" before a young boy in Philadelphia changed his name from Ernest Evans to Chubby Checker. I'm qualified.

I want to begin with a musical introduction from the 1970s, nearly twenty years after the melding of musics into rock 'n' roll. It is instruction to you, and it comes from Harold Melvin and the Blue Notes. The lead singer is Teddy Pendergrast. Here is:

"Rock 'n' roll is the generic term used to describe the dominant strain of American popular music from 1955 to 1965. In general, rock 'n' roll was teenage-oriented dance music that synthesized elements of black and white folk and popular music styles, specifically and most conspicuously, rhythm and blues and country (or 'hillbilly') music."1

In Hope and History, Vincent Harding suggests that the study of African-American arts offers the chance "to reflect on the role of the artist as a democratic teacher, or to explore the inner relationships that tend to exist among such significant elements as these: the revival of popular participation in the political process, the opening of new, creative vistas in the 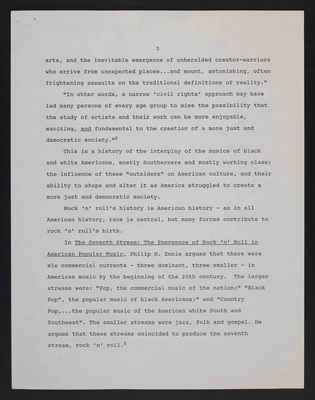 arts, and the inevitable emergence of unheralded creator-warriors who arrive from unexpected places...and mount, astonishing, often frightening assaults on the traditional definitions of reality."

"In other words, a narrow 'civil rights' approach may have led many persons of every age group to miss the possibility that the study of artists and their work can be more enjoyable, exciting, and fundamental to the creation of a more just and democratic society."2

This is a history of the interplay of the musics of black and white Americans, mostly Southerners and mostly working class; the influence of these "outsiders" on American culture, and their ability to shape and alter it as America struggled to create a more just and democratic society.

Rock 'n' roll's history is American history - as in all American history, race is central, but many forces contribute to rock 'n' roll's birth. In The Seventh Stream; The Emergence of Rock 'n' Roll in American Popular Music, Philip H. Ennis argues that there were six commercial currents - three dominant, three smaller - in American music by the beginning of the 20th century. The larger streams were: "Pop, the commercial music of the nation;" "Black Pop", the popular music of black Americans;" and "Country Pop,...the popular music of the American white South and Southwest". The smaller streams were jazz, folk and gospel. He argues that these streams coincided to produce the seventh stream, rock 'n' roll.3 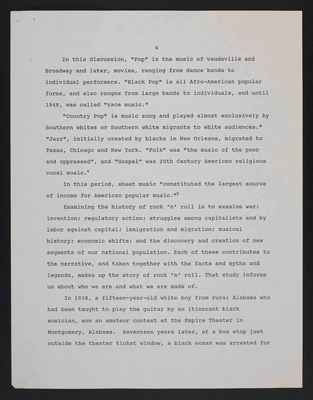 In this discussion, "Pop" is the music of vaudeville and Broadway and later, movies, ranging from dance bands to individual performers. "Black Pop" is all Afro-American popular forms, and also ranges from large bands to individuals, and until 1948, was called "race music."

"Country Pop" is music sung and played almost exclusively by Southern whites or Southern white migrants to white audiences." "Jazz", initially created by blacks in New Orleans, migrated to Texas, Chicago and New York. "Folk" was the "music of the poor and oppressed", and "Gospel" was 20th Century American religious vocal music.4

In this period, sheet music "constituted the largest source of income for American popular music."5

Examining the history of rock 'n' roll is to examine war; invention; regulatory action; struggles among capitalists and by labor against capital; immigration and migration; musical history; economic shifts; and the discovery and creation of new segments of our national population. Each of these contributes to the narrative, and taken together with the facts and myths and legends, makes up the story of rock 'n' roll. That study informs us about who we are and what we are made of.

In 1938, a fifteen-year-old white boy from rural Alabama who had been taught to play the guitar by an itinerant black musician, won an amateur contest at the Empire Theater in Montgomery, Alabama. Seventeen years later, at a bus stop just outside the theater ticket window, a black woman was arrested for 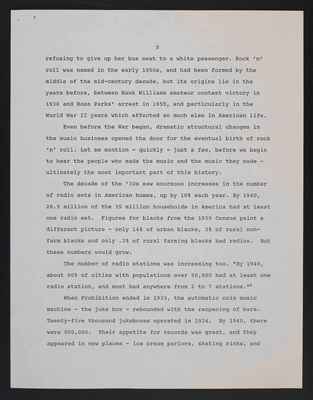 refusing to give up her bus seat to a white passenger. Rock 'n' roll was named in the early 1950s, and had been formed by the middle of the mid-century decade, but its origins lie in the years before, between Hank Williams amateur contest victory in 1938 and Rosa Parks' arrest in 1955, and particularly in the World War II years which affected so much else in American life.

Even before the War began, dramatic structural changes in the music business opened the door for the eventual birth of rock 'n' roll. Let me mention - quickly - just a few, before we begin to hear the people who made the music and the music they made - ultimately the most important part of this history.

The decade of the '30s saw enormous increases in the number of radio sets in American homes, up by 10% each year. By 1940, 28.5 million of the 35 million household in America had at least one radio set. Figures for blacks from the 1930 Census paint a different picture - only 14% of urban blacks, 3% of rural non-farm blacks and only .3% of rural farming blacks had radios. But these numbers would grow.

The number of radio stations was increasing too. "By 1940, about 90% of cities with populations over 50,000 had at least one radio station, and most had anywhere from 2 to 7 stations."6

When Prohibition ended in 1933, the automatic coin music machine - the juke box - rebounded with the reopening of bars. Twenty-five thousand jukeboxes operated in 1934. By 1940, there were 500,000. Their appetite for records was great, and they appeared in new places - ice cream parlors, skating rinks, and