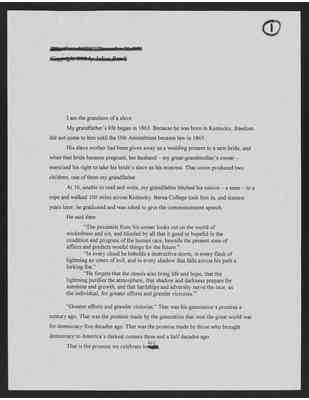 My grandfather's life began in 1853. Because he was born in Kentucky freedon did not come to him until the 13th Amendment became law in 1865.

His slave mother had given away as a wedding present to a bride, and when that bride became pregnant, her husband - my great-grandmother's owner - excerised his right to take his bride's slave as his mistress. The union produced two children, one of them my grandfather.

At 16, unable to read and write, my grandfather hitched his tuition - a steer - to a rope and walked 100 miles across Kentucky. Berea College took him in, and sixteen years later, he graduated and was asked to give the commencement speech.

He said then" "The pessimist from his corner looks out on the world of wickedness and sin, and blinded by all that is good or hopeful in the condition and progress of the human race, bewails the present state of affairs and predicts woeful things for the future"

"In every cloud he beholds a destructive storm, in every flash of lightening an omen of evil, and in every shadow that falls across his path a lurking foe."

"He forgets that the clouds also bring life and hope, that the lightening purifies the atmosphere, that shadow and darkness prepare for sunshine and growth, and that hardships and adversity nerve the race, as the individual, for greater efforts and grander victories."

That is the promise we celebrate tonightday.

Last edit 4 months ago by Queen 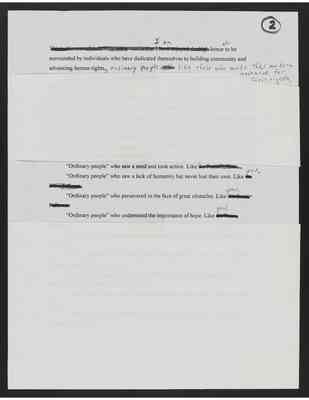 2 This is the second time in as many weeks that I have enjoyed the high I am honored to be surrounded by individuals who have dedicated themselves to building community and advancing human rights, ordinary people who like those who made the modern movement for civil rights.

"Ordinary people" who saw a lack of humanity but never lost their own. Like you the Petra Fellows .

"Ordinary people" who persevered in the face of great obstacles. Like you the Petra Fellows

"Ordinary people" who understood the importance of hope. Like you the Petra

Last edit 2 months ago by MaryV 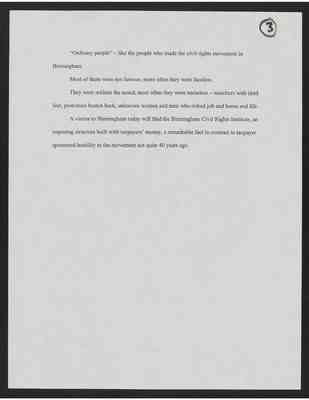 3 "Ordinary people" - like the people who made the civil rights movement in Birmingham.

Most of them were not famous; more often they were faceless.

They were seldom the noted; most often they were nameless - marchers with tired feet, protestors beaten back, unknown women and men who risked job and home and life.

A visitor to Birmingham today will find the Birmingham Civil Rights Institute, an imposing structure built with taxpayers' money, a remarkable fact in contrast to taxpayer sponsored hosility to the movement not quite 40 years ago.

Last edit 3 months ago by MaryV 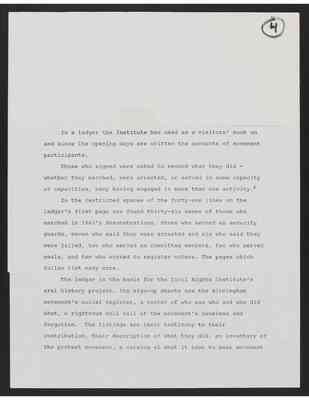 4 In a ledger the Institute has used as a visitors' book on and since its opening days are written the accounts of movement participants.

Those who signed were asked to record what they did - whether they marched, were arrested, or served in some capacity or capacities, many have engaged in more than one activity. 8

The ledger is the basis for the Civil Rights Institute's oral history project. Its sign-up sheets are the Birmingham movement's socail register, a roster of who was and who did what, a righteous roll call of the movement's nameless and forgotten. The listings are their testimony to their testimoy to their contribution, their description of what they did, an inventory of the protest movement, a catalog of what it took to make movement

Last edit 4 months ago by Queen 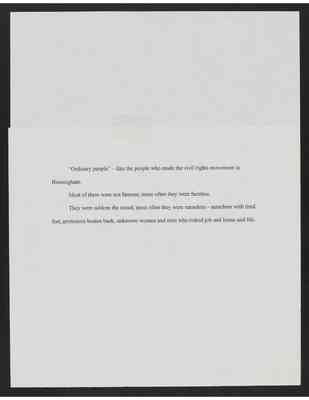 "Ordinary people" - like the people who made the civil rights movement in Birmingham.

Most of them were not famous; more often they were faceless.

They were seldom the noted; most often they were nameless - marchers with tired feet, protestors beaten back, unknown women and men who risked job and home life.