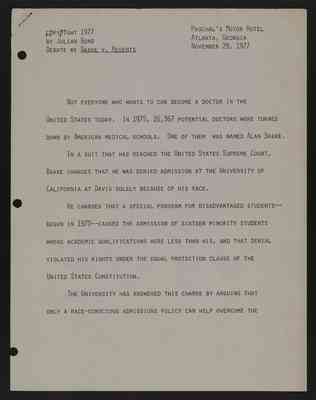 Not eveyone who wants to can become a doctor in the United States today. In 1975, 26,367 potential doctors were turned down by American medical schools. One of them was named Alan Bakke.

In a suit that has reached the United States Supreme Court, Bakke charges that he was denied admission at the University of California at Davis solely because of his race.

He charges that a special program for disadvantagd students--begun in 1970--caused the admission of sixteen minority students whose academic qualifications were less than his, and that denial violated his rights under the equal protection clause of the United States Constitution. 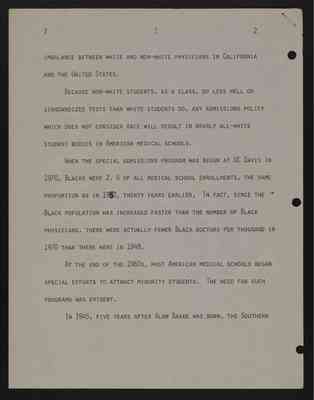 imbalance between white and non-white physicians in California and the United States.

Because non-white students, as a class, do less well on standardized tests than white students do, any admissions policy which does not consider race will result in nearly all-white student bodies in American medical schools.

When the special admissions program was begun at UC Davis in 1970, blacks were 2. 6 of all medical school enrollments, the same proportion as in 1950, twenty years earlier, in fact, since the black population has increased faster than the number of black physicians, there were actually fewer black doctors per thousand in 1970 than there were in 1948.

At the end of the 1960s, most American medical schools began special efforts to attract minority students. The need for such programs was evident.

In 1945, five years after Alan Bakke was born, the southern 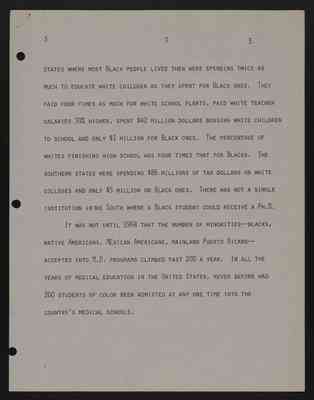 States where most black people lived then were spending twice as much to educate white children as they spent for black ones. They paid four times as much for white school plants, paid white teacher salaries 30% higher, spent $42 million dollars bussing white children to school and only $1 million for black ones. The percentage of whites finishing high school was four times that for blacks. The southern states were spending $86 millions of tax dollars on white colleges and only $5 million on black ones. There was not a single institution in the South where a black student could receive a Ph.D.

It was not until 1968 that the number of minorities--Blacks, native Americans, Mexican Americans, mainland Puerto Ricans--accepted into M.D. programs climbed past 200 a year. In all the years of medical education in the United States, never before had 200 students of color been admitted at any one time into the country's medical schools. 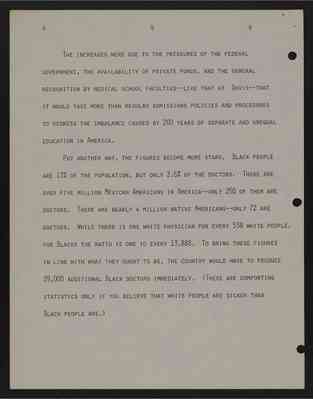 The increases were due to the pressures of the Federal Government, the availability of private funds, and the general recognition by medical school facilities -- like that at Davis -- that it would take more than regular admissions policies and procedures to redress the imbalance caused by 200 years of separate and unequal education in America.

Put another way, the figures become more stark. Black people are 13% of the population, but only 2.6% of the Doctors. There are over five million Mexican Americans in America -- only 250 of them are Doctors. There are nearly a million Native Americans -- only 72 are Doctors. While there is one white Physician for every 538 white people, for blacks the ratio is one to every 13,888. To bring these figures in line with what they ought to be, the Country would have to produce 29,000 additional black Doctors immediately. (These are comforting statistics only if you believe that white people are sicker than black people are.)

Last edit 3 months ago by MaryV 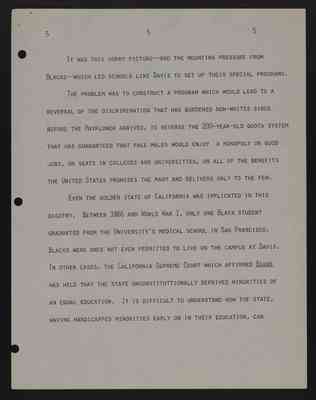 It was this sorry picture -- and the mounting pressure from Blacks -- which led schools like Davis to set up their special programs.

The problem was to construct a program which would lead to a reversal of the discrimination that has burdened non-whites since before the Mayflower arrived, to reverse the 200-year-old quota system that has guaranteed that pale males would enjoy A monopoly on good jobs, on seats in Colleges and Universities, on all of the benefits the United States promises the many and delivers only to the few.

Even the golden state of California was implicated in this bigotry. Between 1866 and World War I, only one Black student graduated from the University's Medical School in San Francisco. Blacks were once not even permitted to live on the Campus at Davis. In other cases, the California Supreme Court which affirmed Bakke has held that the State unconstituttionally deprived minorities of an equal education. It is difficult to understand how the State, having handicapped minorities early on in their education, can